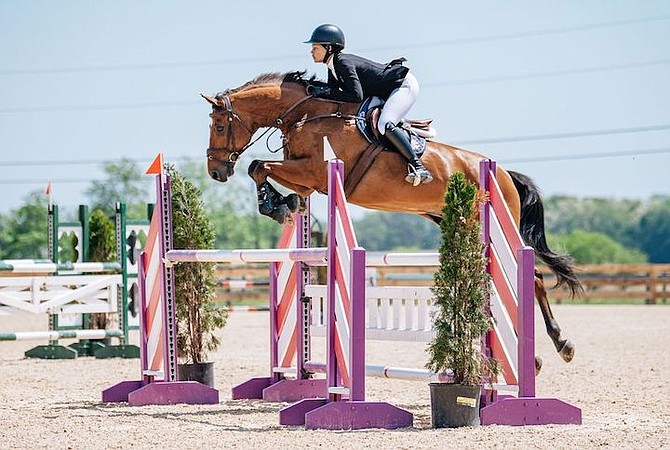 KACY Lyn Smith and her horse Chicago M rode a double clear round at Loudoun County, Virginia, this weekend and, in doing so, made history as the first Bahamian junior rider to qualify for the FEI North American Youth Jumping Championships.

The event is set to be held at the Great Lakes Equestrian Festival in Traverse City, Michigan, in August.

The prestigious FEI Youth Jumping Championships provides an exciting opportunity for young equestrians to compete against their peers, mirroring the format of senior championships such as the Olympic Games.

Team and individual competitions in each age category are held over multiple days.

Sixteen-year-old Smith, who lives in Virginia and trains with Kama Godek of Capital Area Premium Sporthorses, will compete for The Bahamas as an individual in the Pre-Junior Championship category.

This category is for riders 14-16 years old and features courses at fence heights of 1.30 metres.

Qualifying for the championships wasn’t even on Smith’s radar a month ago. When discussing qualification scenarios with federation officials back in mid-May, Smith was honest – it might not be an option.

Qualification deadlines were fast approaching, but she had just started riding a new horse (Chicago M, a 17.1 hh, 12-year-old Holsteiner recently imported from Germany). As a team, they were just getting to know one another.

“I’d only jumped him for the first time three days before,” said Smith. “I [was] still figuring him out.”

Yet Smith and her trainer Kama Godek believed it could be done. They began campaigning to immediate success. After clear rounds at 1.15m, 1.20m and 1.25m at Swan Lake, the pair travelled to the prestigious Upperville Horse Show in Middleburg, VA. The weekend started inauspiciously when Smith suffered a fall: “He jumps extremely athletically and tends to jump me out of the tack,” she noted.

Luckily neither horse nor rider were hurt, and the pair finished the weekend strong, going double clear and placing 9th in a competitive field in the $2,500 1.25m Classic. At that moment Smith and her trainer made the decision to move up to the 1.30m class at Loudoun. It was the right decision. Smith and Chicago jumped double clear, finishing 5th overall, winning a share of the prize money…and securing the coveted certificate of capability for qualification to the FEI North American Youth Jumping Championships.