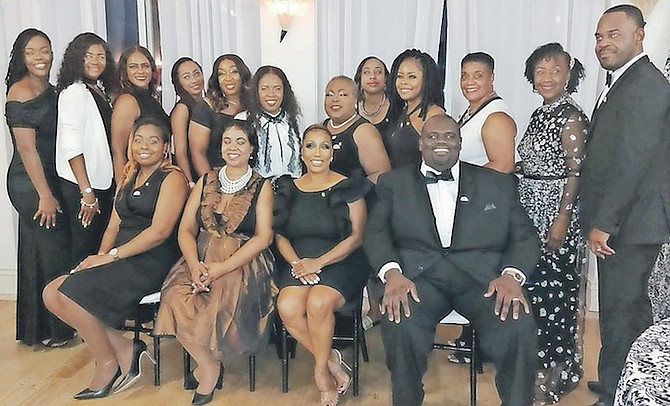 THE Sunset Pilot Club of Grand Bahama has made history as the first chartered co-ed Pilot Club on the island.

Franklyn McCoy is to be the first male president of the club, which has some 20 members and is affiliated with Pilot International.

Pilot International, which focuses on young leadership and brain safety and health, is celebrating 100 years of existence. At the 2021 Annual Pilot Convention and Leadership Conference in Atlanta, Georgia, Pilot President Collet Cross challenged each district to grow its membership by sponsoring new clubs.

There are now two local Pilot organisations in Grand Bahama. Under the leadership of Pilot District Governor Karen Ferguson Bain, the new Sunset Club was officially chartered on January 22, 2022, with 17 charter members.

Mr McCoy said he became interested in joining the organisation after assisting Pilot member Toni Hudson Bannister at their various community service initiatives and learning about its platform concerning brain safety and health.

He said the 20 Sun setters are looking forward to organising community service initiatives to assist youth organisations on the island.

“We have adopted the GB Children’s Home, The Beacon School, and Hugh Campbell Primary School for our youth-focused projects, which will be hosted in partnership with Anchor Club Lucaya Club Project division.

Mr McCoy said the club is also planning to celebrate his birthday with the pre-school department at Hugh Campbell Primary. He said the club also hopes to sponsor a new Anchor Club in the West End District and work closely with newly chartered Compass Club for colleges students and young professionals.

He said that Sunset Club will also be partnering with the Rand Memorial Hospital Maternity Ward to provide assistance to underprivileged mothers, as well as promoting Brain Awareness by hosting a Brain Wellness Fair and other brain safety and health initiatives.

President McCoy said they will also recognise caregivers every month by treating them to something special.

The club held installation officers on June 11 at the Aqua Restaurant at Old Bahama Bay Resort in West End. The installation was conducted by Governor Karen Ferguson Bain.

In addition to President McCoy, members of the executive board are Melissa Sears, President Elect; Elizabeth Higgs-Green, Treasurer; and Nicole Thompson, Secretary.

He said the club is pleased to have welcomed three new members, bringing the total membership to 20 – 18 women and two men - in the short five months since its charter.

Due to Covid protocols, Mr McCoy said the club meets virtually via Zoom the fourth Thursday of each month at 6pm.