Crowdfunder aiming to be ‘next Bamboo Shack’ 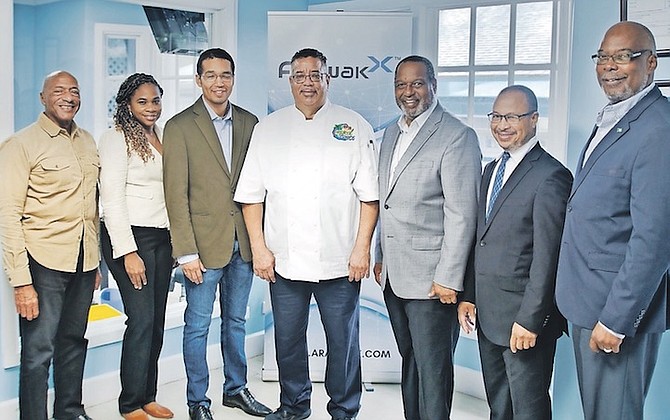 A Bahamian restaurant entrepreneur yesterday unveiled ambitions to become “the next Bamboo Shack” after raising almost one-third of his minimum $320,000 capital target within the first ten days.

Chef Kevin Culmer, founder of Palmdale-based Tropical Gyros, told Tribune Business he was “ecstatic” after some 195 investors committed to investing a collective $104,000 in the five year-old business during the first days of its crowd funding raise via the ArawakX platform.

Hitting the $320,000 minimum will enable the restaurant to “hire another 30 people in the next three months” through moving its present Rosetta Street location to a larger nearby premises, expanding to a second location in the Carmichael area and purchasing a food truck. And Chef Culmer disclosed that it will also set the stage for expansion throughout The Bahamas, Caribbean and even into the US via a franchising model.

Revealing that its gyros, salads and bowl offerings have already attracted interest from potential partners in Jamaica and Turks & Caicos, as well as the US, he said a successful crowdfunding raise will enable Tropical Gyros to “quicken the pace” of its growth plans. The restaurant is focused on proving its business model is sustainable in The Bahamas first, and that it “can support more than one operation”, before seeking to franchise internationally over the medium term.

“It seems to be gaining some momentum, which is good for us,” Chef Culmer said of retail investor response to the ArawakX crowdfunding. “It’s also good for Bahamian entrepreneurs who are hopeful of raising funds. I think it’s already exceeded our expectations.

“The whole platform is new to Bahamians, and it’s not necessarily like a BISX-listed company where you will be trading the shares up and down. This is using money to fund expansion and growth potential. The fact we’ve been able to garner that attention and response in the first ten days of the launch, I’m ecstatic and it gives me cautious optimism we will be able to achieve the minimum raise at least.”

Tropical Gyros is targeting a minimum capital raise from Bahamian investors of $320,000, with the maximum set at $850,000. “If we can hit the $320,000 that will put us in good stead to get some things done,” Chef Culmer explained. “One of the things we’re planning to do is that we’re challenged with the space we have right now. Like Roy Schneider, the actor who played the main character in the movie, Jaws, said when he first saw the shark: We need a bigger boat.

“I’m kind of in that spot at Rosetta Street. We’re looking to move down at least two streets to a 1,500 square foot location, upgrading Rosetta Street to a higher spot. That [a successful capital raise] also allows us to do a production and distribution centre, and we can open another unit at Carmichael or Cable Beach and purchase a food truck. These things will put us in a good position to move forward.”

Chef Culmer said Carmichael is “more preferable at this time” to Cable Beach due to its greater population and presence of more businesses, while the Cable Beach location that Tropical Gyros is seeking is presently not available. “You don’t open for the sake of opening up,” he added. “You want to be strategic. Carmichael makes better sense at this time for a second location.”

The food truck will enable the restaurant to “generate buzz” around New Providence by taking its products into different communities. And it will also be used to pave Tropical Gyros’ entry into new markets, giving it the ability to visit various Family Islands and spark franchise partner interest.

Confirming that Freeport is a particular target, once the Grand Lucayan resort has been sold and started to re-open, Chef Culmer said: “I’ve spoken already to someone who is interested in getting the franchise rights for that area. I have someone wanting to do Eleuthera, someone looking at Turks & Caicos and someone looking at Jamaica. We have some people who have recognised the product we have, the brand we have, and the possibilities we have for expansion.

“The crowdfunding platform gives people like myself and other aspiring entrepreneurs an opportunity to test the waters, get that reputation and take the business forward. A lot of people who have invested are customers of ours. They feel the flavour and see the business coming in.”

“She’s done a remarkable job, and I look at Ms Pinder as a model of consistency to see how she has been able to advance her business, advance her brand, and we will do our best to emulate the success she’s had. People say I’m a dreamer, and I say everything starts with a dream and you have to go after it. I believe we’ve created a product that will stand up in the international food market, it’s a Bahamian-created product, and we’re taking 242 to the world.”

Tropical Gyros currently has 12 employees, divided between 12 full-time and two part-time staff. Chef Culmer revealed one had just been hired on Monday, and said the planned Carmichael outlet will have double the operating hours currently enjoyed at Rosetta Street.

With Carmichael set to open until 11pm, he added that it will require 20-25 employees to cover two-and-a-half shifts. And the production/distribution centre will need another six recruits. “If the raise is successful we will be trying to hire another 30 employees in the next three months,” Chef Culmer told Tribune Business. “It’s going to open the door.”

Affirming that Tropical Gyros will seek to give staff “a leg up” via training and promotions that will enable staff to rise through the ranks, Chef Culmer said he had made a conscious decision to offer starting salaries that were slightly higher than those typically found in the restaurant industry.

These were typically pegged at $7 per hour, above the present minimum wage, with experienced front-line workers enjoying around $10 per hour. Weekly take-home pay, he added, was “close to $350 per week”. Chef Culmer said: “We’re trying to give people an opportunity. The company’s philosophy is we’re not trying to become multi-millionaires on the backs of our staff.

“We want to provide a living wage for staff to make it in this world. That inflation is no joke. Our food costs have gone up 7 percent right now. But sales have increased, so labour costs as a percentage of sales have dropped from 19 percent to 12 percent. With that it becomes feasible to run at 7 percent higher cost of goods because sales balance it out.”

Still, Chef Culmer said Tropical Gyros was feeling the inflationary pinch like all other businesses. He cited as an example a 200-pound case of boneless chicken thighs purchased from Sysco Bahamas/Bahamas Food Services, which had risen in price from $45 to $200, although this was prior to the Budget duty cuts.

Revealing that he has invested several hundred thousand dollars into the business to-date, Chef Culmer said he had suffered a $125,000 on his previous effort to establish a second outlet at The Pointe complex in downtown Nassau. While that delayed Tropical Gyros’ expansion plans, it also opened his eyes to the need to secure a stronger capital base to buttress the business against other future shocks.

“When we opened at The Pointe, the first five months were rough,” Chef Culmer revealed. “And just as we started to turn the corner from an operational and financial perspective, COVID hit.” While that location suffered a $5,000 monthly operating loss over its first five months, this was cut to just $850 in February 2020 and by the first two weeks of March it had reached a “break even” point.

“Then COVID hit. Rent of $4,200 a month with no revenue coming in is tough. We tried to hold on as long as we could. I don’t think we were financially stable enough to expand at that time,” he told this newspaper. Chef Culmer also alleged that he was undermined by the failure of a verbal deal he agreed with an investor partner, who he declined to name.

Chef Culmer said that, having overcome this adversity, he is now focusing on completing the crowdfunding raise and proving his model is sustainable in The Bahamas. Revealing that he had been contacted by a major US food group, who he declined to name, about taking the Tropical Gyros brand name to the US, he suggested that such expansion may occur within two to three years if all goes to plan.

Presumptuous flaw new startup comrades to kick off by indulging themselves to the likes and successes of a Bamboo Shack. ― Yes?