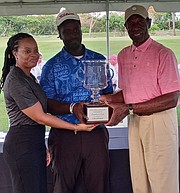 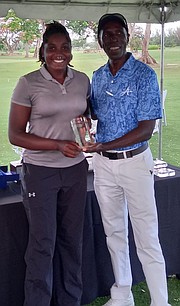 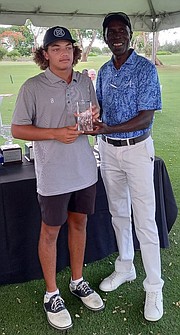 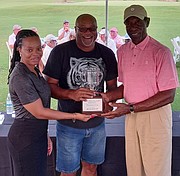 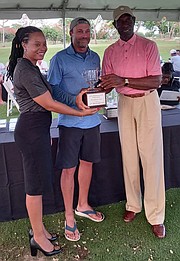 After four gruelling rounds of competition at various sites on the island, Heathcliff Kane and Ashley Michel were crowned the Bahamas Golf Federation’s men and women national amateur golf champions.

In a lesser competition over two days, three-time national champion Richard Gibson Jr, who opted not to participate in the four-day competition, emerged as the champion of the President’s Cup held over the final two days of the tournament.

The tournament got started at the Ocean Club on Paradise Island on Monday and moved to Lyford Cay and Albany on Tuesday and Wednesday before it wrapped up on Thursday at the Royal Blue at the Baha Mar Resort. However, the awards presentation took place at the BGF’s Driving Range immediately after the competition of the tournament yesterday where Kane and Michel were the first two competitors to book their tickets on the BGF’s national team heading to the Caribbean Amateur Golf Championships in August. They will be a part of a six male and four female team heading to the Turks and Caicos.

The remainder of the team will be decided by a playoff that the BGF will stage on Saturday and Sunday, July 2-3 at Lyford Cay.

It’s the first trip that Kane will be making to represent the Bahamas. He, along with men’s national runner-up Alex Dupuch as they head the junior national team leaving on Sunday for the Caribbean Amateur Junior Golf Championships (CAJGC), scheduled for June 28-30 in Puerto Rico.

“I played well on the first day and then after that, I kind of lost my swing and I struggled over the next three days,” said Kane, who finished with a four-day total score of 141.

“Luckily, I was ahead enough to hold on for the win. It was a tough competition because Alex really pushed me.”

Kane, 19, said he wanted to use the tournament to prepare or the trip to the Turks and Caicos Islands next week.

Dupuch, a 17-year-old student of Windsor Academy, trailed Kane with 150, but he also admitted that it was good to play in a high level tournament to get ready for the national team tournament next week.

“I struck the ball very well. I just had some mental mistakes in putting that threw me off,” Dupuch said. “The competition was good. Heathcliff made me fight for it. I think we made each other play a lot better.”

Back home from college in Iowa where she enjoyed her freshman year, Maicel captured the ladies’ title with a total of 161, one stroke better than runner-up A’Marie Smith, who came through with 162.

“It’s always good to be back home. It was a difficult tournament, but it turned out pretty good for me,” Maicel said. “It was quite competitive for me, but I played well against my rivals, whom I have played against for a long time.”

Smith, an 18-year-old freshman at TSU, said minus the culture shock, she was delighted with her performance so far.

“The tournament was great. It was challenging, especially over the last two days,” Smith said. “I played with some of the girls whom I knew for a while, but it was a good experience playing against them now, considering that the majority of us just got back from school.”

For Gibson Jr, who had a scheduling problem and was unable to play the entire four days, said he was impressed with his performance over the final two days in the President’s Cup.

“I played great. Today, I didn’t play as well as I expected, but it was good enough to win the President’s Cup,” said Gibson, the last national amateur champion before COVID-19 struck and forced the BGF to put the championship on hold until this year.

Despite not playing, Gibson Jr said he was thrilled to watch the performances of Kane and Dupuch as they battled it out for the national amateur title. He noted that he hopes to be back next year to regain his crown.

BGF president Lynford Miller said they were pleased with the way the tournament was staged. “From what I’m hearing, everybody enjoyed themselves and they had a lot of fun,” said Miller, who also participated in the tournament.

“It was very competitive. I think based on the smiles from everybody, everybody enjoyed themselves.”

As a big supporter of young people, Jackie Cleare, the AVP of operations of the RC Bank and Trust, said they were pleased to put their money behind the success of the tournament.

“Golf is a sport that requires discipline and it helps young people to expand their horizon, that is why we have decided to continue to sponsor the tournament,” Cleare said. “So we will continue to support the event because we like what we saw with the participation of the young golfers in the tournament this year.”