Davis says govt will ‘hold the line’ on NIB increase 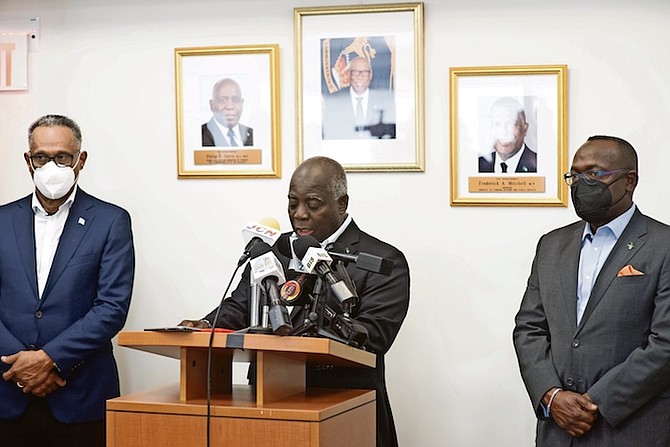 AN increase in National Insurance Board contributions will not come off the table until the Davis administration decides whether or not to accept the recommendations of experts regarding the sustainability of the NIB fund, Prime Minister Philip “Brave” Davis said yesterday.

Mr Davis said the decision will come down to an assessment of fiscal issues and a determination of how to alleviate the financial burden on poor Bahamians.

Back in April, The Tribune exclusively reported that the 11th actuarial review of the National Insurance Board predicted that the fund could be depleted by 2028 should officials neglect to take urgent action. That report had reduced the fund’s potential depletion timeline by one year, as the 10th review had made a prediction of 2029.

Despite this, Mr Davis said at the time that an increase was not being considered by his government.

However, the issue was rehashed yesterday after a local daily reported the recommendation is to increase the contribution rate by two percent next month and continue increases every two years until 2036 to ensure the fund’s financial sustainability.

Mr Davis said the findings of the report were not new and until a decision is made, the government will continue to “hold the line”.

“If you took into context what I said then was that coupled with all of the challenges that the Bahamian people were experiencing at the time we were not minded to follow the recommendations at that time,” Mr Davis told reporters yesterday. “The report is nothing new. We expected the same report.

“They are the technocrats that are advising us. We are the directorate. We have to find ways and means of softening any increases that are put on the backs of the Bahamian people.

“I have not seen the latest report nor that I am surprised by it, but upon reviewing it and having regard to all of the other initiatives that we have in growing the economy and seeking other means of revenues for the country we’ll take that into account to determine what best and how best to address the national insurance issues.”

Asked to say whether an increase, as suggested was on the table, Mr Davis said: “A recommendation has been made. It doesn’t come off the table until we decide whether or not to accept that recommendation. We have not yet done that.

“As indicated we have to assess all of our other fiscal issues, ie, how the economy is going to be growing, will we be obtaining new revenues, how effective our collection efforts through the new Revenue Enhancement Unit, will be to determine how we will address that and if we could find a ways and means to alleviate the burden on poor Bahamians or on the worker we will do so.”

“We hear the experts. We do not discount their concern nor do we discount their recommendations but our responsibility is to see how we could keep relief (for) the least among us and that’s what we are doing.

“We are just searching to try to find initiatives that may cause us to avoid having to do what is being recommended or if we do that what safety net we are going to put in place for those persons who are going to be impacted by any increases.

The so called experts are ignoring the biggest hinderance to the sustainability of NIB and solving it. Stop allowing government to use it as a slush fund.

If government cannot use NIB funds willy nilly, the issue would be resolved immediately.

Agree. Government & Exec Board have made bad decisions for short sighted political gains that have undermined NIB for the past 20 years. Ingraham was the main culprit that started this downward slide.

Kicking the can down the road, while trying "to be all things to everyone" has placed NIB in this bad state of affairs. NIB retires its staff at 60, now it wants everyone else to work until 67. The plush senior executive salaries and perks is a contradiction to what it is now preaching.

NIB needs to clean house and be more accountable before Bahamians can buy the request to hike our deductions to over 20% by mid 2030s.

I think NIB should invest our savings into renovating the hundred or so government buildings that are unused and in disrepair. That way government can hire lots of people for years and maybe some politicians will even earn a well deserved kick-back on the various contracts. It's a win/win for government and their friends.

AN increase in National Insurance Board contributions will not come off the table until the Davis administration decides whether or not to accept the recommendations of experts regarding the sustainability of the NIB fund, Prime Minister Philip “Brave” Davis said yesterday.

Translation: "Whether y'all like it or not, ya gonna be royally shafted with a big increase in your national insurance contributions before the middle of next year because my government needs more of your funds put in that Ponzi scheme to fritter away."

Here's when you need the National Lotto for NIB contributions.

$500 million of NIB funds were invested in Govt building projects over the past 50 years.

Can Myles tell us how much is that NIB investment worth today?