Junior girls hope to ‘get back into medal round’ 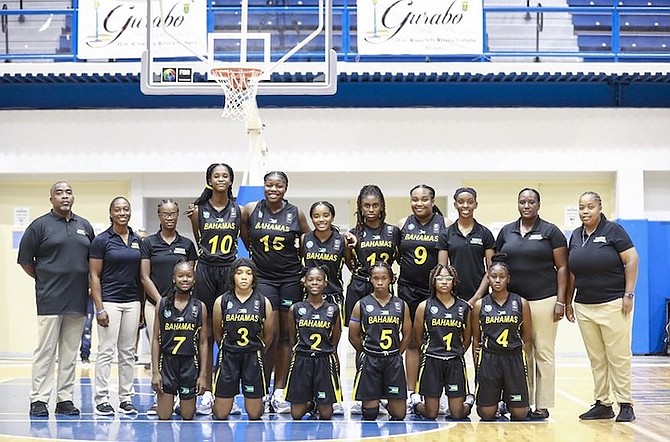 The Bahamas under-15 girls basketball team at the FIBA Centrobasket Under-15 Girls Championship at the Coliseo Fernando ‘Rube’ Hernandez in Gurabo, Puerto Rico.

Head coach Varel Davis said the Bahamas junior girls national team is a very young team, but they are performing as best as they can at the FIBA Centrobasket Under-15 Girls Championship.

The week-long championships, which follows the boys under-15 tournament played last week, is also being played at the Coliseo Fernando ‘Rube’ Hernandez in Gurabo, Puerto Rico.

On Sunday, the Bahamas opened up play with a huge 101-20 loss to Puerto Rico, but bounced back on Monday and played much better despite suffering a 79-45 defeat at the hands of the Dominican Republic.

Davis, who was assisted by Shakira Farrington and Anton Francis, said the team, comprising of players as young as 11 years and as old as 14, got a “good experience” and an “eye opener” in the two games played so far. “It’s not easy because the other countries didn’t experience what we did with COVID-19,” Davis said. “Sports is just opening up for us in the country and the little time that we had, we used to get the girls ready for this tournament.

Dominican Republic 79, Bahamas 45: For the 2nd straight game, the Bahamas found themselves in a hole they couldn’t dig out of as they ended up losing again.

Terrell McCoy scored on a lay-up and Dior-Rae Scott added another for a 13-6 deficit. For the rest of the period, the Dominican Republic clamped down on the defensive end, forced a few turnovers that they converted into baskets on the offensive end.

After falling behind 37-9 to start the second quarter, Savannah Turnquest stepped back and canned the Bahamas’ first three-pointer and Scott followed with a lay-up to cut the deficit to 37-14.

The Bahamas got another 5-0 run when Turnquest popped a three-pointer and McCoy got inside for a lay-up for a 47-21 deficit, but the Dominican Republic went on to snatch a comfortable 51-22 advantage at the half.

Coming out of the locker room, Team Bahamas played with a lot more urgency and was only out-scored 17-15 in the period. But in the fourth quarter, the Dominican Republic managed to put the game out of reach with an 11-8 spurt to seal the deal.

Karina Capellan led a balanced scoring attack for the Dominican Republic, who had four players in double figures. Capellan finished with a game high 22 points, eight rebounds and five steals.

For Team Bahamas, Savannah Turnquest paced the way with 11 points. Dawynae Knowles was the only other player in double digits with 10 points to go along with six rebounds. Geontae Simpson contributed eight points with four rebounds and Terrell McCoy chipped in with seven points, seven rebounds, four steals and a blocked shot.

Puerto Rico 101, Bahamas 20: Puerto Rico scored one less point in the first quarter than Team Bahamas did in the entire game as the week-long tournament got underway on Sunday.

In the first half, Puerto Rico opened an impressive 19-3 rout and extended their margin to 49-9 at the half. Puerto Rico continued the onslaught, using an 18-6 spurt in the third for a 67-12 advantage at the end of the third and they closed out the door on the massacre with a 34-5 tear in the fourth.

While Puerto Rico had five players in double figures, led by Desirek Pereira with a game high 23 points, Terrell McCoy was the only player for Team Bahamas in double digits with 12 points and 13 rebounds.

Reyanah Green and Dwaynae Knowles were the only two other players to score a field goal.

Team Bahamas was just 7-for-42 from the field and 6-for-16 from the charity stripe, but committed a total of 57 turnovers, compared to 13 by Puerto Rico.

The other members of Team Bahamas are D’Andra Sears, Andica Curtis and Takeithra Hanna.

Today, Team Bahamas will take on Mexico at 5:15pm in their final round robin game before the playoffs get underway on Wednesday, concluding on Thursday.