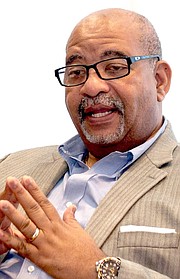 THE Government still has multiple reform options to rescue the National Insurance Board (NIB) from collapse if it acts now, a pensions specialist asserted yesterday, adding: “The sky is not falling in” yet.

Larry Gibson, chief operating officer of CG Atlantic Pensions, and who has long advocated for comprehensive pension and social security reform in The Bahamas, told Tribune Business there are a combination of policy changes that can make saving NIB “less painful” than solely increasing contribution rates for both businesses and workers.

Speaking after the NIB’s 11th actuarial report called for a two percentage point increase in contribution rates to be implemented by next Friday, July 1, with subsequent further hikes enacted every two years until 2036 to secure the social security system’s long-term financial sustainability, he said these reform options include raising the “official” retirement age, increasing the contributions required to become eligible for benefits, and further insurable wage ceiling increases.

The Prime Minister, speaking on his return from the Commonwealth Heads of Government summit in Rwanda, yesterday affirmed his previous stance that the Government will not implement the NIB contribution increase - which would take the overall rate from 9.8 percent to 11.8 percent, split between employer and employee - at this time while his administration explores ways to ease the financial burden this will impose.

He added that the social security system must no longer be “the prime or sole” financier of government projects, or treated as an extension of the Ministry of Housing or Department of Social Services.

“The actuarial report is no surprise whatsoever,” the CG Atlantic Pensions chief told this newspaper. “If you look at the last several of them, they’ve been continually emphasising the same themes and what have you. But there are things you can do: That’s the good news. “You just have to have the wherewithal and the willingness to stop kicking the can down the road and implement them. There are four things you can do, and probably in some combination, so they are not so draconian.... It’s not like today it’s so bad there are no policy prescriptions you can implement. We still have options, but don’t let it deteriorate until we have none.”

Mr Gibson said raising the official retirement age to 65 years-old would “take a lot of the immediate pressure off” by reducing, and slowing, the number of persons eligible to claim pension benefits. He pointed out that 65 years-old is the generally-accepted retirement age worldwide, but at both NIB and government entities it is presently 60 years-old.

NIB was also urged to continue with the inflation-linked increases in the insurable wage ceiling, the latest of which is due to take effect from Friday, July 1, next week. The ceiling is set to rise from $710 per week or $3,077 per month to $740 or $3,207 per month, with these increases scheduled to happen every two years and based on changes in the retail price index plus 2 percent.

Mr Gibson, meanwhile, suggested that NIB “tweak” the number of contributions that an insured must make, or is made on their behalf, to be eligible to receive benefits from 150 to, as an example. Besides reviving NIB’s foreign currency and overseas investments, he also called for NIB’s relatively high administration costs, which equalled 17.6 percent of contribution income in 2017, the last year for which audited financial statements are available, to be reduced further.

“It’s not like the sky is falling in,” he told Tribune Business, despite actuarial projections that NIB’s $1.6bn reserve fund will be totally depleted in just six years’ time by 2028. “There are definite policy prescriptions. We really need to set up for the long-term. What we need is some commitment to work towards them and address it.

“My message is that there are policy prescriptions and it’s going to be a combination of those factors. We need to find a way to somehow decouple these decisions with regard to long-term funding of NIB from the short-day political nuances. It shouldn’t be the prime or only vehicle to fund government projects.

“It’s a strategic investment pool to support NIB’s really core objectives. That’s the social element. It shouldn’t be operating as a Ministry of Social Services or Housing. We need to look at a genuine long-term strategy that is not attached to a government department.”

Mr Gibson, though, voiced concern that there appeared to be a disconnect over NIB policy direction between the Cabinet minister responsible for the social security system, Myles Laroda, and the Prime Minister. The former has previously stated that critical reform can be delayed no longer, but that is exactly what Philip Davis QC said the following day in seemingly contradicting his minister.

“The minister seemed to have a measured and long-term approach,” Mr Gibson said. “I don’t know how that jives with short-term political imperatives. We need to put that [NIB changes] in place now so that by the time of the next election these things are behind us.

“Until we pull our socks up, and sit down in a resolute and mature way and address this, and take the politics out of it... This is a critical juncture for the country, and whether we like it or not it’s going to be reform driven because of successive governments kicking the can down the road.”

Mr Davis, though, reiterated his previous stance on the NIB actuarial report and recommended contribution rate rise upon his return from Rwanda. “Coupled with all of the challenges the Bahamian people were facing at that time, we were not minded to follow the recommendations at that time,” he said, asserting that the report’s contents had been expected and were nothing new when set against previous actuarial studies going back two-three decades.

“We have to find ways and means to soften any increases that are put on the backs of the Bahamian people,” the Prime Minister continued. “I have not seen the latest report, but I am not surprised by it...” He added that any NIB contribution rate rise would have to be balanced with the Government’s efforts to revive the economy and develop new revenue streams for the Public Treasury.

“It’s a recommendation that has been made. It doesn’t come off the table until we decide whether or not to accept that recommendation,” Mr Davis said. “We have not yet done that... If we can find ways and means to alleviate the burden for Bahamians or the Bahamian worker we will do so.”

NIB’s present reality was predicted more than two decades by its seventh actuarial review, completed in 2001, which forecast that “reserves are projected to become exhausted” by 2029 if comprehensive reforms are not implemented to address the fundamental problem of benefit payouts exceeding contribution income. The recipient of that review, which was only one year out, on September 11, 2002, was then-NIB chairman and now-Prime Minister, Philip Davis QC.

Now, with just six years left to the NIB Fund’s total depletion, the magnitude of the correction threatens to be that much more severe for businesses and workers already grappling with surging inflation, COVID recovery, rising gas prices and a potential minimum wage increase.

Mr Gibson, though, highlighted the latest actuarial report’s emphasis on portfolio diversification through targeted foreign currency investments overseas. Many of these were liquidated, with the proceeds repatriated to The Bahamas, to boost the external reserves at COVID-19’s peak when foreign currency inflows via tourism and foreign direct investment had all but collapsed.

“We need more foreign currency investment,” he argued. “It gives us additional liquidity, we can better match long-term assets with long-term liabilities more efficiently. If you look at what has happened with Bahamas government debt, and the ratings on that debt, NIB needs to be the last stop” for financing government borrowing, buildings and other projects in local currency.

“The actuary clearly said we need to do the opposite,” Mr Gibson continued. “They should not be the sole funder of government projects. It’s long-term liquidity, long-term investment and a buffer against currency risk especially in a country where we have exchange controls.”

All National Insurance Fund contributors should now be asking themselves: "Why I am being called on by cruel Davis and the likes of Gibson to continue flushing my money down the toilet in support of a Ponzi scheme destined to near term failure." The music is about to stop and there isn't a chair in sight to sit on!

It's now way too late to prevent the inevitable financial collapse of the National Insurance Fund caused by the gross incompetence and greed of successive corrupt FNM and PLP administrations alike. From its inception the administrative costs of running the National Insurance Fund have been outrageously excessive due to its grossly over-bloated headcount combined with greedy crony consultants of every kind constantly sucking on it, not to mention the heavy toll taken by outright and unchecked fraud.

And of course, the National Insurance Fund's bank accounts will continue to be wrongfully used whenever possible by successive corrupt PLP and FNM administrations as a "go to" cookie jar to make all sorts of wasteful and inappropriate investments with total disregard of the NIB's fiduciary obligations and projected liquidity needs for our aging population.

No matter what the very cruel Davis may now say, he will very soon be seeking to have employers and employees bail-out this defunct Ponzi scheme by way of higher, in fact exorbitant, additional contributions, combined with significantly reduced retirement benefits. But in these extraordinarily difficult times, Davis and Shameless Shane Gibson are gravely mistaken if they foolishly think blood can somehow be had from a stone. The Bahamian people are completely tapped out like they have never been before, thanks in great part to decades of corrupt government activities of the kind Davis and Gibson are very familiar with.