‘MAKE THE DEAL’: Rolle sees plea bargains as way to clear backlogs and protect suspects out on bail 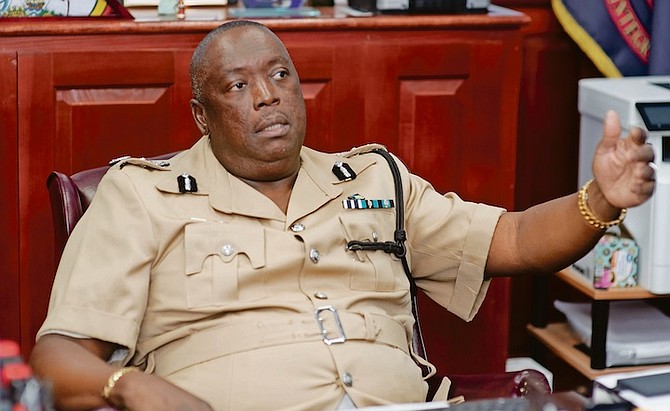 POLICE Commissioner Paul Rolle is a proponent of plea bargaining, pointing to challenges with the judicial system that have created criminal case backlogs, ultimately delaying justice in some cases.

Mr Rolle who is in the waning days of his role as top cop, told The Tribune that this delay has harvested a revenge culture, ultimately making targets of people granted bail.

With the issue looming, Mr Rolle suggested that the force does not get enough credit for the work it does to build successful cases against offenders.

In recent weeks, numerous alleged offenders who have been released on bail have been murdered, igniting discourse about what needs to be done to solve the problem on the issue.

On Monday, the judiciary was told by Prime Minister Philip “Brave” Davis to step up efforts to create speedier trials and Bahamians were urged to stop looking for ways to avoid jury duty.

However, Mr Rolle yesterday said a solution must be found to speed up cases because they are taking too long. He suggested cases be tried within two years, suggesting that to go beyond that timeframe presents implications. These include many factors that will ultimately affect the success of cases when they do come up for trial, he said.

He was asked yesterday to state his position on the escalation of people on bail being murdered in recent weeks. National Security Minister Wayne Munroe has said that around 30 of the men killed this year were out on bail for serious offences.

“I was involved in the investigation for the people in Fox Hill in 2012,” Mr Rolle said. “I investigated that with the four persons in the park. That case hasn’t come up yet and I think one or two of the witnesses they already dead. Some of the parents have already died.”

Apart from witnesses and victims potentially forgetting the details, Mr Rolle said victims and their families may be further traumatized by constantly seeing alleged perpetrators.

“The other part of the equation is the fella is now on bail and the family is seeing him every day and sometimes he taunts them and they know that that’s who killed their loved one and they are angry because they can’t get justice and so we have almost evolved into this phenomenon where people seem to have no interest in the criminal justice system.

“‘You kill my boy well, I gonna kill you’ and we go to the extreme.

“I looked at some of the ways cases are dealt with in the United States,” the outgoing commissioner said. “A lot of their cases are disposed of by plea agreement and plea bargaining.

Asked to further clarify his position, Mr Rolle said: “I am a proponent of plea-bargaining.

“In 2014 when we amended the laws of The Bahamas I was a part of the committee and we increased the penalties so you could get the maximum then for armed robbery for example would be 18 years. We put that to 40 years.

“So, one time ago you had to fight for 18 years. Now a fella gets arrested you say ‘Look you could face 40 years in prison. If you do, I’ll cut a deal with you. Plead guilty and I’ll give you 18 years.’

“You just got 18 what you had to fight for for free.

“The numbers you could play with, but it’s really to get these persons to account for their actions.”

Mr Rolle also said he is of the view that police do not get enough credit for the work that they do to build successful cases to put criminals behind bars.

“From the police perspective I prepare the file for the prosecutors and so the magistrate charges. After he charges I have 14 days and I complete that file along with a complete summary - the VBI files everything and give it to the attorney general so the only thing he does then is prepare that for arraignment at the Supreme Court on whatever date and so we are certainly feeding them.

“All you need to be able to do is give me a date and I’ll make sure that the officers are in court so you do an arraignment today on a case and 10 years later the officers either retired, died or left the force or doesn’t remember because it’s taking too long.

“We have to find a solution to speed up the cases because they are just taking too long. If we can get the cases heard within two years max that’s still fresh because the longer you go, the memory fades and interest fades and let’s say you are a witness in a case you think you will be around five years later, six years later and they call you you won’t remember that. You don’t remember what colour shirt he had on. He got older. He had black hair now he’s gray. They ask if you can point him out and you say, ‘no’ and the case is thrown out.

“So, my thing is the public prosecutor should meet with the attorney because they have status hearing and after the arraignment they have to go back for status hearing and case management and the magistrate may say this is your client that the evidence is strong and advise your client to plead guilty and you and the prosecutor y’all go talk and come back with a solution and come back to me.

“Now because that does not happen these people get bail,” Mr Rolle said.

And yet he talks about how the police don't get credit for their work in building cases against offenders. If the police build such a great case, then how you getting nothing going for the jugular?

We have too many brain dead people in key positions in this country who do not need to be there. And with this one on the way out, the one coming behind him is no better.

That one coming behind is not brain dead. he een gat no brain

The crime horse is already out of the gate.

The only solution is death penalty & hanging.

Our legal minds need to solve that by getting rid of the Privy Council as our last court for ALL criminal matters.

So how exactly would a plea deal with a murderer work? If you plead guilty I'll let you out in 10 years instead of life? I really don't want a murderer out of jail EVER! Seeing that our testicles were removed and we can't kill murderers, then I prefer to go for the jugular and fail rather than plea with these guys so they get out during my lifetime. If we fail in convicting them then street justice will prevail and the murderers will get what's coming to them.

The bottom button on this undisciplined and incompetent fat slob's brown jacket is about to pop off. This oaf can't even sit up straight when making public statements to the news media.

He be one a da many phat katz 😂