Treasure seekers told - leave if you don’t like it 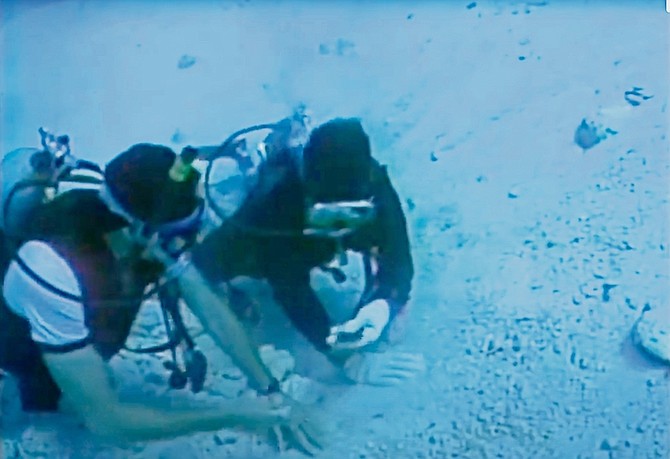 An image from video showing the Allen Exploration treasure hunters at work.

THE Minister of National Security said the company exploring for sunken treasure is welcome to leave The Bahamas if they are not willing to accept the government’s new terms.

Wayne Munroe, speaking to reporters ahead of the weekly cabinet meeting, said that he stands by his earlier comments that any company wishing to do exploration in Bahamian waters should commit to a “process” that would allow for more transparency.

Mr Munroe was responding to comments by Allen Exploration saying that if the government were to flip the existing 75/25 split to one where The Bahamas received the majority share, the company would leave the country as it would not be feasible economically to explore for sunken treasure under that arrangement.

Mr Munroe said: “As a matter of principle, if somebody says something isn’t economic to do, then they won’t do it. The treasure won’t go anywhere and when it becomes economic to be gotten, then somebody will go and get it.”

“But this concept that you can dictate to a sovereign nation is just something that ought not to be countenanced. If you say, for instance, that a service station is unprofitable then you really shouldn’t be in the service station business.

“So, if in fact the truth is then perhaps they need to go somewhere and to look for treasure somewhere where they can do it on their terms.

“Currently they’re doing it in The Bahamas and not anywhere else. So, if that’s the rules the government put in place, you either do business on our terms about our natural resources or you go elsewhere.”

David Concannon, spokesperson for Allen Exploration, responding to Mr Munroe’s comments in an email to the Tribune, said: “The Minister’s most recent comments are unfortunate.  It seems like he is perpetually misinformed.  We have, in fact, had conversations with the Government since the Minister’s last press briefing. I am not at liberty to discuss the particulars, but I can say they are not consistent with what the Minister of National Security said today.”

Mr Munroe would be the first government official to ever suggest that Allen Exploration should leave the country. “In doing so, was he representing The Bahamas or simply himself?” Mr Concannon asked.

Adding that these comments are not the way to encourage private investment and philanthropy in the country, Mr Concannon added: “Mr Allen is not going to leave The Bahamas. He has invested too much of himself and his fortune in The Bahamas to simply leave the country because of impertinent remarks made by an isolated Government official. What he will do, however, is stop searching for and recovering artifacts from underwater. Maybe this is what the Minister of National Security really wants.  Enactment of a system that encourages looting of The Bahamas’ cultural resources, something that creates more bandits to chase but does not serve the interests of the country or its citizens.”

The exploration for the Spanish Galleon, Nuestra Señora de las Maravillas, is heating up as there is an estimated $2bn in sunken treasure in Bahamian waters off Walker’s Cay in Grand Bahama. The treasure belongs to the Bahamian people and not Spain under whose flag the ship sailed.

Allen Exploration was granted a licence to search for this treasure under the former Free National Movement administration headed by Dr Hubert Minnis, but the nature of the licence has changed since initially being granted sometime in 2018. The licence was renewed prior to the 2021 general election under the same legislatively mandated terms and the provisions of the Antiquities Monuments and Museums Corporation (AMMC), but the territory governed by the permit has been significantly reduced.

Allen Exploration still pays the same fees and costs for the licence, including the fees to acquire the licence and the cost of having two Royal Bahamas Defense Force officers on its vessels and one AMMC technician in its conservation facility.

So now that the Bahamian officials know where the treasure is (because of the mandated defense force staff on the boat) we now want to kick the treasure finders out of the country? Seems like some officials will be "finding" some treasure soon.

Precisely … Agreements with the Government apparently mean little … now the Treasure is “found” … we will will take it from here … and you can go elsewhere if you don’t like … but we don’t think you will as you are “too invested” to leave, so you will accept our “new terms” … this is a very, very scary mindset for a Country dependent on Foreign Investment … although Blackbeard would would truly applaud such strategy!

So basically do not trust any agreement with the Government. Strange to do that whilst saying all this travel is to drum up FDI.

the doc made some very bad deals for the Bahamas, OBAN, and a 100-year lease

The doc is and was lacking.

You need to really live in reality.

So the company does all the work and puts in all the expenses, and here come the government mafia operation trying to take all the benefits of the exploration to themselves. Wow!

the Bahamas government is the hospital, the school the roads the prisons all of which need upgrading.

Were the same voices raised when there were all of the canceling examples the straw market the container port and the list goes on the review and cancel government? remember that.D

Billions of dollars worth of gold, silver & other gems lie within our seas. Been there for 400-500 years.

Who is going to get it from off the seafloor?

The treasure belongs to the Bahamian people whether someone else found it or not, it was found in our waters, if we ( the Bahamians ) can't get a beneficial deal towards us, then leave our treasure where it lies. No outsider is supposed to dictate to a sovereign country what they can or can not do with their own things. If some treasure was found or discovered on our individual land whose treasure is it, the individuals or the person who discovered it?

Spain could actually take this to court if they wanted to and claim its theirs.

The outsider had an agreement with our Government and the government is now trying to change it. If we want 75% agree those terms before the outsider starts. Don't change once they find the stuff.

Fully aware of them. They would love to crack open that golden cookie jar.

In effect, whichever Government you deal with, having them renege on any contractual/License agreement is a distinct possibility. Forget FDI by anyone but bottom feeders in that case. Also note, the two Defense force officers are aboard at all times to corroborate any finds and maintain transparency. Monroe appears misinformed, or malfeasant?

FINALLY...... The government has made a sensible decision!!

Foreigners have been getting away with raping and pillaging the Bahamas forever. Now the government needs to amend the cruising and sport fishing permit fees to resemble those of other countries and those who don't like it can go somewhere else too.

If the Bahamas is not profiting fairly from these people, why the hell would we want them here??