FACE TO FACE: The bionic man who wouldn’t be beaten 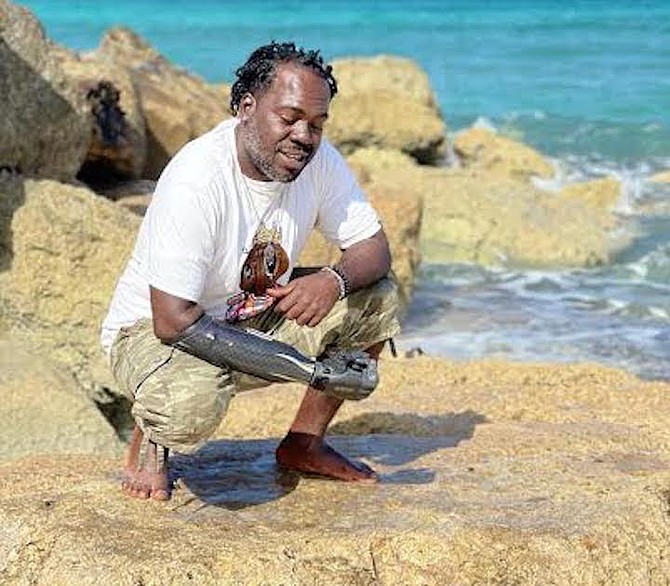 Stephen Cox, the man with the bionic arm.

STEPHEN Cox is a superhero. That’s what seven-year-old Syniah would say about her daddy. He has proven to her that he would do whatever it takes not to let her down – to be there for her and save the day, no matter what comes his way.

But Stephen never knew that his might and will to be his little girl’s superhero would be put to the test on Halloween … of all days … back in 2019. 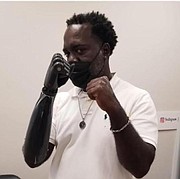 Stephen Cox, the man with the bionic arm.

On that day, an accident on the job proved to be life threatening. His right hand had been crushed and eventually, he lost that hand. Instead of accepting a life with just one useful hand, Stephen fought back and with heroic determination, he set out on a mission to have a bionic arm. Today, he has more than just two working hands. He has a testimony to inspire others; he has the power to touch lives; and he has renewed confidence as a man, a father, and now a motivator for many.

Stephen was born on March 12, 1984. He was just seven-years-old when his mettle would first be tested. He attended EP Roberts Primary and one day, a fight broke out. He was just a spectator, but one of the flying projectiles hit him in the eye. The eye developed a cataract as he grew and eventually, he lost vision in that eye. 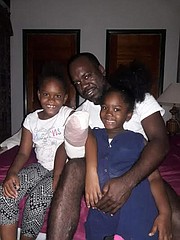 Syniah and her sister are happy Stephen is home from hospital after his ordeal.

He developed the attitude of a champion from early on, deciding not to look at this misfortune as a setback. Rather, he pressed on and attended CH Reeves Senior High, where he graduated in 2000.

“One of my very first jobs was working with my uncle at Sunshine Auto Sales,” Stephen said.

“He (Deanza “Sonny” Cox) taught me a lot about the work field and responsibility and I was always proud to be involved in the annual car show he had created.”

Fast forward to 2019, Stephen was working on the roof of the home he shared with his mother and sister. He had a heat stroke and was taken to hospital by ambulance. The doctors advised him to take it easy to avoid further complications.

“This proved difficult for me because not only was I used to taking care of myself, I had a five-year-old daughter,” he said.

“I confided with a close friend of mine - Lynden Munroe, owner of Triple A Concrete Pumping and Machinery. He saw my frustration and employed me.

“While on the job on October 31, 2019, a slight miscommunication proved to be life threatening. My right hand had been crushed and time was of the essence. I begged a fellow construction worker to take me to the hospital, not waiting for EMS (Emergency Medical Services) as instructed by my peers. At first, he was reluctant because of the blood I was losing, but it also prompted him to help even though his vehicle wasn’t registered for the road. 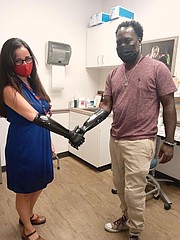 Stephen will work with Liz Uzcategui of the Hanger Foundation to help people in The Bahamas.

“In this time of trauma, the only thing that was on my mind was to have a conversation with God. His grace and mercy kept me through three surgeries. The first was a reconstruction of the hand decided by the head surgeon, who was also surprised that I had been conscious the whole time even though I had lost about three pints of blood. Due to the lack of blood flow, I then had a second surgery removing my finger tips in hopes of saving enough of the hand so that I could have some function. About two weeks later, that was unsuccessful, and the hand had to be amputated at the wrist.”

During his hospital stay, little Syniah was terrified. She wanted to be able to see her father and be held in his big, strong arms.

“When I was in the hospital, I had to coach and encourage her daily,” he recalled.

“That was until she saw me, and then it was like nothing ever happened. She’s just glad that I’m alive.”

While he was in the Intensive Care Unit, Stephen had a feeling the reconstructive surgeries would not work. His conversations with God had left him at peace with all that was happening. He started to research his options for a prosthesis. He did not want a wooden hand, a hook, or some kind of clamp. That is when he discovered the bionic arm, first engineered in the UK, now available in other parts of the world. 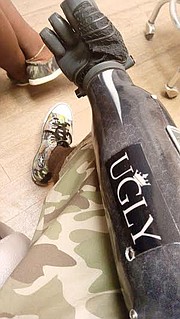 Stephen designed his own bionic arm with a Black Panther skin and the word UGLY, which stands for “U Gatta Love Yaself”.

This would be monumental in terms of healthcare in the country. But Stephen’s doctors knew he had what it took to achieve this goal. He was determined, resolute and the fight in him was so strong he remained awake to watch the first surgery. With this kind of valour, his doctors could not let him down. His surgeon, Dr Shrikan, his hand therapist, Dr Karna and his doctor representing the National Insurance Board, Dr DeSouza all worked together to approve his request, and they wrote to NIB to make the funding possible.

First, Stephen started therapy through the Bahamas Institute for Hand Rehabilitation (BIHAR) and received an industrial injury claim for 40 weeks from NIB. Then he was transferred to disability benefit and started the process for a prosthesis. Eventually, he was on his way to Ft Lauderdale to Hanger Clinic Orthotic and Prosthetic Care to begin the journey of receiving a bionic arm.

“My first trip to Florida was for consultation - to see what type of lifestyle I would like to live with this bionic arm,” he said.

“There’s a technology where they placed sensors on my muscles and connected them to an app on my cell phone, and I would see the hand on the screen. When I moved certain muscles, the censor would react on the screen. Then I did a casting, and I was told to come back for the fitting.

“On the second trip to Florida to Hanger Clinic, they had already made up about 80 percent of the arm with the cast. They inserted the censors and it was fitted on my amputation. I did the same exercises I did before the casting. At this point, I had to use the phone technology in order to do my exercises - opening and closing the hand with the app.

“When I came back for the final product, I was assessed every other day for ten days. I had to live my life and move around as normal (the bionic arm was no longer controlled by the app, but by his mind and muscles). When I checked in with the doctors, I would let them know how my experience was going, living with the bionic arm for the first time, how it affected me, my skin… all of that. After that, they decided I was good to go!”

Stephen shared a few highlights of the trip: “When they put the arm on me for the first time, the doctor left the room. He knew with him gone, I would try some stuff, so he left me to my own devices. I picked up books, bottles… I even moved some chairs around!”

“When I started driving with it, I would only test myself on the straight road because I wasn’t sure how it would react with turns. I was in Walmart’s parking lot practising in an area away from other vehicles. I was practising turning and I didn’t realise the hand would rotate the way it did. I got excited and did so many rotations that the hand popped off on the wheel! I remained calm, put the car in park, and put the arm back on. When I told the doctors, they couldn’t stop laughing.”

“I also had an opportunity to speak with a group of university students during my last trip. I shared my experience and they asked lots of questions.”

“Since I came back, I have learned some new things with my bionic arm. I have been able to adjust the grips when I want to, because it is connected by Bluetooth to my phone. The app assists me with different functions. The possibilities are endless, and I am just tapping into it.

“Syniah loves the bionic arm. I would often tell her I am doing X-men training … so I’m her super hero. She’ll be eight on March 7, just five days before my birthday.”

Stephen will not only make heroic attempts to make his daughter and his entire family proud. He’s also championing the rights of differently abled people, and has made public appearances, giving motivational speeches. He has joined the Disabled Persons Organisation and the Bahamas Alliance for the Blind and Visually Impaired. But he is also working on the establishment of a group of his own – the Able Partners Foundation. He is currently seeking backing and support to create the foundation in order to assist other amputees who would like to experience the world of bionics and prosthetics. For more information, email stephenswanncox@gmail.com. He is also the brand ambassador for Yes! It’s Switcharific - a new, local brand of fruity drinks.

“I’ve come to realize in my experience that people treat you the way you portray yourself, and if you want to have a better chance at inclusion, you must first accept yourself in your current state and realize that everyone doesn’t have the awareness and information to understand what you’re going through,” he explained.

“The world is a tough place - but try not to be so tough on the world because of what is lacking. I always said since I started therapy that whoever said “can’t”, didn’t have to!”

“In terms of prosthesis, I was told by various medical professionals that many people don’t like their prosthetic and find it uncomfortable. I feel the reason for that has to do with its design and limited capabilities. The reason I chose the bionic arm is because of its capabilities and functions. I wanted to get the maximum out of myself and the idea of bionic technology would include me as a person rather than exclude me as a person who is incapable. So, in this modern time, find a prosthesis that’s right for you… that’s if you’re interested in them, and wow the world by your own unique way of making the impossible…possible!”