‘Gas mark ups are not in suppliers’ control’ 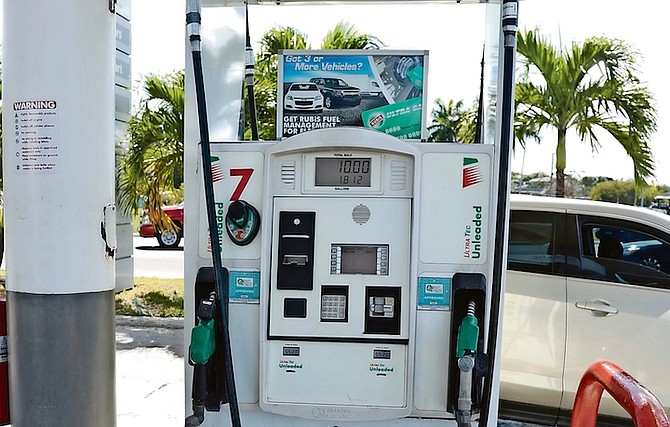 RUBIS Bahamas maintained yesterday that while the fuel industry in the country is regulated by the government, it has no control over the movements in the price of fuel on the international market.

Raymond Samuels, managing director of Rubis Bahamas, in an email response to The Tribune, noted the wholesale and retail margins of fuel are established by the government, adding the wholesale margins have remained the same for over 15 years.

He could not say what the company expects Bahamians to face at the pumps in the weeks to come.

This follows Public Works Minister Alfred Sears’ position that the government would have to consider and take extraordinary measures in response to an expected continued increase in fuel costs.

He was responding on Wednesday to a question from this newspaper about the two-week dramatic rise in fuel costs at the pumps.

In mid-February, Rubis’ price was $5.16 per gallon - below its competitors. But as of yesterday, that price stood at $5.52. This is inclusive of 51 cents in value added tax.

While Shell stations did not increase during that time frame, remaining at $5.37, Esso rose by five cents, increasing from $5.19 to $5.24.

“Fuel like many other commodities in The Bahamas is imported from overseas, and the acquisition cost is a function of supply and demand,” Mr Samuels said when asked if Rubis could say how much at maximum motorists frequenting his company’s fuel stations were expected to pay per gallon of gasoline.

“As such we have no control over the movements in the price of fuel on the international market.

“The price of fuel on the international market is a function of supply and demand. Factors which may contribute to cost increases for gasoline and diesel may include cost of crude oil, refining costs, shipping, and other distribution costs,” Mr Samuels also said.

Mr Samuels was not able to say when prices at the pump would return to normal as currently fuel prices on the international market are “quite volatile”. The war between Russia and Ukraine is likely to impact the price of fuel for some time, he noted.

“As such, using Rubis Ultra fuel will save money for motorists. In addition, motorists may conserve on fuel by planning their trips, carpooling and avoid driving in heavy traffic where possible.”

Asked about the matter Wednesday, Mr Sears said the Bahamian government was no different from administrations around the world regarding the worrisome cost of fuel.

“Every country in the world, other than the countries which have large deposits of oil and natural gas, is concerned,” Mr Sears said in response to a question from The Tribune. “So, the answer is yes, we are concerned.

“Especially (with) the war going on now with the invasion by Russia into Ukraine. Russia is the second largest supplier of oil so again there will be an impact as we have sanctions being applied by a number of countries on Russia. So, like every country in the world, we will have to take extraordinary measures.

“The government has backstopped BPL in the provision of a hedge strategy which stabilises the price or the rate of electricity notwithstanding the fluctuations in the marketplace.

“The Prime Minister yesterday (Tuesday) made an announcement from Belize that the government will take every measure to ensure that the very challenging external environment and rising price of fuel, that certain safeguards will be put in place so that the most vulnerable in the Bahamian society will not have to suffer any more than we have already suffered.”

He also said the government would be making a strong push to decrease the country’s dependency on fossil fuels.

There is NO SHORTAGE of gas oil etc in North America

These fuel companies are ripping us off and blaming Russia

Long time. But the reason they get away with it is because we as a people don’t protest.

The corrupt, incompetent and cruel Davis and Cooper led PLP administration has absolutely no incentive to do anything about the price of a gallon of gasoline. And that's because they enjoy more and more tax revenue coming their way to waste and squander as the price per gallon soars to record heights. Of course, Sir Snake as a PLP 'financial-backer' is also laughing all the way to the bank as the misery index for many Bahamians has never been worse.

We agree for once. And it’s the same scenario within the banking industry. Self-ordained elites are share holders within these organizations so they create any absurd reason to price-gouge Bahamians.

How come the prices in Grand Bahama hasn't risen yet? ummmm

I JUST PUT GAS IN MY CAR 10 MINUTES AGO, THE PUMP WAS SHOWING $4.95, BOTH PUMPS, WAS WONDERING IT THAT WAS RIGHT, BUT MORE THAN LIKELY IT IS. FREEPORT.