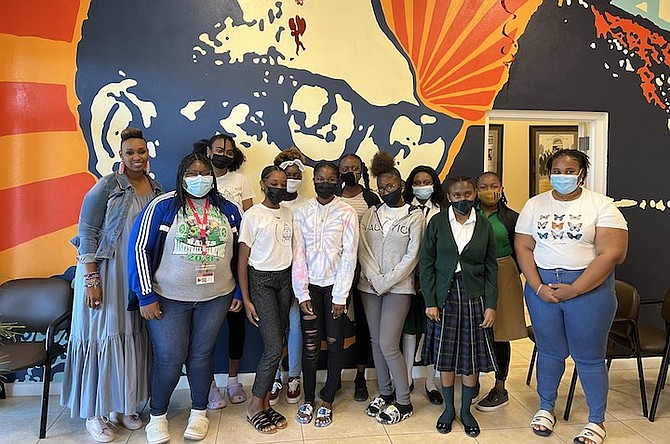 Girls ages 14 to 18 are encouraged to learn about STEM fields.

Girls ages 14 to 18 are encouraged to learn about STEM fields.

FEM STEM Bahamas is one of the local organisations leading the charge in preparing and retaining women in the areas of science, technology engineering and mathematics (STEMS), with the hopes of closing the gap, encouraging diversity, equity and inclusiveness in these important fields.

In the Bahamas, and elsewhere, omen are significantly underrepresented in STEM-related fields. This is the reason why FEM STEM has been introducing these fields to young girls through its after-school programme.

“We have specifically targeted high school girls for two reasons: while girls are outperforming boys in school, there is a significant male to the female disparity in STEM leadership roles. When girls enter high school they tend to lose interest in STEM-related careers. Consequently, we established the organisation to address these challenges,” said Tyrhonda Knowles Glinton, founder of FEM STEM.

The goal of the organisation is to increase the number of female STEM professionals in the Bahamas by empowering girls age 14 to 18 to become innovators in STEM fields, leaders in their communities, and to be independent problem-solvers.

The after-school programme was officially launched in January.

Ms Knowles-Glinton said their mission of is to educate, empower and equip high school girls to pursue opportunities in science, technology, engineering and maths.

“This year, the participants will seek to design and develop an innovative technology solution to address waste management problems for the New Providence landfill. We believe that when young people are actively involved in solving problems they become educated and empowered,” she said.

Currently, there are 20 girls in the programme.

A UNESCO report found that only 35 percent of STEM students in higher education are women.

“Well, there are a number of factors why this gap exists,” said Ms Knowles-Glinton.

“Research indicates that some of the factors include exposure to careers and representation in the STEM field, implicit and explicit bias influenced by pre-existing beliefs about professions, lack of belief in their own capabilities.”

But strides have been made to address these issues.

“Some of these include URCA's Girls in ICT Day event, summer camp programmes organized by Beta Camp and HAP, the Technical Cadet Corps Programme, and FEM STEM Bahamas hosting a series of events and activities that educate, empower, and equip girls to close the gender divide,” she said.

However there is much more she believes can be done.

“I think there should be a national strategy implemented not only to address this gender gap but the skill gap in this country as it relates to STEM. This, however, requires a holistic approach and involvement from stakeholders in the public and private sectors,” said Ms Knowles-Glinton.

“The question often asked, ‘Well, what about the boys?’ My response to that is while this organisation aims to prepare young women to be tomorrow's STEM leaders, we are here to work side by side with our male counterparts, embodying our country's motto of one people united in love and service,” she said.