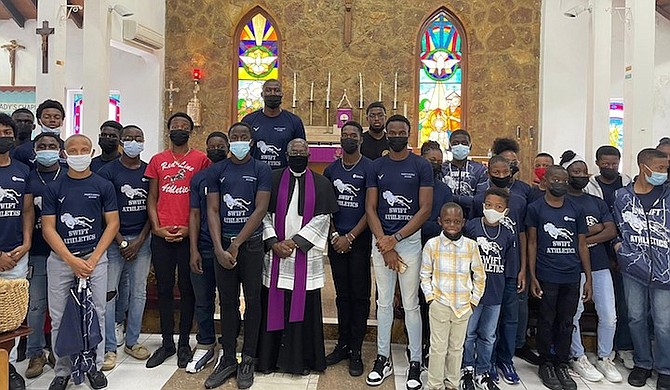 REV Fr Neil G Nairn is flanked by members of Swift Athletics during their church service at Holy Spirit Anglican Church on Sunday.

IN their continued effort to give God thanks before and during the track and field season, the Swift Athletics Track Club returned to church where they worshipped at Holy Spirit on Sunday.

During the service, Rev Fr Neil G Nairn gave his blessing to the team and North American, Central American and Caribbean president Mike Sands provided some inspiring words of encouragement.

A luncheon followed in the parish hall.

With their athletes preparing for the final CARIFTA Trials this weekend at the Thomas A Robinson National Stadium, club president and head coach Andrew Tynes said it was fitting for them to attend another worship service.

“We basically attend church twice a year, at the beginning of the year and close to the CARIFTA trials so the kids could go and get their blessing between the trials and for the rest of the year,” said Tynes, who also stated that with NACAC overseeing the return of the CARIFTA Games in Kingston, Jamaica, over the Easter holiday weekend, it was important to get the boys and girls to share in the activities.

He noted that a few other persons involved in track and field were also invited to attend.

He said he was really pleased that the kids got their blessing from Father Nairn and the words of encouragement from Sands.

Hopefully, based on their performances so far this season, Tynes said he’s looking forward to a number of athletes from Swift Athletics qualifying at the trials or being named to the team for relay duties.

Following the trials on Friday and Saturday, the BAAA is expected to select, ratify and announce the team to represent the Bahamas at the games, which will make its return for the first time since 2019 because of the restrictions imposed around the sporting world with the coronavirus pandemic.