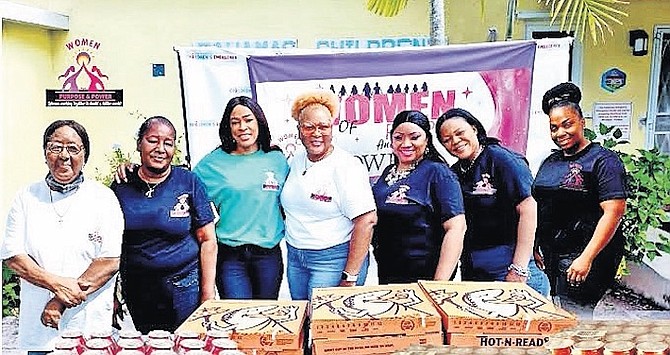 WOMEN of Purpose and Power 242 at the Children’s Emergency Hostel on an outreach ministry mission.

A NEW NGO focused on community outreach and empowerment commemorated its first Women’s History Month by celebrating each other, engaging in community outreach, and making a commitment to foster a culture of “women supporting women”.

Women of Purpose and Power 242 believes women should be celebrated this month because all throughout history, they have been a pillar of strength, often working behind the scenes. They have been masters of grassroots movements, creating change in the world for centuries.

Deidre M Bastian, author and certified life coach, founded Women of Purpose and Power 242 (WOPP242) on July 6, 2021 as a ministry for women ages 24 years and older. Its purpose is to “promote, support, motivate and empower women to achieve their dreams”.

“Life has a way of crowding our calendars, but it’s essential to concentrate on building and strengthening each other,” Ms Bastian said.

“When you help another woman rise, all women rise, and everyone wins. In other words, it’s ok to build other women up as opposed to knocking them down! It may seem like you’re taking attention away from yourself, but what you’re really doing is demonstrating that you’re an inspiring leader who is secure enough in herself to praise others. It has always been my humble belief that we’re always better together than we are alone. In every culture and for every social issue, women are the key agents who have inherently understood the power of networking and support.”

It was through this networking, first with family, then friends, then the wider community, that WOPP242 blossomed into the thriving NGO that it is today. Ms. Bastian’s giving heart and willingness to help others led her to starting her own ministry. When she found like-minded women with hearts that were just as big, they came together, knowing that their strength is in unity.

Today, WOPP242 Ministry has visited churches, children’s homes and communities, spreading love, making donations, and empowering many. What began with a few members in New Providence is now a growing ministry with members in Grand Bahama, the Family Islands, and the United States of America. Each member has, in their own way, been conducting their personal ministries to their churches and community. Therefore, the organisation is strengthened by their presence.

“We all have a role to play in life, how we support and take care of each other; it all starts with our daily conversations and choices,” Ms Bastian said.

“Every one of us has a degree of influence that can be used to benefit someone else, moreover we all do have a choice as to whether we wish to use that influence for the good of others in our community.”

Women of Purpose and Power is extending an invitation for interested women to join a “loving, supportive movement”. Look for them on Facebook or visithttps://www.womenofpurposeandpower242.com/.

Ms Bastian added: “Despite operating as a non-profitable ministry, we are still optimistic and encouraged that WOPP242 will make a giant dent in all areas of our communities, as putting a smile on the faces of children and the elderly in the community is our sole desire. If we can help someone along the way, then our living will not be in vain. By the grace of God we aim to make a difference economically, ethically, and socially.”