‘A republic? That’s up to Bahamians’ 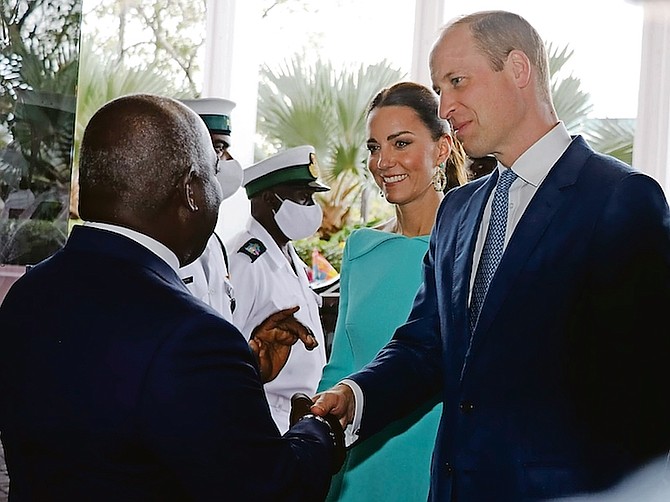 Prime Minister Philip 'Brave' Davis greets Prince William and Kate, the Duke and Duchess of Cambridge, at the Office of the Prime Minister. Photo: Eric Rose/BIS

PRIME Minister Philip “Brave” Davis yesterday said his administration will support discussions about The Bahamas’ future with the monarchy, adding the way forward is for Bahamians to decide.

While defending the Duke and Duchess of Cambridge’s visit to the country last week, Mr Davis said Prince William and his wife Kate’s presence here created an opportunity for The Bahamas to shift how it is seen on the world stage post-Hurricane Dorian and amid the COVID-19 pandemic.

He also told the House of Assembly that final accounting for the trip was not yet complete, adding this attention was welcome insofar as it helps to ensure prudence and transparency in public spending, attributes that were sorely lacking during the previous administration.

“The Royal tour inspired a degree of commentary about the monarchy’s role: in Belize, Jamaica and The Bahamas, in the United Kingdom, and in fact, worldwide,” Mr Davis said. “This was expected, especially in modern democracies such as ours, where the right to freedom of expression remains fundamental and constitutionally protected.

“Our view is that the Duke and Duchess were here as our guests, and as such, we extended the kinds of courtesies we extend to all our visitors.

“They were well aware of the conversations surrounding their visit and the public discussions about the past and future role of the monarchy in our country.

“I wish to briefly draw the House’s attention to the statement issued by the Duke on their return to the UK: ‘Foreign tours are an opportunity to reflect. You learn so much. What is on the minds of Prime Ministers? The hopes and ambitions of school children. The day-to-day challenges faced by families and communities. I know that this tour has brought into even sharper focus questions about the past and the future. In Belize, Jamaica and The Bahamas, that future is for the people to decide upon.’”

Mr Davis continued: “As we move forward in our celebrations of the 50th anniversary of independence, I hope there is lively discussion and debate about our future: about who we are and what we want to be.

“I agree with the Duke when he says that it is for the Bahamian people to decide upon their future. For now, it is enough to say that my administration will listen to, participate in, and fully support those discussions. In time, we can be sure that the will of the Bahamian is always being fully expressed.”

During a special reception at Baha Mar last Friday, Prince William also addressed the discussion in some quarters about more Commonwealth nations possibly severing ties with the monarch. This comes after Barbados became a republic last year.

In defending the Royal duo’s trip to the country, Mr Davis highlighted how the United Kingdom has continued to provide support to this nation. He also noted the benefits their visit brought.

“We are pleased that we are one of only three Caribbean countries being visited as part of the Platinum Jubilee celebrations. This reinforces our wish to project The Bahamas as a leading voice in the region.

“As we approach almost 50 years of sovereignty, the United Kingdom continues to be one of our closest friends and allies. Honourable members may not be aware that, each year when hurricanes threaten us, the United Kingdom continues to provide essential support by following hurricanes with British Navy vessels, to provide vital rescue and relief efforts.

“Also, as one of the G7 countries, the UK is well-placed to support our international position with investors and lenders through guarantees and other measures.

“Following on from the United Kingdom’s departure from the European Union, or ‘Brexit’ as widely known, we note changes in their foreign policy priorities. We want The Bahamas to be at the forefront of consideration of any enhanced trading relationships.

“Discussions are underway about providing more scholarships for Bahamian students and exploring ways to expand the exchange of goods and services between our two countries. We are keen for members of the Bahamian creative and cultural communities to have an opportunity to work in the UK.”

Mr Davis also said over 70 accredited international journalists accompanied the Royal couple and provided global press coverage for each event/activity in which the couple engaged.

Regarding cost, which was a hot button topic of discussions ahead of the royal visit, Mr Davis explained that several factors were to be considered.

“As is so often the case nowadays, much media attention is focused on the issue of cost. This attention is welcome insofar as it helps to ensure prudence and transparency in public spending, attributes that were sorely lacking during the previous administration.

“It has been only four days since the visit ended, we are still awaiting the final accounting. However, some of the more fanciful speculation of cost must be dispensed. So, I wish to immediately place some of the facts about the expenditure underlying the visit on the record of this House.

“As is customary with Royal visits, costs are shared between the Sovereign Grant, the host country, and the UK Foreign, Commonwealth & Development Office. This visit was no exception. In line with this, the Royal Household borne the cost of travel to and from The Bahamas.

“A corporate donor sponsored the Governor-General’s reception. In line with Royal protocol, we are asked not to publicise private sponsorship too much to detract from the event.

“The government of The Bahamas bore accommodation costs for two nights.

“Other third-party costs, such as the cultural events we wish to showcase, were paid to Bahamian artisans and creative and production talent. This was our choice. We wanted to treat our visitors to those displays and stimulate our creative economy, which has been flat-lined in recent years.

“All other costs, such as security, domestic travel, etc, are the internal costs of various government ministries and agencies and, therefore, will not require additional expenditure outside of existing budgets. This is the usual practice adopted by all countries regarding all official visitors,” Mr Davis said.

Imagine being be able to vote for our "president" directly. I doubt Ingraham, Chrisitie, Minnis and Davis would have been elected if that were the case.

Head of state and head of government are two different positions. A theoretical president would just occupy the same role as the governor general, and most likely be appointed by the PM as well.

I highly doubt that the Bahamas will ever move away from FPTP for electing governments; there is no viable third party to justify shifting to MMP or PR, neither federalization to switch to an American type of system.

There's a great piece on John Oliver's Last Week Tonight about this and I agree that we should ditch the royal family its outdated and irrelevant.

This is currently irrelevant. We have much bigger issues that the Bahamas has complete independence to address but isn't. Let's address the bigger issues first.

We need concrete responses to these questions. Any discussions without this are pointless and a distraction.

I agree with you "One" We have been independent for a long time and what have we accomplished ???? We are dependent on many countries for our food, fuel, cars and the list goes on and on! Which country was first to land on Abaco and Freeport after Dorian and We want to become a Republic, why. Be careful what you wish for.

Bahamians will never vote YES to a referendum in this century.

The PLP poisoned that perspective on three occasions. So be it

One question.. whats the point?