A new era for pace 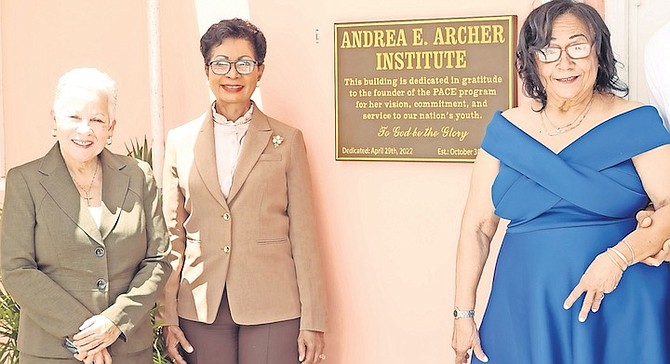 GLENYS HANNA MARTIN, Ann Marie Davis and Andrea E Archer unveil a commemorative plaque at a ceremony to mark the renaming of the PACE building as the Andrea Archer Institute.

PROVIDING Access to Continued Education has renamed its East and Plantol Streets building as the Andrea Archer Institute, in honour of its founder.

During her remarks, Mrs Hanna Martin called Mrs Archer a hero. “I personally think Mrs Archer is a hero and I want to say that I am so proud to know you, I am proud of you as a Bahamian woman, I am in awe of your courage... you had to fight against the status quo,” the Englerston MP said.

Mrs Archer said the road to establishing PACE was not easy, noting it took “courage, stamina and fortitude” in the face of negative criticism and vilification.

The PACE programme is a special school for teenage mothers unable to complete school due to their pregnancy. The school was founded in 1969 by Mrs Archer.