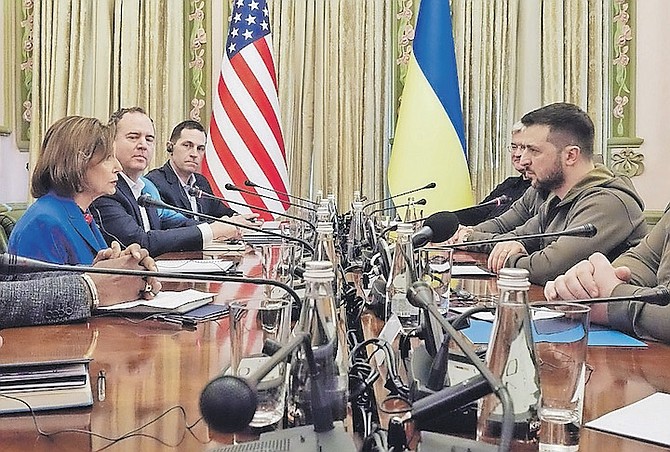 Ukrainian President Volodymyr Zelenskyy and US Speaker of the House Nancy Pelosi meeting in Kyiv, Ukraine, on Saturday - but unity across Europe in support of Ukraine has been patchy.

ONE interesting aspect of the terrible war in Ukraine that has gradually emerged is the failure of the European Union as an institution to play a significant role in equipping that beleaguered country to resist Russia’s prolonged aggression. With the war now into a third month, this is worth examining.

While the EU may have used its collective weight to press its member states to punish President Putin with financial sanctions and has imposed a no-fly zone for all Russian aircraft, it has been for individual member states acting primarily on their own initiative to supply aid and assistance in the shape of weapons and other military equipment together with receiving refugees – and the star of the show has been Poland. Likewise, former EU member, Britain, has played an important role – including a visit to Kyiv by Prime Minister Boris Johnson - as recognised by a headline in the UK press over the weekend saying “Brexit Britain leading power in Europe as Boris spearheads West’s fight against Putin”. Amongst other countries, the US has, of course, also contributed strongly, not least with President Biden’s most recent additional commitment with a request to Congress for $33bn worth of weapons and military equipment.

It is generally agreed that among EU countries Poland has taken a leading role in confronting Putin. To some, this is ironic after the country’s ongoing row with Brussels in recent months over differing interpretations of sovereignty that resulted in the European Court of Justice ruling in favour of denying Warsaw access to certain EU funding – and this is now seen as ill-judged. The country has become the lynchpin of Western efforts to provide weaponry and other support, including the offer of used MIG fighters which was turned down by NATO for being too provocative.  Poland has also, of course, taken in millions of Ukrainian refugees; and many consider that the effectiveness of this military and humanitarian assistance led to Russia’s decision to cut off gas supplies to the country, as well as to Bulgaria.

As for Britain, having already sent its own military equipment and supplies, it has also provided a much-needed sense of direction within the NATO alliance, and it now seems to be toughening up its response even further. Foreign Secretary, Liz Truss, said last week that Western powers should now provide warplanes and heavy armour because Putin’s aggression was posing a threat to the wider security of Europe – “If Putin succeeds, there will be untold further misery across Europe and terrible consequences across the globe”.

The lack of EU unity has been criticised by former European Council President, Donald Tusk, who slammed member states like Germany, Hungary and Italy for blocking tougher sanctions while, separately, France has been accused of appeasement over President Macron’s frequent contacts with Putin which some have said were aimed at giving him diplomatic cover for the invasion rather than having any chance of securing an end to hostilities. Tusk said that for him the leitmotif or essential theme for the EU was unity. But the Russian invasion, which had created the most acute crisis in Europe since the Second World War, had revealed deep divisions amongst the bloc’s political elite.

However, while Germany was originally against an embargo on Russian energy, it now appears to be taking a more positive stance generally following its new Chancellor’s announcement of a dramatic rise in the nation’s defence spending and an eventual decision to send weapons to Ukraine after at first declining to do so for fear of provoking Putin.

The EU has a limited collective identity. It is not a state and has no central governing role. As it seeks to move towards a common foreign policy through ever closer political union, traditionally it has adopted a cautious approach to foreign affairs while lacking an effective system to resolve issues in the international arena.

This is quite different, of course, from NATO. Founded in 1949, this organisation is an intergovernmental military alliance between 30 member states, of which 28 are in Europe and the other two are the US and Canada while 3 are nuclear weapons states: the US, the UK and France. With its US military dominance, it provides a defence umbrella for the EU in response to Putin’s aggression that has presented a clear and present danger to the collective security of its member states.

NATO’s role remains crucial, but an important separate development last week was the gathering at an American air base in Germany of a US-led coalition of Western allies to discuss how to help Ukraine to defeat Russia’s forces. Named the Contact Group, this was the first of regular monthly meetings of more than 40 partner countries including NATO – and others like Australia and South Korea – together with Ukraine’s defence minister. The US has said it would be “a vehicle for nations of goodwill to intensify our efforts… and coordinate our assistance”.

It also shows, perhaps, a hardening of the West’s resolve to stand up to Russia and to try to weaken it in response to the growing danger of the war spreading to neighbouring countries. Putin’s public threat of nuclear confrontation remains despite US Defense Secretary Lloyd Austin’s recent comment that “nobody wants to see a nuclear war. Nobody can win it” – and it is clear that tensions between Russia and the US and its allies have soared to their highest levels since the 1962 Cuban missile crisis.

Western history and values under attack

In talking about his new book “The War on the West: How to Prevail in the Age of Unreason”, Douglas Murray, the controversial bestselling British author and political commentator, explains its focus on the explosion in recent years of anti-Western sentiment across the world as faith in its history, traditions and culture has come under relentless attack. Published in April, this important book is described by critics as brilliant and provocative and an invaluable guide to understanding the concerted assault on those traditions and history that has gathered pace in recent years.

The Wall Street Journal has called Douglas Murray one of the most effective and widely-heard voices in the struggle against the seemingly inexorable march of progressive ideology through the culture, institutions and politics of the great Western democracies which is said to be undermining their cohesion and purpose.

As part of earlier commentary about the Enlightenment – the intellectual movement of the 17th and 18th centuries – Murray has spoken of some of the then greatest advances in human history providing, among other things, the philosophical basis for the principles of toleration and reason which, he says, are the foundation of the aspiration to build societies fit for all human beings to live in.

In his book the “The Strange Death of Europe” in 2017, he examined the apparently voluntary collapse of the old continent’s moral and “civilizational” identity in face of mass immigration – and, in his work “The Madness of Crowds”, published in 2019, he described the destructive potential of identity politics that has come to dominate public discourse. Now, in his latest book, he examines what has been called one of the most remarkable phenomena in modern history; namely, the apparent ambition to denigrate – and even destroy -- everything that has successfully created Western civilisation, a threat that is all the more remarkable because it is coming from within. Murray calls it a cultural war which is being waged remorselessly against all the roots of Western tradition and against everything good that this tradition has produced – the things that most people were brought up to believe were positive about their country, themselves and their past.

It is fascinating and revealing to listen to the author talking about Britain’s history, achievements and heroes being at the centre of people’s feelings of national pride, and he acknowledges the bad as well as the good. But he suggests that history is now being looked at purely, and almost simplistically, through the lens of racism, slavery and colonialism with an emphasis on diversity, inclusion and equity – and he says, in harsh terms, that dogma is the enemy of democracy and the “harbinger of mob rule”.

These are, of course, issues of the utmost importance, but the scope of history is even broader. This raises questions about historical revisionism as the reinterpretation of an historical account of something. It is legitimate to challenge orthodox views in light of the discovery of new facts and evidence. But, it is argued, wholesale denigration and condemnation of established history can surely only be justified on the basis of rational argument -- rather than on the extreme views of minority groups -- and after taking into account as well the different values, conditions of life and standards of the past. Thus, many believe that each new generation should learn from the mistakes of history rather than seek to condemn it since it obviously cannot be changed.

It would not be appropriate to opine further here on these important issues. But, whatever one’s views about them, Douglas Murray’s latest book is clearly challenging and provocative – and it promises to be a most interesting read.

Busy month of May in wartime

It would be invidious to suggest that any particular month of the year in history is more significant than any other because, of course, important events are taking place all the time. But, with May now upon us, it is interesting to reflect on several happenings in this month during the Second World War.

On May 10, 1940, Winston Churchill took over as Britain’s wartime leader from Neville Chamberlain whose position as British Prime Minister was no longer tenable after his earlier policy of appeasement had failed. He had shown himself to be ill-equipped to save Britain from conquest by Nazi Germany and resigned after losing a confidence vote in the House of Commons.

Five years later, the war in Europe formally ended and victory was celebrated on VE Day on May 8, 1945. This was after Hitler had committed suicide on April 30 and Germany had surrendered unconditionally on May 7. The history books say that all combat actions were ceased at the end of the day on May 8. But, with the time difference, this was May 9 in the former Soviet Union which therefore celebrated its Victory Day on that date to mark its own triumph over Nazi Germany.

In today’s Russia, Victory Day is an important public holiday typically celebrated with military parades, festivals and fireworks across the country – and, according to some, Putin uses it to glorify himself as well as Russia as a whole. Now, it has taken on a special significance because of the war in Ukraine. There is speculation that Putin might use Victory Day this year to announce an extension of the war to other countries – and he might also declare a general mobilisation of the Russian population while renewing his threats of nuclear war against the West. So, as the horrors of this war continue to unfold, all eyes will be on Moscow on May 9.

Biden has sent $1billion in military aid to Ukraine. Thus no negotiation will happen until the last Ukrainian is dead or we have WWW3

I think it's more like $33 billion of US aid to Ukraine and it is just a start. This is more than half of the Russian budget for defense. Ukraine is being sacrificed in this US proxy war against Russia. And yes they are willing to risk WWIII to achieve their goal.