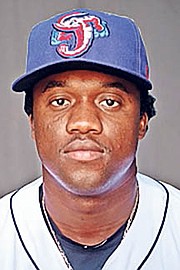 ANFERNEE Seymour has emerged as leader for the Charleston Dirty Birds in his debut season with the club and is among the team leaders in several offensive categories.

Through 10 games, the veteran outfielder leads the Dirty Birds with five stolen bases, hits (14), doubles (three) and is second on the team in runs scored (nine).

After a fast start at 4-0, Charleston is currently third in the Atlantic Professional Baseball League’s South Division at 7-5. The Gastonia Honey Hunters lead the division and the league at 10-1 while the Southern Maryland Blue Crabs lead the North Division at 9-1.

Seymour opened his 2022 season on a high note with a solo home run in his Dirty Birds debut.

When he signed with the club last offseason, Dirty Birds manager Billy Horn touted the presence he expected the former Miami Marlins prospect to bring to the clubhouse.

“Seymour brings an explosive dynamic to our ball club,” he said. “I am looking forward to seeing him set the tone at the top of the lineup for us this year”

The Atlantic League of Professional Baseball (ALPB) is considered one of the most successful and highest levels of baseball among independent leagues. It is an official MLB Partner League based in the Mid- Atlantic and Southeastern United States.

Seymour spent last season with the Kane County Cougars of the American Association of Professional Baseball.

At the Major League Baseball level, Seymour last appeared as a member of the Miami Marlins organisation with the Jacksonville Jumbo Shrimp of the Double-A Southern League.

In 2019 Hurricane Dorian forced a premature end to the Southern League season. Seymour finished the season just nine hits shy of 500 for his minor league career. Following the season, he opted for free agency. He was originally drafted by the Marlins in 2014 and spent two years in the organisation before he was traded to the Braves in 2016 and returned to the Marlins for a second stint in 2018.