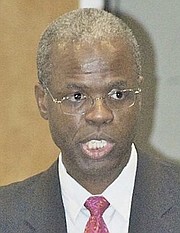 The Government accounted for 59 percent of the 2022 first quarter’s $523m rise in The Bahamas’ foreign currency reserves, the Central Bank’s governor has revealed, although the banking sector subsequently took on the greater share.

John Rolle, replying to Tribune Business questions, said the Government sold a net $310m in foreign currency to the Central Bank during the three months to end-March 2022, likely representing the proceeds from its foreign currency borrowings. The $212m-$213m balance came from purchases from the commercial banking sector.

“Commercial banks made a net sale of $212m to the Central Bank during the first quarter of 2022,” Mr Rolle disclosed. “In the same period there was a net sale to the Central Bank from the public sector, mostly government, of $310m. By the end of April, the cumulative net sale from banks would have increased further, while the net contribution from government would have been less owing to net use of foreign exchange for foreign currency debt service payments.”

Mr Rolle announced on Monday that the Central Bank was raising its year-end forecast for The Bahamas’ external reserves holdings after they started May above $3bn following the $523m expansion during the first three months of 2022. He added that the monetary policy regulator now expected the foreign currency reserves - which are key to supporting The Bahamas’ fixed one:one exchange rate peg with the US dollar - to close 2022 ahead of year before levels.

The external reserves closed 2021 at $2.459bn, and Mr Rolle said the 2022 first quarter increase had been driven by a combination of the Central Bank’s net foreign currency purchases from the commercial banks and the proceeds of government borrowings.

“In the first quarter, the seasonal pattern of private sector net contribution to gains in the Central Bank’s external reserves was also re-established, as commercial banks made a net sizable sale of foreign exchange to the Central Bank,” the governor explained. “This, added to proceeds from the Government’s foreign currency borrowing, boosted the reserves by $523m over the quarter.

“Taking net private sector receipts for April into account, the reserves as of the beginning of May were just above $3bn. The Central Bank expects further seasonal accumulation in the external reserves over the remainder of the peak tourism months, before some reduction sets in over the second half of 2022.

“Nevertheless, we believe that conditions have improved enough such that, by the end of 2022, some net gains will remain in the reserves compared to the end of 2021. This is an upward revision to the forecast for the reserves.... The strength of the reserves and improved tourism outlook continue to support a more accommodating monetary policy position for credit expansion.”

Meanwhile, one of the “headwinds” facing the Bahamian economy came into sharper focus yesterday as the US Federal Reserve - in a move that was widely expected - implemented the sharpest short-term interest rate hike since 2020 with a 0.5 percentage point increase to a target range between 0.75 percent and 1 percent. The move, which was widely expected as part of efforts to dampen inflation, is projected to be the first of many this year with another forecast for June.

Hubert Edwards, head of the Organisation for Responsible Governance’s (ORG) economic development committee, yesterday told Tribune Business that The Bahamas “must make every single policy action count” as it faces “a complex multiplicity of issues” that lie beyond its control and will take some time to resolve.

While predicting that the Federal Reserve’s action will not impact pent-up tourism demand “in a hugely significant way”, he added that the most obvious near-term impact would be to raise borrowing (interest) costs on The Bahamas’ existing and any future foreign currency bond issues.

“From our perspective, it’s really about the impact it has on the cost of borrowing in foreign currency,” Mr Edwards said. “Inevitably, to the extent we have any variable loans out there, the price is going to increase. As the Government looks to reorganise the current portfolio, and maybe go back to the market for roll-over debt, it’s likely - regardless of how well they organise it or how improved the performance is - there will be an additional cost to reinvest, particularly in the near-term.”

As a result, Mr Edwards said it was important that the Government shift back to sourcing more of its financing needs locally in domestic currency or Bahamian dollars to reduce the exposure to US interest rate hikes. Mr Rolle on Monday said there was now more scope for it to do just that given that the external reserves are presently above $3bn.

“Right now we’re in a place where there’s a complex multiplicity of issues, and it will take a while for them to fall away,” Mr Edwards said, pointing to the Russian invasion of Ukraine and the western world’s fight against inflation. “It’s not necessarily that the country is over a cliff but it calls for a different mindset in managing our affairs, and a mindset that calls for us to make fundamental changes to fix things for the long-term.”