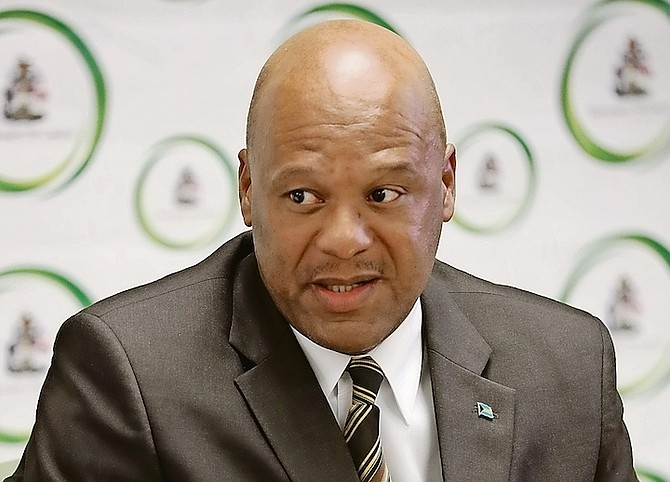 LABOUR and Immigration Minister Keith Bell says he’s expected to have a report on the proposed liveable wage by Monday.

The minister was asked yesterday to provide insight regarding when legislation for the new working wage would be brought to Parliament.

Mr Bell said: “Well, I cannot say that because obviously it is determined by Cabinet, but I can say that I should be in possession of the report from the Department of Labour on Monday, which will direct the National Tripartite Council, which will guide the Cabinet of The Bahamas in terms of where we ought to go.

“Then there will be widespread dialogue and consultation with both the private and the public sector.”

He said the report would indicate where the needle ought to go in terms of the liveable wage and the eradication of a minimum wage.

Last week, Mr Bell said he expects legislation to introduce a liveable wage in The Bahamas to be presented to the public this year.

On March 14, Mr Bell said his ministry expected to receive recommendations from the National Tripartite Council on an increase in the minimum wage within two weeks. That deadline has long since passed.

Last month, council chairman Robert Farquharson told The Tribune the report is in its final stages and will be presented to the government soon. Deputy chairman Peter Goudie, however, appeared to differ, saying in a separate interview that the council wants to do more research before presenting their recommendations.

Mr Bell said at the time: “In respect to the minimum wage, as you would know in our Blueprint for Change we indicated that we would have eliminated the minimum wage and introduced a liveable wage. I am pleased to report that the Department of Labour, the National Tripartite Council, they’re just about completed with their report and from all indications I could say everything looks promising.

“As the matter has to go before the Cabinet, I am unable to say what it is, but I think that all of us in the Bahamian society will be very proud of what the council has been able to achieve.

“Of course, once it goes to Cabinet there will be widespread dialogue and consultation to make sure that we speak with our employers, certainly we’ll speak with the employers and the wider Bahamian community.

“The final stage will be for legislation to be introduced. I anticipate that we will be seeing it sometime during this year.

“We’re gonna run a very aggressive campaign and, of course, we want to make sure that we dot our I’s and cross our T’s, to make sure that we get it right. When I travelled recently to Barbados, a number of the ministers from the other areas of the region, they were very interested to see what we would do in The Bahamas so it is important that we get it right because the entire Caribbean is watching.”

Mr Bell does not believe the liveable wage will have to be phased in.

Lol... if Bahamians think that they will raise minimum wage to a livable wage, then they are plumb crazy. The most they may do is raise it to $300 a week, and even that may be a stretch. Honestly a liveable wage is this country is at least $400 a week, and that's scraping by. And with a significant increase there may come the question of qualified workers. No longer will employers be satisfied with employees who barely graduated high school and have no other qualifications, they may require some qualifications to go with a major minimum wage increase. So all of that needs to factor in...

The problem with a minimum wage is it excludes those without the skills to earn it. Raise Minimum wage and exclude/marginalize more people. A harsh reality. Our country has far too many unemployables.

This idiot and his obsession with ‘livable wage’ will def cost him his seat and the PLP the government. Wage earnings should be a product of productivity first to f all these msg. The ability of a worker to survive or not be able to live in an economy is more than his earnings. Slavery, for example, was predicated on the idea that we ‘we cannot afford to pay the workers what they need to survive in a normal economy, so we will create a controlled economy for them to live in.’ And government controls a lot of what contributes to the cost of living. In a free society, after a minimum wage, it is up to a worker to improve his skills, education or work experience in order to earn more income. They f government forces more labor on the economy than it can bear, this will lead to inflation, unemployment and businesses closing down. Idiots like Keith Bell need to study and do research before they try to deliver to the workers the impossible and cause a complete collapse of the economy veith his ignorance.

Waste of money and a waste of time. Whom can afford to pay minimum wage of $500 per week?

I can see a cost of living increase which has been needed for a few years now, but this report will also help in pushing the cart that way.

What a jackass! The only people who could expect a livable wage in dees times is da set who riding da gubment gravy train.