Pinder: We will lead on climate change 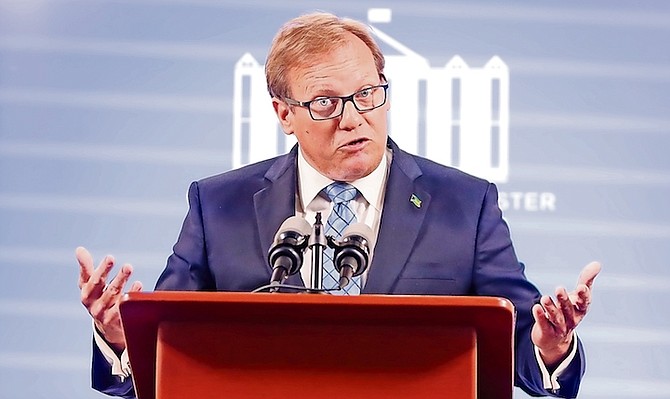 THE Bahamas will continue to play an active and powerful role in the fight against climate change, Attorney General Ryan Pinder said yesterday, adding the country’s voice is “being heard more frequently and with more impact than ever before.”

His comments came as senators debated and passed the Climate Change and Carbon Market Initiatives Bill 2022 and a compendium of other bills yesterday.

“Our administration has not been content to sit on the global sidelines, leaving our fate in the hands of others,” Senator Pinder said yesterday. “Our New Day government will continue to make the case for urgent action. The world is noticing. The Bahamian people are more engaged around issues of climate change than ever before. And the voice of The Bahamas is now being heard more frequently and with more impact than ever before.

“As the world moves forward to address the causes of climate change, we intend to play an active and powerful role in charting the way forward. The Climate Change and Carbon Markets Initiatives Bill, 2022 is clear evidence of this distinct policy.”

The Bill seeks to give effect to the Paris Agreement to aid in the global response to the threat of climate change and to create and implement initiatives to offset carbon emissions.

Through this framework, the government will be able to create incentives and implement initiatives to support the overall global target of greenhouse gas emissions reduction consistent with its nationally determined contributions.

It will also ensure compliance by The Bahamas of its obligations under the Paris Agreement taking into consideration the common, but differentiated responsibilities, respective capabilities and flexibility provisions acknowledged under the United Nations Framework Convention on Climate Change for small island developing states to address climate change; and to enable the establishment of a market in The Bahamas to trade in carbon credits.

Further to that, the Bill will create shared ministerial responsibility between the prime minister/minister of finance and the minister responsible for the environment and natural resources; the appointment of a management company, and the appointment and functions of an advisory council, which will have responsibility for serving as a technical advisory body to a management company.

Yesterday, Mr Pinder said the bill is in keeping with the government’s commitment to better manage its natural resources for the benefit of the Bahamian people.

He also said Bahamians should be proud of the new piece of legislation, which he insisted was “trail blazing internationally.”

He continued: “The sale of carbon credits can aid the country in further protecting and benefiting from its seagrasses, mangroves, forests, and coral reefs. Moreover, many businesses and multinational companies have been directed by their shareholders to engage in stronger environmental, social, and governance (ESG) practices. Therefore, the provision of Bahamian carbon credits would prove of mutual benefit for the country and these private sector entities. The vision by the Prime Minister has come to fruition in the Climate Change and Carbon Markets Initiatives Bill, 2022.”

Other bills debated and passed yesterday included amendments to the Magistrates Act, Criminal Procedure Code Act and Evidence Act as well as the Juries Act.

The compendium of court bills is designed to modernise and refine the law to help advance and improve the administration of justice.

The new amendment to the Juries Bill removes the requirement for the jury list to be published in newspapers along with the chosen individual’s respective addresses.

Meanwhile, the Evidence Amendment Bill allows for a better framework for remote court hearing and the Criminal Procedure Code Amendment Bill would also allow the accused and vulnerable witnesses to give evidence virtually.

As for the Magistrates Amendment Bill, this increases the financial thresholds of jurisdiction of the Magistrate’s Court in certain matters.

According to Mr Pinder, other initiatives underway include the implementation of an integrated court system and the establishment of a remote court system throughout the country, the latter of which will allow for remote hearings and eliminate the need for magistrates to travel to the islands to conduct circuit hearings.

Ya got dat right!

Did this buffoon mistakenly get jabs of the ESG brain-wash vaccine along with his jabs of the COVID mRNA vaccine?

New LNG plants and cruise ships back to pre pandemic levels is leading? I guess maybe if we burn all the fossil fuels there will none left to burn as means to solving the problem?

Naive is polite for these statements.

... one would think that over multiple geological periods the earths climate has never changed. Most don't even know we are in an inter-glacial period right now, but let these crusaders continue their efforts to change the climate!

Lead on climate change!!! Jokes for days LOL! You can't even get people to put their garbage in the trash instead of the side of the road.