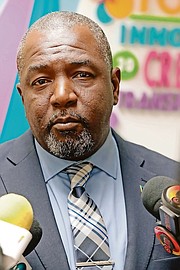 YOUTH, Sports and Culture Minister Mario Bowleg said as long as COVID-19 cases remain low in the country he is of the opinion that planned cultural events will go on as scheduled.

In recent weeks, there has been a slight increase in virus cases.

This has manifested itself in the last epidemiological week, with Dr Nikkiah Forbes, National HIV/AIDS and Infectious Disease Programme director telling The Tribune on Sunday that 65 percent of the cases were locally transmitted.

While on May 8, the Ministry of Health and Wellness said there were 16 new confirmed cases, May 7 saw 37 new cases.

Asked if there was concern that the increase of COVID-19 cases could hinder his ministry’s plans, Mr Bowleg answered: “No, I don’t think so. The most recent report that came out we had about 17 cases I think last week. I haven’t seen any reports since then, but I’m not too much concerned.

“I think the Bahamian people within itself have done a great job of safeguarding themselves and their families and have been adhering to the protocols and if we continue to do that and, of course, we continue to encourage those who need to be vaccinated to go ahead and get vaccinated. I think if we keep that down below 20-25 that is a little bit high one from what we’ve been seeing in the past few months, but I believe that it will continue to be reduced and I think the cultural events will continue to go on.

“I believe Bahamians, they don’t want to see us go back to the days of being locked down. We’re paying attention to what’s happening as a Bahamian people, as a people. So, I could see us moving forward with all cultural events we had planned.”

This comes as officials last week confirmed that Survival Weekend will return on May 20-22, with a road parade set to take place on May 21. Rafel Dean of the Band Owners Association has said all safety protocols will be followed and enforced by the Band Owners Association as well as individual bands that will be participating to ensure the “maximum safety of all in attendance”.

The minister was asked if he had concerns about this event resulting in an outbreak or spike of COVID-19.

However, he pointed to the protocols in place.

He explained: “I wouldn’t say there’s no concern, but I think that there was protocols that I’ve been made to understand that were put in place by the medical professions and also two that supposed to be almost like parade drive-by. There shouldn’t be anyone on the streets. There should be people on the trucks, I was made to understand, and in vehicles.”

“So, it shouldn’t be the norm that we’re used to seeing. So, again if they adhere to the protocols, if they’re going to be on the parade or on the truck, then they should have a mask on or I think they need to be vaccinated or have an antigen negative test prior to going on the trucks. I can’t tell you the facts of the protocols, but I know there are some in place. So, to say that that will be cancelled, it’s too early to see. We got another 14 days, I think, before that event. So let’s watch the cases as they come by. But I assure you the medical professions will make a decision that will be more beneficial to the Bahamian people.”

“That’s not off the table unless advised by the medical professionals - Junkanoo is a go. If we see there’s a spike, we will make a decision that is beneficial to the Bahamian people and if it means cancellation then we will do that at that point in time, but again we are just in the month of May.

“We gotta another 60-days prior to or a little less for independence and so I believe everything within its time. We don’t want to make quick decisions, but we want to continue to monitor the situation and make the right decisions.”

Does anyone know how many thousands of children have died of Covid since schools went back face to face? I don't. Why is this information being kept secret?

If this #(information) was known publicly, people would be demanding their 6th shot! Who would pay for it?

The spectacle of our vulnerability to the covid seems to manifest itself always prior to normalcy. Now bug name Gates has Covid as if a reminder that his vaccine and booster does not stop you spreading and getting sick and life should go on. Sad for the covid profiteers as their armies of media blitzing of world wide fear mongering is busy fighting elsewhere. Or we would be back in 2021 shocked at the feet in quicksand by covid.

"Many recognizable examples of mass formation. Here is one: accept novel genetic product with no long-term safety assurances to prevent an infection every six months, get the infection, and continue taking the same product, get infection again. No questions, no stopping point." Dr. Robert Malone