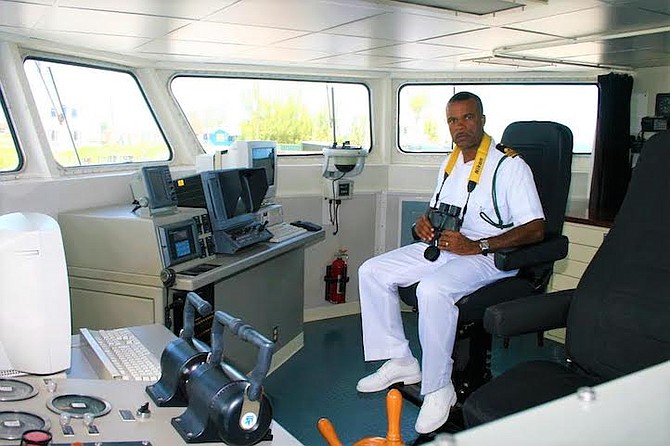 COMMODORE BETHEL – sailor of the seas and documenter of history. 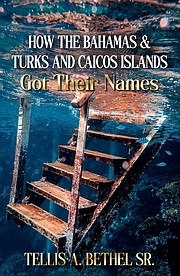 The beautiful waters of the Bahamas are a treasure trove of natural resources that could become a symbol for world peace, paying homage to a rich past and guiding the way toward a bright future. According to former Commander of the Defence Force Commodore Tellis Bethel (retired), the waters of The Bahamas should be named “the Lucayan Sea”, and should be promoted as a symbol of world peace. His vision for the Bahamas would create not only a better country, but a better world.

The Bahamas (an independent country) and Turks and Caicos Islands (a British Overseas Territory) belong to the same chain of islands. The 700-mile long island chain covers an expanse of a sea that touches within 90 miles of Miami, Florida to the north and within the same distance of Haiti and the Dominican Republic to the south.

“The names of The Bahamas and Turks and Caicos Islands are rooted in prehistoric events brought to the Old World of Europe’s attention after Christopher Columbus’ first landfall on an island in The Bahamas as his introduction to the Americas in 1492,” Commodore Bethel explained.

COMMODORE Tellis A Bethel and his wife, author and publisher Teri Bethel.

“He was met warmly by the non-violent local Lucayans. Sadly, like in the rest of the New World, genocide was quick to follow as Europeans spread their might into the hemisphere.”

“A key part of these islands’ storied history is the interactions of the indigenous Lucayan people, Spanish treasure ships, rival European powers, the language of Spanish colonists, and infamous pirates that converged, often in a forceful clash, culminating in the names of the two countries today.”

The Bahamas has been a recreational playground for boaters, tourists, celebrities and others for centuries… but it has so much more to offer. According to Commodore Bethel, this country stands to become a global influencer as the “Peace Capital of the Americas”. Despite current social challenges, he believes that the people and the land possess the authentic personality, skill sets, and natural beauty to attract world bodies and international agencies to converge on this pristine archipelago and come together to resolve critical issues that will foster world peace.

“Ever since resettling these islands, Bahamians have made relatively peaceful transitions from colonialism, slavery, and racism to internal self-governance and independence. Furthermore, these islands are blessed with peaceful settings of sun, sand, and sea,” Commodore Bethel said. “Our people are traditionally friendly and have risen to become regional leaders in hospitality who specialise in giving our visitors the VIP treatment. Need we say more?”

A real son of the sea, Commodore Bethel has spent most of his life traversing, protecting and admiring these waters. All the while, he has been busy documenting and has published several books that offer invaluable insights into unchartered aspects of Bahamian history. Just days ago, Commodore Bethel released his latest work: “How The Bahamas and Turks and Caicos Islands Got Their Names” (Inspire Publishing, 2022).

It is a companion volume to his trilogy - The Lucayan Sea: A Case For Naming The Historic Waters of The Bahamas & The Turks and Caicos Islands. Two books in this three-book series have been published: The Lucayan Islands and The Lucayan Sea—Birthplace of The Americas. 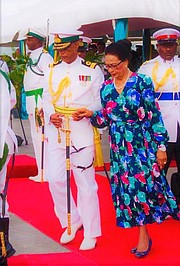 How The Bahamas and Turks and Caicos Islands Got Their Names reveals how Spanish explorers and mapmakers gave this archipelago its first name after its indigenous inhabitants, the Lucayans (now extinct). European naval forces, treasure ships, and pirates also used these tiny islands’ waterways as main transit routes between Europe, Africa, and the Americas, making these isles the epicentre of the Americas’ founding. “The name Lucayan Sea is an authentic name that embodies the profound history, geography, and culture of The Bahamas, Turks and Caicos Islands and the Americas, and it is a reminder for us to do our part to make the world a more peaceful place,” Commodore Bethel told me.

In his latest work, Commodore Bethel sets the record straight on a somewhat controversial subject - important not just to The Bahamas and its visitors, but also a near-forgotten part of American history.

“The name Lucayan comes from an indigenous word that means ‘Island People’. The Lucayan demise (as Island People) represents the vulnerability of humanity in the absence of freedom, justice and peace.

“This series is not all about the Lucayan people; it’s about humanity’s aspirations for longevity, prosperity, and security, and the vital role Bahamians can play as Island People in fulfilling these aspirations.”

“If we are to experience meaningful change as a people, we must learn from the mistakes of the past, improve on the positive successes of those who have preceded us, as we move forward to create success stories of our own.”

This noble charge is one that has taken shape in his own life. Commodore Tellis A Bethel was born on the Fort Hill (Bennet’s Hill) nicknamed after Fort Fincastle, an old British Fort overlooking Nassau Harbour built in 1793. His mother (Lourey Bethel— née Dean) is a descendant from Roses, Long Island. The island was once called Yuma by the Indigenous Lucayans and renamed Fernandina by Christopher Columbus during his first voyage to the New World. His father (Tellis Bethel Sr) was born in West End, Grand Bahama, an island approximately 65 miles east of Palm Beach, Florida, and originally named Bahama by the Lucayans. The island is adjacent to a primary international shipping channel once named the New Bahama Channel (now called the Straits of Florida) extensively used by the Spanish treasure fleets. His grandfather (Leonard George Bethel) father had migrated from Governor’s Harbour, Eleuthera, to West End to marry Joanna Wilchcombe. Eleuthera, Commodore Bethel says, is the birthplace of the modern Bahamas.

Commodore Bethel resides in Nassau with his wife Teri (née Knowles), and the couple has two adult sons. An avid outdoorsman, the young Tellis spent his childhood summers in Long Island in the central Bahamas. There, he learned how to spearfish, make bird traps, spinning tops, sling shots, and plait straw from the Silver Top Palm tree. In his youth and young adult years, he experienced swimming with dolphins at Paradise Island and qualified himself to become a certified Open Water SCUBA diver, a private aircraft pilot, and a certified ultralight pilot. He had also completed a course in skydiving.

He was always fascinated by the beauty of the waters of The Bahamas, having sailed the length and breadth of the country and scenes of awe-inspiring beauty remain etched on his mind today. He vividly recalls the cobalt blue waters off Bird Rock, Crooked Island; the turquoise waters of the Great Bahama Bank near Exuma; and the deep blue waters off Bimini. Also, he remembers the frequent calls to Action Stations that interrupted his sight-psyche during the early days of his sea deployments. Equally interesting for Bethel are the historical maritime events that occurred in and around The Bahamas that shaped the history of an entire Hemisphere and the destiny of the world. He highlights the fact that “our waters are the geographical womb that gave birth to the Americas’ modern nations. To have had the opportunity to sail and protect them was an honour.”

Although he has taken the mail boat to several Family Islands in growing up, the real sea excitement for him began during the summer of 1978, when he was employed as a teenage bellman aboard the popular cruise ship of its day, the S/S Emerald Seas. The Emerald Seas was a World War II troop carrier that was converted into a cruise ship. It offered three and four-night cruises from Miami, Florida, to Freeport, Grand Bahama, to a private cruise island named Little Stirrup Cay (now Royal Caribbean International’s Perfect Day at Coco Cay), then to Nassau before returning to Miami. The cruise ship’s captain, Captain Daniel Zenicazelaya, from Basque, Spain, made it possible for him to get the job. Five years later, the two would encounter each other on the high seas as captains of their respective vessels. Captains Zenicazelaya and Bethel are still friends today. Coincidentally, the Chief Executive Officer of Royal Caribbean International, who Bethel met in Nassau, discovered that they both had worked on the same ship. Following his stint aboard the Emerald Seas, Commodore Bethel worked in the operations department of one of the world’s largest shipping companies - Navios Shipping Company. Navios was headquartered in New Providence and operated bulk carriers worldwide. Bethel applied to join the Royal Bahamas Defence Force six months after the fatal sinking of HMBS Flamingo on May 10, 1980 by Cuban MiG jet fighters. About six months later, he was granted a scholarship by The Bahamas government to undergo his initial naval training at the Britannia Royal Naval College in Dartmouth, Devon, England. His naval sea training included naval patrols around the United Kingdom, Sweden, Denmark and Norway.

During his five-year hiatus from the Royal Bahamas Defence Force (1991 -1996), Bethel developed an awareness that there was something special about the islands of The Bahamas. After rejoining the Force in 1996, he was determined to explore the meaning of the Force’s motto: Guard Our Heritage, and the impact The Bahamas was meant to have on humanity’s betterment. Thus began his research into the significance of The Bahamas’ history, geography and culture. Unique insights gleaned from his research resulted in him becoming a lead advocate for naming of The Bahamas’ and Turks and Caicos Islands’ waters “the Lucayan Sea”. He told me that because The Bahamas has full jurisdiction over its archipelagic waters, all that is required to name the waters “the Lucayan Sea” would be approval by Cabinet and the passage of a Bill in the House of Parliament. His impassioned sentiments are echoed by Bahamians from all walks of life, including influencers and nation builders.

Bethel has served as the Commodore Commander of the Bahamas’ military Institution, the Royal Bahamas Defence Force. Today, he serves as head of The Bahamas Security Forces Inspectorate. With national service as his watchword, he continues to provide invaluable service - not only in maritime protection, but in the preservation of history and the inspiration to move the country forward.

His numerous contributions include:

Throughout his illustrious career, Bethel has seen many people from all walks of life being drawn to these shores, in some cases, to find their own inner peace. With the release of his latest book, Commodore Bethel hopes to be one step closer to seeing his vision of the Bahamas as a beacon of peace, perched in the beautiful waters of the Lucayan Sea become a reality.

“In the midst of our waters is the Tongue of the Atlantic Ocean,” he explained.

“The purpose of a tongue is to communicate a message to the world. In naming our waters the Lucayan Sea, Bahamians will be communicating a message of peace.”

Commodore Bethel’s books are available in Nassau at Logos Bookstore, Doongalik Studios, and Eleuthera at Office General, and The North Eleuthera Craft & Snack Place. This latest book is also available on Amazon in paperback and Kindle formats, with his other work.

Sadly, the Lucayans are long gone ............... I have no problem with naming the sea after them, just as much as having the islands being named by Columbus ......... We're just a bunch of displaced, colonized Negroes, anyway.

How about naming it "The North Haitian Passage" ?

He has been writing books while on any given day many of our defense force vessels are inoperable due to their mishandling, including being run aground or colliding with things they should have steered well clear of. Perhaps he 'hogged' for himself the lion's share of the defense force training budget over many years, thereby leaving many other defense force seamen inadequately trained.

@tribanon, I see you’ve reverted to type, smelling shit in a 🌹, you’ve obviously never met the gentleman and gentleman he is!