Two years on after Dorian - and residents still repairing homes 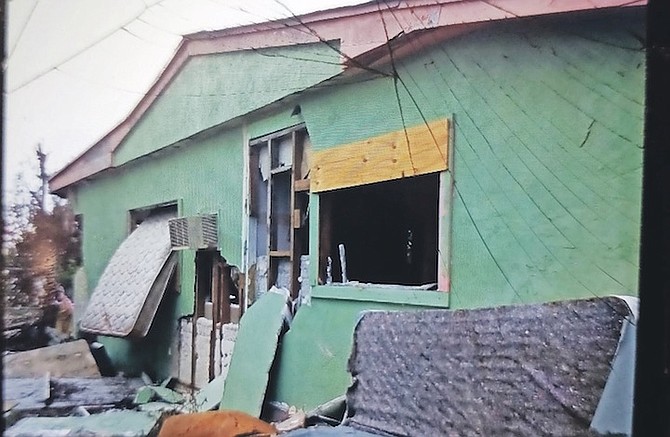 MORE than two years after Hurricane Dorian devastated parts of The Bahamas, Grand Bahama residents are still repairing homes throughout the island, even as the storm season approaches.

In Queen’s Cove, Kendal Davis said repairs are still going on at his single-story residence at No 23 Grover Way.

Queen’s Cove was one of the areas hit hardest by Hurricane Dorian in 2019. The community located along the northern coast of the island experienced 18ft to 20ft storm surges during Dorian.

About 90 per cent of the homes there were devastated by the storm. While some homes have been completely repaired, many have remained untouched in their ruined state.

During a visit to the area on Monday, The Tribune spoke to Mr Davis who was busy carrying out repair work on his house.

He said that the roof was recently repaired.

“The repairs have been steady; we are still repairing almost three years later,” Mr Davis said.

He said that he has received assistance from the government’s Disaster Reconstruction Authority (DRA).

“We got assistance from DRA (Small Homes Repair) and from the new people that just came out,” Mr Davis said.

Mr Davis has also received additional assistance from the Mary, Star of the Sea Catholic Church, where his daughters attend school.

“Work is coming along, but we still have quite a bit to do,” Mr Davis said. The cabinets are not done yet and we still have some ceiling work.

“We just got some assistance from the DPS, we filled out the form two years ago and they called us a couple of weeks ago and they did the roof. And they said we would also receive assistance with some of the work inside. And we still got some tiling to do.”

Mr Davis and his family have not given up on Queen’s Cove, even though it has been affected by previous storms.

He said that it is a close-knit community that has a large mix of people of various nationalities.

“This community is one where everybody hails one another and looks out for each other here,” he said.

Mr Davis moved back home on December 31, 2021. He has been carrying out the repairs on the house himself.

He recalled the devastation he saw when they returned to their house after the storm.

“When we left here (before the storm) everything was intact. And when we came back on the 4th of September it was a disaster,” he said.

“The walls were gone, and parts of the roof were gone; all the furniture was ruined, and everything was in the front yard - it was unbelievable.”

Mr Davis retired last year from the Bahamas Technical & Vocational Institute. He moved back home on December 31, 2021, and has been carrying out the repairs on the house ever since.