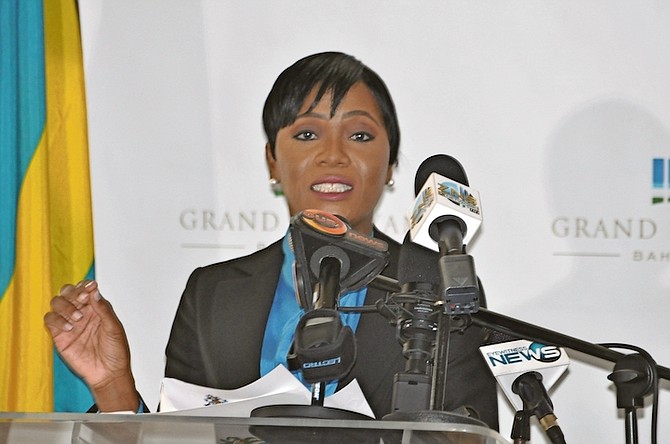 GRAND Bahama Minister Ginger Moxey said the sale of Grand Lucayan Resort will have an “enormous trickle-down effect” on the island and for the Port Lucaya Marketplace.

She is also optimistic that it will position the island to become the events and entertainment capital of The Bahamas.

On Wednesday, Acting Prime Minister Chester Cooper announced in Freeport that a buyer had been identified for the resort. Lucayan Renewal Holdings Ltd, a special purpose vehicle that owns the hotel, has entered a sale agreement for $100M with Electra America Hospitality Group.

When asked what this means for Grand Bahama, Ms Moxey said: “It means so much to the people of this island. This property was like the anchor tourist product for the island.”

She indicated that the Port Lucaya Marketplace that is located next door has been significantly affected because of the resort’s closure.

“Port Lucaya Marketplace has not had business that it normally has as a result of the closure of many of the properties. So, the trickle-down effect is enormous.”

Straw vendors and tenants at Port Lucaya Marketplace were struggling prior to 2019. The lack of foot traffic from Grand Lucayan has resulted in businesses closing in the area.

Straw vendors had complained of the inability to pay rent for their booths due to lack of visitors in the area. After touring the straw market and speaking with vendors, Ms Moxey and Tourism Minister Chester Cooper were able to reinstate the stipend that was provided to them.

“When it comes to group business events, this is the place that everyone came to. So, I can’t begin to re-emphasise how important this day is to Grand Bahama Island and the people. We look forward to this relationship and what it means for the people here,” she said.

Ms Cooper anticipates that the sale of Grand Lucayan will attract more investor interest to the island.

“The reality is that GB has some very great opportunities. There are some significant potential properties to be invested in GB. We anticipate it will trigger a spree of other significant investments in hotel and other industries,” he said.

“When I talk about this being the renaissance for the regrowth and rebirth of GB, I believe that is what we are talking about … the message here today is that GB is open for business and we hope to attract even more investors to our shores,” Ms Cooper said.

The minister was then asked about government’s priority about the Grand Bahama International Airport, versus spending $30m for a baseball stadium in New Providence.

Ms Moxey blamed the current situation and condition of the airport on the previous administration.

She said that generators have arrived on the island and that situation is being dealt with.

Mr Cooper, who is also minister responsible for aviation, said that they have received many interests from investors interested in entering PPP to redevelop GBIA into a world class facility. In the meantime, he noted that interim work is currently underway to the airport.

“GB has been neglected for a very long time. We cannot undo the decades of neglect for many of the infrastructural components in GB, but we can do our part and we will,” he said.

“Firstly, let me say building a world-class airport takes time. It has to be properly designed and we have to find the right partner, and build a proper airport, which takes 18 to 24 months.”

Ms Cooper stressed that the condition of the airport hurts him as aviation minister. “I have told the story over and over of how I come to GB, and I see the absolute decay since Hurricane Dorian. The ravages at the various hangars that stood is a constant reminder of Dorian, and I have been brought to tears about it.

Mr Cooper said at the end of the day Grand Bahamians are going to be very proud of its main gateway to the island.

He stressed that for two years Bahamas Customs and Bahamas Immigration officers and ticket agents sat in trailers at the airport and “using back houses and porta potties.

“We are doing something about it. I am sorry about the passion, but this grieved me as now the minister responsible for aviation.”

He reported that they have already taken steps to get proposals to rebuild the interiors of the domestic section to ensure that their airport workers are properly accommodated in the short term.

“So, there are interim measures. You (are) going to see more demolition to ensure this place is cleaned up and presentable when our guests and residents arrive here on GBI. They are going to feel welcomed; they are not going to feel like they are arriving to war-torn destination.”

“So, we are committed to making this happen. We are thankful to Russ (Urban of Electra) and his team for the investments they are going to make very shortly. And I tell you GB is going to be that events and entertainment capital of The Bahamas. You will have the resorts to be proud of and an international airport you can be proud of,” Mr Cooper said.

Obviously Moxey is oblivious about the history of "trickle down economics". Bottom line is that it has never worked and is more often referred to "bread crumbs economics".

We waiting for the drops to trickle from 1973

Isn't it said the mentality of government leaders. They hope the elites come in and make the money and something trickles down to the people. Why not give people the tools they need to be their own owners, so they do not have to have anything trickle down but make it and have it for themselves.

What did it take in concessions to supposedly get the buyer to pay $35M over the previous proposed sale? Electra has announced they do not intend to start on this property refurbishment until ‘sometime next year’ and they want to see a serious commitment from the government on renovating FPO…

Electra will ask for more concessions, the proof is in the pudding when eaten” we’ll see when transaction closed they will get their $100 m back gold plated several times if paid ever. Now they are in the best bargaining position what should government do now? Head may roll soon once closing details and side letters published.