STATESIDE: The US and its NATO allies’ Ukraine objectives 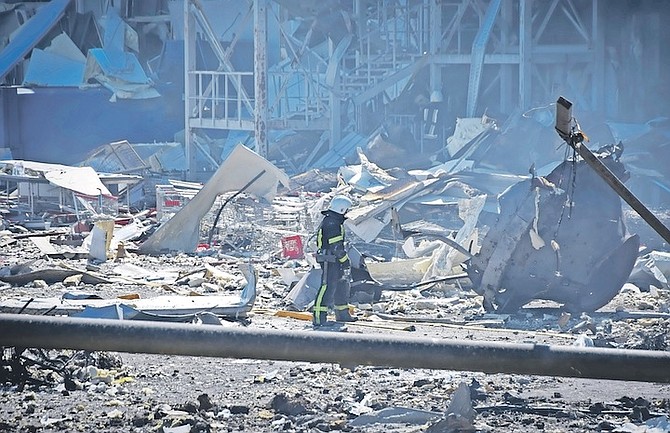 A UKRAINIAN firefighter works near a destroyed building on the outskirts of Odesa, Ukraine, Tuesday. (AP Photo/Max Pshybyshevsky)

SINCE Russia invaded Ukraine three months ago, we have all heard many times about how the US and its NATO allies are carefully walking a tightrope to ensure that Ukraine has a fighting chance to repel the invaders while not acting in such a way that would provoke Russia and its president, Vladimir Putin, into even considering launching nuclear weaponry, either on the battlefields of southeastern Europe or against Western targets.

Even as US president Joe Biden famously blurted out in Poland that “Putin cannot be allowed to continue to rule” Russia, the Americans have professed repeatedly that they are not seeking regime change in Moscow. They say they just want Ukraine’s wish for a cease-fire to prevail.

But in recent weeks, the US, UK and other NATO nations have been shipping weapons systems to Ukraine that have real offensive potential. As the Ukrainian fight to defend their country against the Russian bear continues not only to persist but to show signs of intermittently prevailing, headlines are popping up in the national American media that announce a gradual evolution of NATO objectives. Increasingly, anonymous and even named sources in Western capitals are changing their tune.

They are seeking victory for Ukraine, specifically at the expense of Putin, his imperialistic dreams, and the Russian army.

In the process, Ukrainian president Volodymyr Zelensky must be credited with a succession of triumphant personal performances. He has clearly influenced what is looking like an inexorable resolve by NATO to defeat Putin and put to rest any future possibility that he and his military will again threaten NATO – and perhaps non-NATO – nations on his western flank.

There has been relatively little speculation about the three “newly” independent states of the trans-Caucasus region (Armenia, Georgia and Azerbaijan), or the five independent Muslim Central Asian nations of Turkmenistan, Uzbekistan, Tajikistan, Kazakhstan and Kyrgyzstan. What if in the future Putin were to cast a covetous eye in that direction? All eight of these countries, independent for roughly 30 years now, were formerly Soviet provinces, as were Ukraine, Belarus and Moldova.

Policymakers in Washington, London and Berlin must be mulling these questions. At some point, as Western historians and pundits often remind us these days, an arrogant bully and tyrant such as Putin (or Adolph Hitler, among numerous infamous 20th Century examples) must be forcefully confronted. Otherwise, they will just continue to gobble up weaker neighbours in a ruthless quest for power and influence.

Let’s fast forward ten years. You’re reading a recently-published history of the Russo-Ukraine War. You read that “by May of that year (2022), it was increasingly evident that America and several of its staunchest allies, including Britain, were already at war with Russia. Once they got over the shock of seeing the supposed Russian juggernaut foundering embarrassingly in an inept attempt to quickly overwhelm the Ukrainian army and seize its capital Kyiv, Western generals and policymakers realized that if they gave the Ukrainians the weaponry to defend themselves, Russia could be beaten on the battlefield and humiliated in the eyes of the world. American and Allied involvement steadily increased to the point that Russian defeat became inevitable.”

Does that really sound so far-fetched this morning?

The White House certainly wants you to believe its aims are much more modest. Consider the sinking of the Russian flagship “Moskva” off the Ukrainian coast on April 14, on the day before Good Friday.

A US military source incautiously revealed the other day that American intelligence sources had provided critical assistance to the Ukrainian military in their successful missile launch that doomed the Russian battle cruiser.

Many observers had suspected US involvement, but it had not previously been confirmed, even anonymously.

Here are the two most able and visible Washington spokespersons in the current administration, responding to reporters’ questions about the sinking of the Moskva:

“We had no prior knowledge of Ukraine’s intent to target the ship,” White House spokeswoman Jen Psaki said. “The Ukrainians have their own intelligence capabilities to track and target Russian naval vessels, as they did in this case.”

When he was asked about reports that the U.S. provided intelligence on the Moskva, Pentagon spokesman Admiral John Kirby said Ukraine receives “relevant and timely” intelligence from the U.S., but also gets assistance from other nations and makes its own decisions about how to use it.

“And if they do decide to do something with that intelligence, then they make the decisions about actioning it,” Kirby said.

Do you believe them? Some are beginning to write publicly about the growing American and Western involvement in Ukraine’s defense.

Perhaps the most surprising evidence of this expanding cooperation is the reported killing so far of 12 Russian generals on the battlefield.

This just doesn’t happen in modern warfare, where the senior general officers are ordinarily back at field headquarters exercising overall command and, importantly, briefing political overseers back home.

Speaking of a news report about the U.S. role in supporting Ukraine’s killing of Russian generals, Kirby said American agencies “do not provide intelligence on the location of senior military leaders on the battlefield or participate in the targeting decisions of the Ukrainian military.”

Really? The Ukrainians are so proficient that they accomplished this decimation of Russian army leadership all without any Western assistance? This is hard to believe.

Strongly undergirding the American administration’s growing support for Ukraine is the fact that there is wide, bipartisan support for Ukraine in Washington, even in an American Congress so divided along partisan lines that agreement the sun sets in the west might take weeks to negotiate.

The American administration has already provided more than $3.4 billion in military assistance, and US forces are actively training Ukrainian troops in the use of howitzers, drones and other hardware in a war now focused on the eastern Donbas region of the country.

The White House recently announced an additional $150 million in military support that included artillery rounds, radar systems capable of detecting artillery projectiles, and other equipment. Other packages of various kinds of assistance are discussed in the national press and electronic media every day. Interestingly, one of the most effective defensive weapons in use by Ukraine is a species of “suicide drones” made in Turkey.

Writing this week in the Washington Post, Representatives Liz Cheney, the Republican congresswoman from Wyoming, and Jake Auchincloss, a liberal Democrat from Massachusetts, who disagree on almost everything, joined forces to further underline congressional support for the US war effort in Ukraine.

“The US should rally its NATO allies to make it clear that Putin must not benefit from his aggression. We both signed the Ukraine Democracy Lend-Lease Act which will enable more materiel support for an ally whose cause is existential. Our own American security requires the survival of (Ukrainian) freedom and the defeat of Russian forces. In defending Ukraine’s democracy, we stand up for our own democracy.”

Biden signed the Ukraine Lend-Lease Act as soon as it reached his desk this week.

Meanwhile, Western Europe is moving to reduce or eliminate its huge dependence on imported Russian oil and natural gas.

While there is some grumbling in many Western nations about the pinch in energy prices, popular support for opposing Putin’s war seems to be holding fairly solidly.

Japan has joined those opposing Putin. Prime Minister Fumio Kushida warned that Ukraine’s situation today might be East Asia’s crisis tomorrow if Russian aggression is not stopped. He said Japan would stop all advanced technology exports to Russia. His defense minister said Japan would “continue to send as much support to Ukraine as we can.”

How about China? “So far,” US secretary of state Anthony Blinken told reporters, “we are not seeing significant support from China for Russian military operations.” Western observers also haven’t reported a significant increase in the Chinese threat to its “lost province” of Taiwan.

Meanwhile, U.S. Central Intelligence Agency Director William Burns wisely said on Saturday that Putin believes he cannot afford to lose in Ukraine and cautioned that the West should not ignore the risk of the use of tactical nuclear weapons by Moscow.

“We don’t see, as an intelligence community, practical evidence at this point of Russian planning for a deployment or even use of tactical nuclear weapons,” Burns said.

He cautioned, though, that “the stakes are very high for Putin’s Russia.” In other words, watch out.