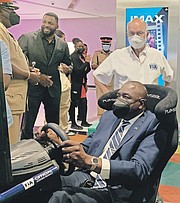 THERE are 145,000 registered vehicles, give or take a few, in The Bahamas, 90% of them likely on an island that measures 21x7 miles. The only thing we might have more of in terms of numbers is cellphones, but then there is one big difference. Just about everyone knows how to use a cellphone.

It’s hard to hold someone’s attention when you announce you’d like to have a chat about road safety. It’s a lot more fun to watch a video of Snoop Dogg than one on car handling on roundabouts the right way. But this week, everything seemed to come together in the world of cars and the drivers who love them, show them and race them.

It started in Miami with the Formula One Grand Prix last weekend, May 6-8, with trials and events and entertainment galore leading up to the main race on Sunday afternoon. F1 racing is huge, some say the most watched sport on TV (maybe because it feels like they are always racing somewhere or maybe it just refers to motor sport in general but no one questions that it outranks the Super Bowl and you thought that was big).

Back to Miami. The public went wild. Oracle plopped down a cool $500m to grab title sponsorship for Red Bull F1. Starting price was $500 a day for general admission before the clamour for glamour drove them skyward. Starting tickets for the Paddock were $12,000 for a three-day pass. 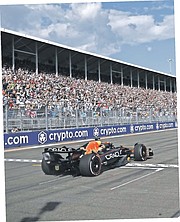 There were reports of scalpers selling tickets for the Sunday race for $35,000. And demand exceeded supply.

A-listers were everywhere. Michael Douglas. Tom Brady. Michael Jordan. And when Bahamian Paolo Garzaroli, a pretty tall fellow himself, spotted the basketball great, he was ready. He whipped a cigar out of his pocked, and in a flash, reached over Jordan’s handlers’ hands and placed a Graycliff cigar in Michael Jordan’s hand at the end of an arm that extended the better part of a short city block. Paolo is no fool. Along with the cigar, he passed MJ a business card. And next thing he knew, the basketball legend was whatsapping him, thanking him for the great cigar.

Lest you get the wrong impression, you should know that Paolo is a smart businessman, not a fool or an A-lister paying thousands of dollars for the opportunity to smell the aroma of engine oil and burning rubber. He was the guest of FIA director and former race car driver David McLaughlin, a name you might remember from Bahamas Speed Week Revival. McLaughlin is also a friend of The Bahamas for the work he has done with edu-karting, making the experience of karting possible for hundreds of young Bahamians through cooperation with both the Ministry of Education and the Ministry of Youth, Sports and Culture.

With the stars aligning in all things cars this week, McLaughlin was back in The Bahamas for the first time in more than two years, a separation induced by COVID. His arrival was in the line of duty of assisting with the United Nations Road Safety Month with this year’s theme safety in school zones and wherever children play or roam.

If you don’t think road safety is important enough to spend time worrying about, consider this: there were more than 9,500 traffic accidents in The Bahamas in 2021.

That’s probably a higher number than all the people who bought new houses last year. Some of those accidents were probably minor, but they were bad enough to be reported. Imagine how many fender benders go unreported. Then think about this – imagine if one of those accidents involved a child or grandchild or spouse of yours. Imagine if they lost a leg or the ability to speak. Imagine if their spine was crushed and they would spend the rest of their lives in a wheelchair.

Mr Mclaughlin, please keep up the good work, even if you keep someone’s attention when you talk about road safety. Show the video of those crashes. The number of traffic accidents was up 11 percent last year. Some 46 people lost their lives in one of those crashes. Some 11 percent of those, or a total of 1,239 accidents, were hit-and-run.

There may be reason for hope. This year’s UN Road Safety event at Fusion yesterday drew good crowds, including a strong representation from the Royal Bahamas Police Force, the antique Auto Club, media, and instructors from just about every driving school in Nassau. It’s a good thing that cars can’t do wheelies, though I have seen some on 4-wheeler ATVs try.

One death is too many; 9,500 accidents in a country this size is unacceptable. All it takes is the sight of a mangled body, a crushed child, a loved one bleeding to death to make road safety an issue we take seriously, even if it is not as entertaining as a Snoop Dogg video.