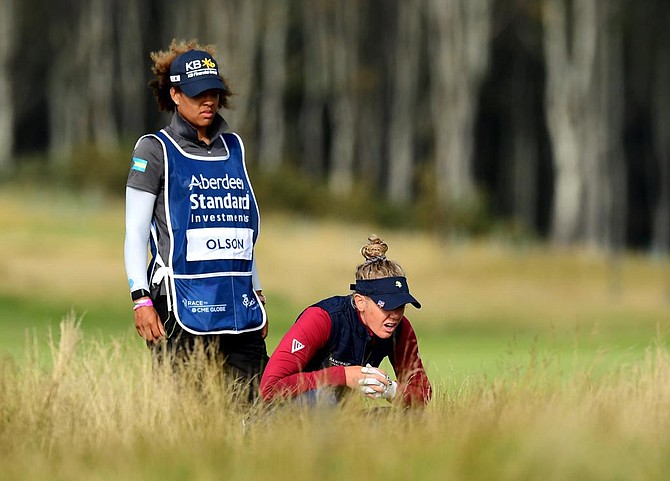 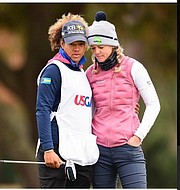 A MOMENT of prayer: After a shocking death in the family the day before, Amy Olson, right, leans on her caddy and friend Taneka Mackey, left, for a moment of prayer during the last hole of the final round at the 2020 US Open.

MEETING Taneka Mackey is an eye opener. She seems to shatter stereotypes all around her. You may think that because she’s a golfer and a professional caddy that she might be somewhat reserved. But Taneka is very down-to-earth with that raw, pure island girl quality in her mannerisms and lingo. You may think that because she has made news all over the world, that she has her sights set on lands far away. 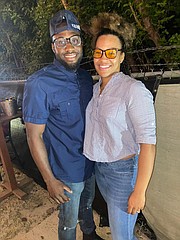 But Taneka has a plan for the future that will bring her back to her roots in The Bahamas, helping to shape future leaders. You may think that because she travels so much, she doesn’t have time to settle down. But, Taneka is happily married with a husband that counts down the days until his wife is back in his arms after another successful LPGA tournament. You may think that being an athlete and an ambassador for her country means she’s always at the top of her game. But Taneka battles multiple sclerosis and requires consistent treatment. You may think that with a professional caddy gig, that Taneka is raking in big bucks. But it costs a lot to make it happen, and she’s doing her part to represent the country. You may think that a super cool young lady who rubs shoulders with golf stars doesn’t have time for faith. But her Christian walk is her greatest profession and with it, she’s prepared to take on the world.

Taneka was born and raised in Nassau, Bahamas, to parents Juan and Kris Sandiford. For the first two years of her life, she lived in the Bain and Grants Town area, before her family moved to Centerville. When she was 13, they moved into the Fox Hill community, giving her a well rounded experience in some of the cultural areas of New Providence Island.

Sports has always been in her blood. Juan, a Nassau native, is a retired teaching professional. Her mother, who hails from Iowa, USA, ran hurdles in high school and was a very good softball player. Her older brother Terrell and her younger brother Garrett loved playing sports growing up. She is only two years younger than Terrell, so anything that he did as a boy, she tagged along. At an early age, they both swam competitively. When he wanted to try soccer, she went foot-to-foot behind him.

TANEKA MACKEY, left, walks ten miles a day with a 45 pound bag when on tour caddying for Amy Olson, wearing the Bahamian flag and a big smile.

“Golf came along when I was ten,” Taneka recalls.

“My mom looked through old newspapers when we were on vacation and saw an ad about the Bahamas Golf Federation. In six months I made the junior national team and travelled to the Dominican Republic. Travelling is what kept me in golf at an early age.”

In high school, Taneka fell in love with basketball. After graduating from St. John’s College, she went off to Pensacola Christian College and continued to play basketball. 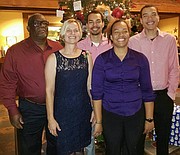 But golf was always there, and has been paving uncharted roads for her even to this day. Taneka ended up receiving a full golf scholarship to Redlands Community College. She then continued her education at Chicago State University where she received another full scholarship to play golf there.

She holds an Associate’s degree in both Elementary Pre-Education and Psychology. She also holds a Bachelor’s degree in Business Management.

“Unsure what I wanted to do in 2017, I went back to Redlands and became the assistant golf coach and this is when I got my caddying breakthrough,” she says of her time after university.

“During the Christmas break I caddied at the Pure Silk Bahamas Classic and got randomly paired with Amy Olson. We hit it off from the jump and after the collegiate season ended, I worked for Amy for five events. In December of 2017, I received a text from Amy asking if I would work for her again in The Bahamas and then she said... how would you like to go to Australia? Once again, my love for travelling made me extremely interested in this job. Now, five years later, I am still working with Amy.”

Taneka travels with Amy to over 18 countries a year. They have travelled all over the United States, Canada, England, Scotland, Thailand, and Singapore. Amy will be 30 on July 10. Taneka will be 28 on June 1. They have found a formula for success that keeps them both focused on their goals.

“Caddying is an amazing job,” she tells me.

“It is rewarding, fun, and you get to travel the world. The most important thing is you have to be strong physically and mentally. It’s long days and lonely nights. So this is when I lean on God and spend a lot of time reading the Bible. It’s a family away from home.”

I wanted to know what it takes to be a good caddie.

“There are three rules: show up, shut up, keep up,” Taneka said.

“It calls for walking ten miles a day and carrying a 45-pound bag. You can’t be far behind or make your player wait on you. Every player has their own style, so you adapt to what they want. But you have to know how to get yardages quickly, know where the wind is coming from, and how far the player hits each club. But most importantly, you have to know how to bring your player down-to-earth if they get too high, and lift them up if they get too low.”

I saw these virtues in action in a photo Taneka sent me of her and Amy on the course. It was the last hole of the final round at the 2020 US Open. Amy’s father-in-law had just died the day before. As Amy leaned in to her caddy and friend for support, Taneka quickly prayed for her and comforted her, letting her know that she was doing a great job and she was proud of her. Amy finished second.

“Golf has shown me that you can hit the perfect shot and get a bad bounce or break just like life,” Taneka said. You can do everything right but someone else just happens to be better than you that day. It also shows me that every hole is like a new day because it’s a clean start.”

Taneka doesn’t get to play a game of golf for herself very often, though. It’s hard since she’s on the road 27 weeks out of the year, and the sport is “extremely expensive” in The Bahamas.

The cost of the sport is one even caddies have to bear: “It’s a commission-based job; so I can go five months without making money and then go two months making good money. But I also pay for all of my expenses - airfare, hotel, rental car, food, while also paying my medical expenses. Aliv helps me, they pay for my cell phone, so I’m extremely grateful for that.”

Without more sponsorship, Taneka may not be able to sustain the cost of a job which not only sheds light on her, but her country, as she is making history in the sport of golf. She follows in the footsteps of leaders like Agatha Delancy, National Sports Hall of Fame inductee for golf and Georgette Rolle, LPGA pro and founder of 14 Clubs Golf Academy. My son, Ras Elijah Delancy, has played golf at the national and collegiate level and would love more time on the green, but the costs can set parameters on young golfers who would like more time on the green.

Taneka is the first Bahamian and first black female to caddy full time on the LPGA Tour. Her future plans include returning to The Bahamas to run her parents’ school, 1 on One Pre-school and 2 by Two Academy. She then wants to expand it to an elementary school with state-of-the-art sporting facilities.

“My husband (Thomas Mackey) works here in The Bahamas; so what I miss most about The Bahamas is him,” she said.

“My mom and dad live here also. The Bahamas is like my happy place. And when I come home, I get to help out at my parents’ pre-school. So I get to inspire and talk to the next generation of Bahamians. The school is a way to give back and give kids a great foundation. Being involved in so many sports, I didn’t have time to get in trouble. Kids today have too much free time. Plus, sports teaches discipline.”

Four years ago, Taneka found herself facing one of her toughest battles. She was home in Nassau, out for a run when she had a seizure. She was diagnosed with multiple sclerosis, a chronic disease affecting the central nervous system. Doctors found more than 20 lesions in her brain and two on her spine.

“I have learned how to listen to my body extremely well,” she told me.

“I can’t overheat, and rest and no stress are key. I do a seven-hour infusion every six months. I have to do an MRI of my brain and spine every year. I’m still on seizure medicine and will most likely be on it for the next five years for sure, but it could be the rest of my life. I take vitamin D3, probiotics, fish oil and I take seizure medicine twice a day. I have to eat lots of fruits and veggies - kale is really good. I have to meet with a neurologist twice a year and a doctor for epilepsy once a year. I also do blood work twice a year - all just for MS.”

Taneka is treated in Iowa where most of her mother’s family and her older brother Terrell lives, so she makes the most of her trips. When she considers her time on the road and the amount of pay she takes home, Taneka knows it can be a tough decision to keep caddying.

“I continue to do this job - yes I love it, but also I know I am inspiring many people,” she said.

“Being the first Bahamian and first black female, while battling multiple sclerosis - which has no cure. MS in itself can be very unpredictable. It can be from a person like me with no symptoms to being in a wheelchair and not able to see. It’s inspiring others that honestly keeps me going and I know God has me here for a reason.”

“That’s why when I’m done, I’m coming home to operate a pre-school and open up an elementary school.. not for the money, or because it will be easy. It’s about helping the next person.”

Wow.. My name is William Lee. I am from Nassau, Bahamas but now live in Ocala Flordia. At one time I was the Vice President of the BGF and I remember Taneka and I teamed up a few times to play in our local tournaments, (and did quite well in some, thanks to her golfing skills and my high handicap!) I think she was around 14-15 then. I also remember having some conversations with her about life, her future and how things were going for a young Bahamian female golfer. At one point, I lost touch with her after awhile, only to find out that she was in Pensacola Florida in college. I remember her as ALWAYS being VERY polite and NEVER saying a word when I had the (often) errant shot when we played together. Reading this article renews my faith in the younger generation and also makes me feel SO proud as to being a small part in her life during her formative years..