EXUMA DEATHS: CALL FOR AUTOPSY IN U.S. – Findings still not released over tourist fatalities at Sandals 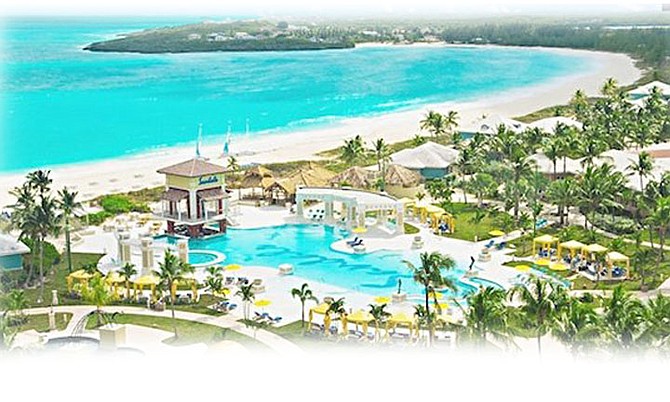 FAMILY members of the three American tourists who were found dead at Sandals Emerald Bay resort in Exuma earlier this month want US pathologists to perform another autopsy on the victims, Health Minister Dr Michael Darville revealed yesterday.

According to Dr Darville, those requests are currently being “entertained” by officials.

This comes after Deputy Prime Minister Chester Cooper told reporters last week that autopsies of the American victims had already been completed. However, he noted the findings have not been released.

“To my understanding, there is still some investigations ongoing at the Sandals resort,” Dr Darville said when asked for an update into investigations.

“We also have the pathologist in (the) country who have done their job and samples were sent to a very reliable lab in the United States and a toxicology report was still outstanding.”

“There was requests by family members of the deceased to bring in pathologists from abroad to do another autopsy because you know to move bodies across water, they have to be embalmed and so that request was made. I do not know exactly how far it has gone but we are willing to assist anyone who wants to get to the bottom of their loved ones and so those requests are being entertained but I’m not sure where they are at this point.”

Married Maryville, TN, couple Michael and Robbie Phillips and Vincent Paul Chiarella of Florida were found dead in two separate villas at Sandals on May 6 after they were stricken by an unknown illness.

Police said the victims – all in their 60s - died sometime between 11pm on May 5 when they, along with Chiarella’s wife, Donnis - the lone survivor- visited the island’s clinic seeking medical attention for nausea and vomiting.

Last week, investigators were said to be looking into several points of interest to determine the victims’ cause of deaths, including what they ate as well as whether any “contaminants” were present in the separate rooms where they were found.

Relatives of all victims have since reacted to their deaths.

“Our hearts are grieving and broken, but full of hope,” Kali Hanson said of her parents, the Phillips earlier this month. “We know our mom and dad are experiencing fullness of joy in our heavenly father’s presence. We already miss them terribly. Our parents left a legacy of faith in Jesus and generously loved their family and friends.

“I am just so heartbroken right now … My dad was everything to me,” his son, Austin, told ABC News.

He said the Chiarellas were visiting The Bahamas to celebrate their wedding anniversary.

The Tribune understands that a memorial service was held on Exuma on Monday in remembrance of the victims.

This is not good … and the delay even worse … hopefully the Resort is at least now temporarily closed pending outcome.

The inordinate delay has the odious scent of Fweddy Boy Mitchell all over it. He typically takes great joy in 'sticking it' to the U.S. government whenever the opportunity comes his way.

I smell multiple law suits coming from this case

EXACTLY why no results are being released, Sandals lawyers are probably all over the medical examiners and PM to keep their mouths shut.

I thought the exact opposite. I was thinking the family didn't want the results released. I would think the family are the ones with the power to release the results - not the hotel??

Also, forensic toxicology testing takes at least 2 weeks (sometimes months) due to the number of specimens and number of tests that have to be performed

The police & gov’t have always worked this way, just look at previous cases, the parents and/or victims have little power in the Bahamas. Sandals has remained open throughout their renovations, renting out rooms described as substandard, ie filthy, no A/C etc. ( perhaps they should be thankful) and during the recent ‘unfortunate incidence’ no one in mgt addressed the deaths at the resort to guests then or since.

Them's serious and everything else telling like this and that is ongoing on Exuma words not be casually brushed aside was spoken by Comrade Minister Dr Darville, “To my understanding, there is still some (some is more than one) investigation(s) ongoing at the Sandals resort.”― Yes?

We know what it is, do not need a release.

If they was Bahamians, the headlines would read , and the victims were all known to police…’

Is this ‘New Day , yesterday ‘ government mismanaging the new Covid surge? Everyone claiming to have symptoms and the numbers testing positive increasing exponentially, but the government still sitting on its hands with no mask on.