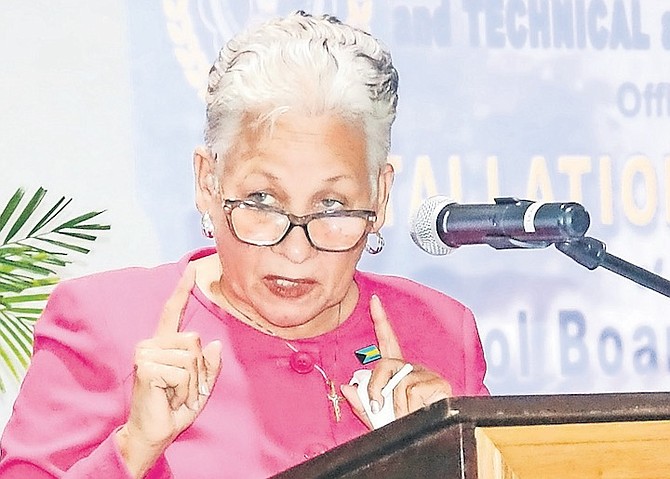 EDUCATION Minister Glenys Hanna Martin said her ministry plans to meet with several stakeholders this week to discuss concerns related to school violence and how government plans to respond to the issue.

This comes after a male LW Young Junior High School student was reportedly injured and had to be taken to hospital following a recent argument with another student from a different school.

There was also another incident at the school involving a student who had to be subdued by administration officials after losing her temper for unknown reasons.

In an interview with The Tribune last week, Education Director Marcellus Taylor said the situation resulted in LW Young’s principal intervening to help de-escalate the situation.

But, according to him, the student in a fit of rage formed a fist and “swung” at LW Young’s principal, “grazing” the administrator’s forehead in the process.

Bahamas Educators and Managerial Union Steven McPhee has denied claims that the principal was attacked.

However, when asked to clarify what exactly happened at the school, Mrs Hanna-Martin would only say that some of the reports surrounding the incident were exaggerated.

Still, she noted that any act of violence on campus was a major concern. She said her ministry was actively trying to address the issue.

“There was an incident at LW Young,” she said before going to a Cabinet meeting yesterday.

“The principal has a view there of what happened. Her union representative, Mr McPhee who is the president spoke to it. I’ve heard other people who were not there commenting on it and so we have to be careful because there was so many exaggerated stories that came out of it which included stabbings and all this kind of thing, which did not happen.

“So, certainly, the ministry would’ve gotten a report and will respond appropriately, but from what I’m understanding from those who were there, the reports are completely exaggerated. However, we do know that we have issues on the campus, various campuses and so this is a continuing concern. I believe it has a lot to do with young people who have been through isolation and the experience of the pandemic and so we are trying to address these issues.

“We know that there are issues, but we have to be careful that we do not feed into national narratives which are not accurate and to feed fear that would take us in a different direction. We want to be a fact-based society that’s rational, that understands what’s happening, being honest about it and moving forward.”

Mrs Hanna-Martin also said officials believe that many students are acting aggressively because of school disruptions caused by COVID-19.

“We have not obtained any data,” she added. “We are seeing some things and we are speculating as to what those things mean, but based on what we are seeing internationally is that there is this science based or imperially based data that children are being affected emotionally.

“We don’t believe Bahamian people would be any different because they have been denied and isolated for very extended periods in terms of their socialisation. So, we are this week in fact, going to meet with some technical stakeholders to look at the situation to try and understand exactly what might have happened here and what will our responses be and we have to get data because the Ministry of Education now has to bring a major thrust for data so that we are able to make imperially based decisions and policies based on the scientific facts on the ground.“

Police officers were returned to nine different public schools throughout New Providence in March, after concerns were reignited about school safety following a stabbing at AF Adderley.

We can only pray most Bahamians never become as dumb as those residing in her constituency who keep voting for this incompetent and most wretched vixen. Just the mere thought that this loud mouthed creature has cabinet responsibility for our country's public education system is more than enough to give anyone a serious case of the heebie-jeebies. Cruel Davis could not have appointed a worse person to have ministerial responsibility for the education of our children.

More lip service???? Omg….. we are soooo exhausted of hearing the same old tired speeches from these same old, worthless politicians. Blah blah blah. Nothing but hot fart. And at the end of the day nothing effective is ever accomplished.

As I’ve stated before, none of these politicians have the will nor the brains to effectively address the situation. Students who are repeat offenders for violence in the public school system should be placed in the Boys & Girls Industrial School. They should lose their liberties and be subjected to acts of strict discipline. The government needs to properly address this crisis (not with words, but with action) and reestablish the Boys & Girls Industrial school. Students who engage in acts of violence are giving us a snapshot into their future. They are the criminals of tomorrow! All of the arm robbers and murderers of today were once violent, problematic, students of yesterday! And they were allowed to grow and fester through our society! The government needs to nip this problem in the bud by first drafting legislation that holds parents accountable for their children's behavior. Secondly, they need to confine violent students to detention and reform facilities. Take away their freedoms and remove these problematic students from the general populace so that other students can attain a worthwhile education!

I swear, our political leaders are so inept it has become beyond embarrassing. They have no foresight or insight on how to effectively deal with violence and crime.

Instead of hiring a degenerative mental patient like Rodney Moncur as a crime consultant, all the government actually had to do was open a dialogue with school administrators, social workers, police officers and teachers. Furthermore it would have cost the government no extra expense seeing that these individuals were already employed by the government. These three disciplines can offer accurate insight as it relates to crime and where the problem is germinating from. Teachers and social workers (excluding parents) are the first to encounter criminal and violent behavior because they encounter these individuals at a young age. They can tell you exactly which individuals are likely to end up in prison or dead based upon psychological and behavioral evaluations. Over 80% of men currently locked away in prison first started their violent streak within the public school system. And if we had listened to teachers back then we would have seen the problem coming. The government needs to collaborate with the necessary parties to effectively address this problem once and for all. Bandaids don’t fix bullet holes. And another “airbag” session by Glenys Hanna Martin isn’t going to fix it either.