Pintard hits out at govt over food programme criticism 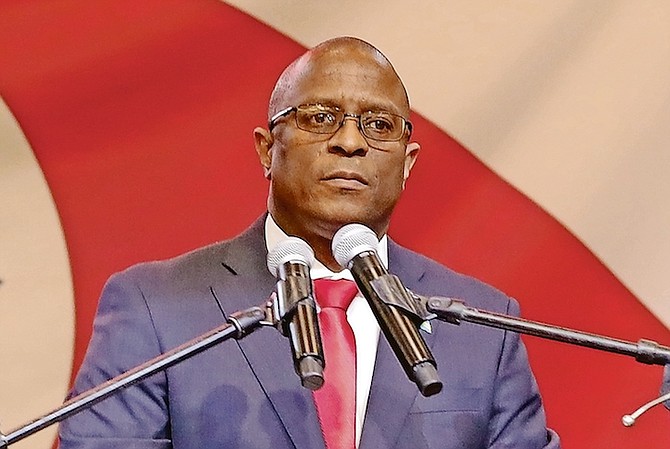 OFFICIAL Opposition leader Michael Pintard has said it is quite unfortunate that the government chose to publicise “fallacious” and “incomplete” information regarding the former administration’s food programme.

Mr Pintard’s criticism followed Prime Minister Philip “Brave” Davis’ revelation on Monday that the government had no record of how more than $10m doled out to two NGOs under the the now disbanded National Food Distribution Task Force was spent.

He also criticised the Davis administration for sullying the reputations of the many NGOs who had made historical contributions to Bahamian society at the height of the pandemic.

“We listened quite attentively to the prime minister laying the food task force report on the table of this House of Assembly,” the Marco City MP told parliamentarians yesterday. “We have been, we believe, very clear in saying earlier that it is most unfortunate that the government has chosen to drip feed the public with fallacious details surrounding a wide range of issues, inclusive of the food task force.

“It’s always a painful experience to listen to private organisations that historically made contributions to The Bahamas and private individuals’ reputation taking a beating and the perpetrators are no less than policy makers who are the caretakers of our country and by extension citizens.

“It is possible to be responsible and to hold former governments responsible for the decisions made or the oversights that they’ve yet permitted to slip through. It is possible to hold individual organisations that are the beneficiaries of resources from the Bahamian people without savaging the reputation of persons who are not in this place to defend themselves.”

The remarks later prompted a response from Mr Davis, who suggested that his remarks were misunderstood by the MARCO City MP.

He said: “Whatever I have said, I noticed the member said I’m smearing the NGO’s and smearing the FNM, but you know again, that’s a view that he has deduced perhaps, but what I have said, but maybe if he had read the audit report that was laid, then he could see whether what I have said detracts from anything that was put in the report. I’m saying that there has not been cooperation and at the end of the day, I don’t have the power to compel anyone to co-operate with me.”

Concerns about the former Minnis administration’s National Food Distribution Task Force were reignited this week after Prime Minister Davis on Monday tabled an audit report on the task force in the House of Assembly.

While tabling the report, he revealed that some $10m of taxpayers’ money that was meant to offer COVID food assistance had “simply vanished.”

According to Prime Minister Davis, the funds – a combined total of over $10m - was sent to two non-governmental organisations working under the task force.

However, he claimed the government had no record of how the money was spent and could not get the information it required from the NGOs despite multiple requests.

While the prime minister did not name the NGOs, the auditor’s report indicated that it was Lend a Hand Bahamas and IDEA Relief, which received $11.159m and $3.988m of taxpayer monies respectively.

But, Mr Pintard took issue with those assertions yesterday, arguing that the report never claimed that $10m had vanished, but rather had said that certain details were not available at the time.

He also claimed that there was no evidence to show corruption or otherwise and urged the government to stop painting the narrative that wrongdoing was done.

“So, as I listened to the report and to the hyperbole, to the use of terms that suggest things that were not in the very report referred to this public by this prime minister, the chorus of this presentation was ‘read the report,’ the Marco City MP added.

“But the report didn’t say that $10m vanished. At the time of the report, certain details were just unavailable. The reality is if any citizen, public servant, NGO or anyone associated with them engage in mis or malfeasance or anything illegal or unethical, any government is duty bound to clearly investigate and to take the relevant action required to hold them into account.”

“We support that, but what we do not support is the presentation of incomplete information, leading the discussion with a conclusion that we have not yet arrived at and that is essentially what the member for Cat Island, Rum Cay and San Salvador did.”

“They gave the conclusion but merely just innuendos but made concrete statements about persons who sought to use the public purse to enrich themselves without putting on the public record the evidence thereof.”

Meanwhile, former Prime Minister Dr Hubert Minnis also defended the work of the programme yesterday, warning that Mr Davis’ comments could make it difficult to attract private sector assistance in the future. He also maintained that all funds expended by the task force could be accounted for.

“Should a disaster hit The Bahamas, God forbid, they would be needed again, but some may be very reluctant to help this government knowing the path that the prime minister is following and knowing what he is saying about them. You can’t try to impugn individuals who are working for the country and doing their best to ensure Bahamians have a great quality of life,” he told reporters outside the House of Assembly.

Yesterday, Mr Pintard also said it was interesting that the prime minister and his team did not seek to present the Auditor General’s report to provide Bahamians with a more wholesome understanding of the programme’s operations.

“All of us would like to know the complete details and all of us want to make sure that no resources of the Bahamian people have been misused in any respect, but the prime minister has chosen to not travel that road,” he said.

The Auditor General’s probe is ongoing, The Tribune can confirm.

The report that was tabled and released on Monday was conducted by Kershala Albury, president and principal consultant at her own firm, ATI Company Ltd.

According to Mr Davis, the report uncovered “18 categories of major deficiencies” largely relating to what he branded as poor record-keeping, lack of documentation and the absence of internal controls over how taxpayer monies were spent to feed more than 55,000 Bahamian families after the economy collapsed almost overnight.

This man of toggle and boggie fame who were You trying to do wrong.