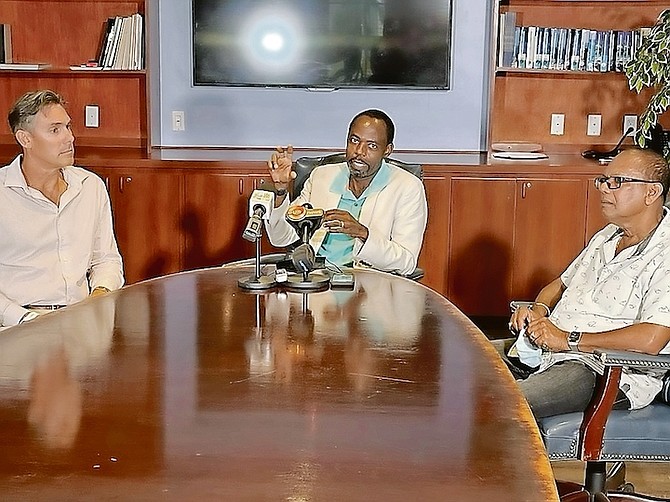 A $1M road works project is being undertaken by the Grand Bahama Port Authority Limited as part of an initiative to resurface roadways in Freeport.

Work is expected to start on Sunday, May 22, at the Fishing Hole Road, and West Atlantic and Adventurers Way roundabout.

Troy McIntosh, GBPA Deputy Director of Building and Development Services, said the City Maintenance and Management section is excited to begin this initiative to resurface roadways within the city.

He said: “Our city has been through many challenging storm events which did catastrophic damage to infrastructure around the island, including our roads.

“But our community is resilient, and we are seeing a positive shift in the economic tide,” Mr McIntosh said.

“Excitement for future opportunities and anticipation of new investments is palpable through the city, so we knew this was the ideal time to start this aspect of Freeport’s much-needed makeover to which GBPA is fully committed.”

Mr McIntosh indicated that roadworks will include main thoroughfares and a number of residential roads.

Mr McIntosh said those locations were selected using their Road Rating System, which allows inspectors to assess the condition and rideability of roads annually.

The GBPA roadworks project went out to bid in December 2020. In March 2022, the Bahamas Hot Mix (BHM) that specializes in heavy civil engineering projects, including major highways, was awarded the bid.

Mr McIntosh said that motorists should be careful while driving in areas where roadworks are taking place.

“We ask motorists to drive with due care and attention while roadwork is underway,” Mr. McIntosh advised.

He noted that there will be flagmen and temporary traffic lights will be in position to direct traffic.

Mr McIntosh urged motorists to obey the speed limit and the posted signs to help ensure the safety of all motorists and crews as they work.

He said delays are expected because there will be partial lane closures in some areas.

On Monday, May 23, Bahamas Hot Mix will proceed to the roundabout at Freeport Bible on West Atlantic Drive to resurface the road there. The work will start at 9am and end at 7pm.

Mr McIntosh said the crew will then proceed south to Rayvin Mall to carry out major undertaking there as well, which will last for a period of three days.

The next location is Beachway Drive from East Sunrise Highway to San Salvador, just short of the Castle. At Bahama Reef Boulevard, from Beachway to Cove House. Then at Tarrytown from Seahorse Road to Westminister in Windsor Park, and from Waterfall Drive to King Neptune to Seahorse Road. The last two locations are Pioneers Way and Grand Bahama Highway.

Ramdeo Ramdass, operational manager at Bahamas Hot Mix, said that they plan to complete the work as quickly as possible. He said the contact is short term.

Sean Geiser said people will be at sites to ensure safe traffic management. He said some roads will be fully closed, including the roundabout at West Atlantic from 9am to 7pm. He said traffic lights will be used at some roads, and at the dual carriageway one lane will remain open.

The Grand Bahama Port Authority said the road resurfacing project is scheduled to be completed at the end of June 2022.

For the latest updates and information on redirected travel routes, residents can follow any of the Grand Bahama Port Authority’s social media sites or visit its website at www.gbpa.com.