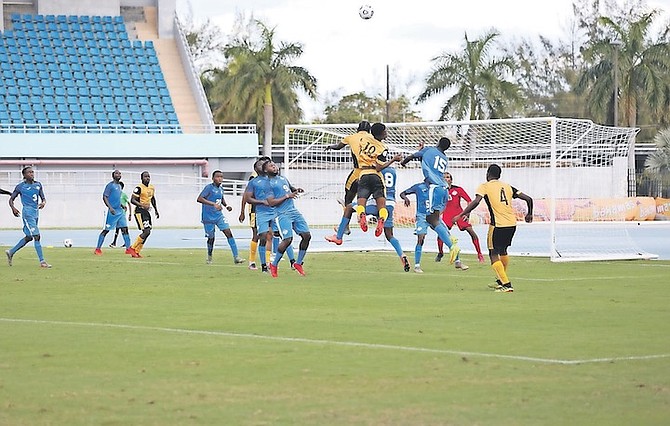 THE Bahamas in action against the Turks and Caicos at the weekend.

COMING off the two-game split of their friendly matches against the Turks & Caicos Islands over the weekend, the Bahamas Football Association has selected its men’s national team that will represent the Bahamas at the CONCACAF National League.

The Bahamas will host St Vincent & the Grenadines on Thursday, June 3 at the Thomas A. Robinson National Stadium and head coach Nesly Jean said the matches against the Turks & Caicos Islands were used as a tune-up to see what is needed for a competitive men’s team.

Although the team selected is slightly different from the one that played in the friendly, Jean said he’s confident that the Bahamas will prevail.

Selected to the team are the following:

“We have a different team from the one that just played. We added some veteran players who didn’t play,” Jean said. “We feel these guys will help us out tremendously in regards to what we’re looking for as we move forward.”

While he declined to comment on any weaknesses on the team, Jean said they have a strong team that can play all over the field, which is a plus going forward.

“We will have a very competitive team,” he said. “It all depends on how well they adjust to the plans that we have presented to them. If they stick to the game plan, we should do very well.

“I expect like any coach out there, for our team to go out there and win.”

The Bahamas has been placed in League B in Group C, which includes St Vincent & the Grenadines, Trinidad & Tobago and Nicaragua. Following their home match, the team will travel to Trinidad to play on Monday, June 6. Their match against Nicaragua has not yet been determined.

As they prepare for their first match, Jean said they just need to be patient and ride the wave of having the fans in the stands at the stadium to cheer them on.

“It’s always important to have that third man in the stadium because whenever we travel, we face teams that have so many fans cheering for them,” Jean said. “So we are encouraging the Bahamian fans to come and cheer the team on.”

This is going on his third year as the head coach of the national team, but the former national team player said it’s been a challenging one ensuring that the players buy into the system that he and his coaching staff, including Kevin Davies, has instituted.

“It’s good to see the different side of the field,” Jean said. “Going out there and training these guys every day has helped me to understand what coaching is all about.

“For the last year or so, I think I have improved and the players are getting a better understanding of what we are trying to implement. So as long as they do that, it makes the job that much easier. But it’s a learning process and I’m glad to have the opportunity to coach them at this time.”

The team, which according to Jean could change in player personnel from match to match, will be managed by Larry Minns.