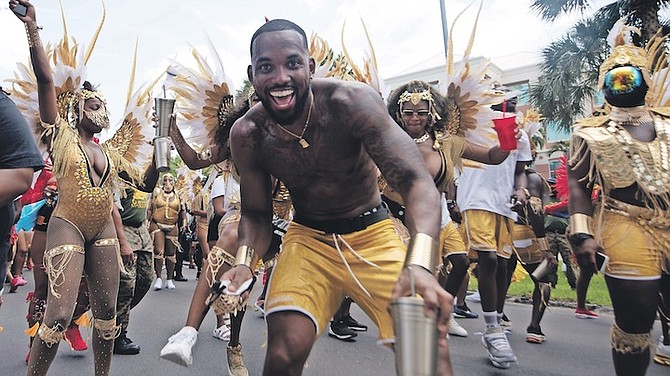 CARNIVAL returned to The Bahamas at the weekend - with about 1,000 revellers taking part in a road parade on Saturday. Photos: Moise Amisial

ABOUT 1,000 revelers flooded the streets on Saturday for a Carnival road parade making for a “perfect” event, according to Rafel Dean, president of the Band Owners Association.

“Everything went as planned,” Mr Dean said the day after the event.

He said Bahamas Masqueraders was the largest band during the Soca-filled event and other bands came together for a collaboration.

“When I did my late ride through, people were out on the parade until after 8 o’clock... and had their tents spending family time or whatever time they were spending. So, clearly they had a wonderful time.”

Mr Dean said the projected total number of participants was about 1,000 and he said his approval from the Ministry of Health and Wellness was for 1,500 people.

He also said they adhered to COVID protocols. Mr Dean told The Tribune there was on-site COVID testing, particularly regarding Bahamas Masqueraders, and there were checks of vaccination cards and COVID-19 test results.

He added that he received no reports of fights and only one report of someone suffering from dehydration.

There was also a concert on Saturday night featuring big name local and international Soca artists.

What a bunch of dummies, celebrating while wearing masks.

Glad they had fun. I didn't like the garbage strewn on the side of the road. But hey, it's only garbage - someone else will clean it up. May I suggest that since they like to leave plenty garbage behind, they hold it in their own neighborhoods and on the roads I travel? Thanks.