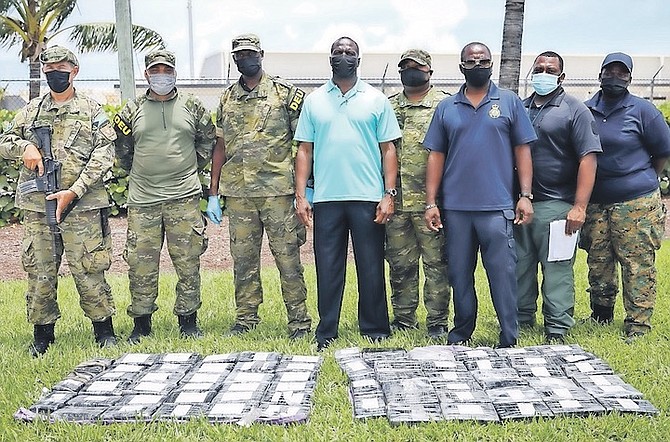 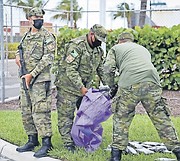 POLICE on the scene of a large drug discovery at Arawak Cay. Photo: Racardo Thomas/Tribune Staff

POLICE arrested 21 Chinese nationals after 68 kilos of cocaine were seized in a $1.3m drug bust on a cargo boat near Arawak Cay on Sunday.

He said: “Police dogs alerted their handlers to several floors in several areas on that vessel. On inspection of those areas the officers found a quantity of a substance believed to be that of cocaine. The total amount was about 68 kilos, which was an estimated street value of $1,300,000.”

“As a result of the find, 21 persons were taken into custody, these are all Chinese nationals, these include 20 males and a female.”

Superintendent Peters attributed this major drug bust to the “robust” amount of information collected by police. He also thanked members of the public who continued to help authorities  investigate such matters.

Meanwhile, authorities seized 16lbs of marijuana worth $16,000 over the weekend after conducting an immigration raid at a residence in the Carmichael Road area.

According to an official report a combined team of officers from the Bahamas Immigration Department and the Royal Bahamas Police Force executed a search warrant on a residence in the Haitian community located on Butlers Way off Carmichael Road at 11pm Friday.

There officers from the Immigration Department arrested two males and a female for the offence of Illegal entry.

After their arrest a police search dog alerted its handler to an area. The officer inspected the area and found several packages containing a grassy substance suspected to be marijuana. The weight of the suspected drugs is 16 lbs and has an estimated street value of $16,000.

While there no arrests were made in connection with the suspected drugs, police say the matter remains under active investigation. The drugs are currently in police custody.

For those familiar with the First and Second Opium wars, there is a sense of irony in Chinese nationals attempting to smuggle opiates into The united States of America.

Where's the other half of the contraband seized in this drug bust? LOL

The Communist Red Chinese ambassador to The Bahamas has already instructed Davis and Cooper to ensure all 21 of those apprehended do not stand trial in The Bahamas and are instead released to officials of the Red Chinese embassy for deportation back to Communist China.

Fwreddy Boy Mitchell has no doubt already told Davis, Cooper and Pinder that this must be done behind the scenes as quietly as possible in order not to disturb the continued excellent relations the PLP government has with the sinister and evil Chinese Communist Party led by the very ruthless Xi Jinping.