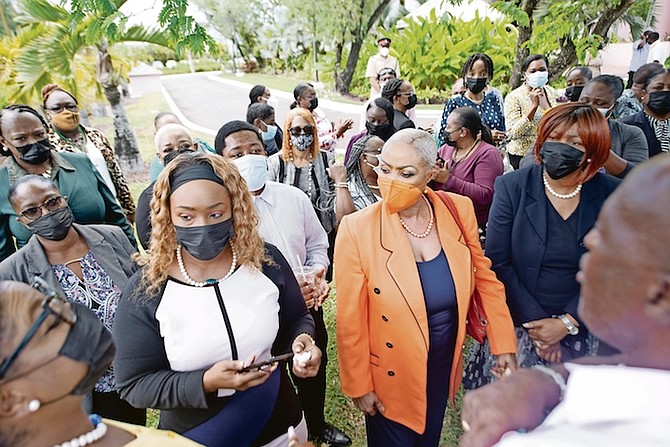 Members of the Bahamas Public Services Union protesting outside the Office of the Prime Minister yesterday. Photo: Moise Amisial

STATE Public Service Minister Pia Glover-Rolle has accused some finance officers of adjusting the system to increase their pay rates, resulting in a collective overpayment of $4m.

According to the minister, normal government procedure in terms of adjusting the pay scales were not observed.

Mrs Glover-Rolle told reporters yesterday that she was sure “consequences will follow”.

The basis of the minister’s claims came from an internal audit that was conducted, which detected some gaps in the controls regarding the finance officers.

Asked to reveal a time period in which this overpayment occurred, she said it was noted when the Davis administration came to office and was ended sometime around January of this year.

Her comments sparked outrage among the finance officers, leading them and their union - Bahamas Public Services Union - to gather outside the Office of the Prime Minister at West Bay Street. The union demanded that Minister Glover-Rolle either provide proof of her claims or retract the statements.

They also provided a copy of a letter purportedly signed by permanent secretary Donella Bodie, dated February 17, 2021, announcing a revised career path and salary scales for accounting and finance officers.

Before yesterday’s Cabinet meeting, Mrs Glover-Rolle said: “An internal audit was conducted and there are some gaps in the controls when it comes to the finance officers.

“What has happened is those finance officers have adjusted the system to ensure that their pay rates were increased based on an approval that they would have gotten that we have not in the public service had any approval or vision of.

“So, basically, normal government procedure in terms of adjusting the pay scales was not observed. This resulted in an overpayment of $4m plus by that same scale of employees where the system would have been adjusted in their favour without the proper government procedures. So, at this time the Ministry of Public Service and the Ministry of Finance are meeting to figure out how we are going to address this administration of scales that was not properly authorised.”

She continued: “The normal policy of overpayment is recovery. So, I’ll say that the audit has revealed some gaps in terms of controls and the policy is to recover. We have found some things as a result of the audit that were done wrong and I’m sure consequences will follow.”

“If there is an overpayment, there is recovery - that is normal. The $4m plus of the government’s money that they should not have should seek to be recovered. We’re not in a position and it’s against policy to allow them to keep the money that isn’t necessarily theirs. In terms of consequences, the financial team, the financial technical team, and the public services technical team are still in communications and that is what is happening.”

The letter from Mrs Bodie said in part that following an ICC meeting conclusion approval was granted for the creation of posts and upgrade of scales for the Treasury Department and Internal Audit with effect from January 1, 2020.

For his part, Mr Ferguson yesterday said he took issue with what he called incriminating comments of the finance officers that intimated that they were dishonest.

He said: “I would like to note this afternoon, these persons standing behind me, finance and accounting officers, are creatures of instructions and hence if that were the case then every public servant would have the autonomy to determine which salary they would like to receive and so we are very concerned when it is going to incriminate or make it appear as if the persons charged with keeping the public purse are dishonest individuals. So, today we challenge the minister to either prove what she’s saying, or to retract her statements.

“We challenge her that where the allegations were made that is the very same domain that she must make her public apology to these hardworking public servants and so we also want to challenge the minister if these persons were illegally or unauthorised paid, then we expect that someone who committed this breach would be disciplined.

“So, we’re not here to play politics today but we demand that whoever carried out or instructed that the payments be made if it was done without proper approval, we expect that those individuals would be brought either before the courts or some disciplinary action would take place.

“The Bahamas Public Service Union will not stand idly by and allow the members to be drugged through the mud. If the need arise, legal action will be taken towards the minister of the public service and so we’re not going to allow them to defame these hardworking public servants who are charged with the responsibility of seeing to it that public officers are paid and whenever there are any special instructions given they come by way of documentation.

“So, we demand whatever documentation was issued instructing their salaries adjusted that the union be forwarded copies.”

Just more gaslighting of the divisiveness kind from Davis and Cooper to distract the public's attention away from their corrupt style of governing which lines only their own pockets and does absolutely nothing to improve the lives of the Bahamian people. Truly sad.

Minister of Housing and Transport JoBeth Coleby-Davis has denied claims she weoponized a vehicle she was driving to knock down and seriously injure a police officer she had an altercation with at a carnival event over the weekend.

lol you do understand an audit was done rite and the auditors stated these facts.

if this is the case then arrest those who did it and fire them. Stop coming to the public with all these stories and then nothing happens.

there is a process for such things, hopefully it will be fast tracked and yes a bunch of talking and no action is really foolish.

who cares if no one goes to jail. someone needs to be named and sent to jail , otherwise, you are playing politics. let the bahamian people see some work done!!!!

Someone seems to have set her up to fail - and she jumped right in. I guess she'll resign and make room for another rookie.

Someone is lying ..... We'll see the truth soon