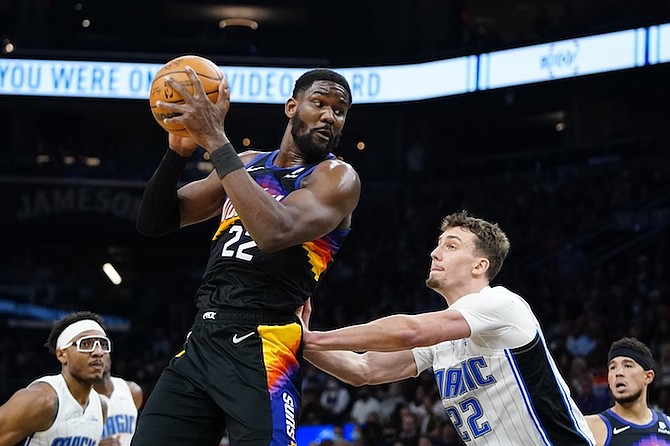 DEANDRE Ayton’s free agency speculation continues to make the media rounds and his agent offered public comments for the first time this offseason on the developing situation between the former top pick and the Phoenix Suns.

“We’re disappointed. We wanted a max contract,” Duffy said. “He went out and was a soldier the whole year, played well, improved his statistics. So, we’re proud of him. A lot of guys handle things differently, but he was very mature about it. Things will work out for Deandre. He’s a valuable player. There’s other teams in the league as well.

“He’s a restricted free agent, so we’ll see how this process unfolds.”

As a restricted free agent, Ayton is free to sign an offer sheet with another franchise but the Suns would still have the ability to match the deal and retain his rights if they choose to do so.

In his fourth season, the 23-year-old centre averaged 17.2 points on a career high 63 percent from the field and 10.2 rebounds per game in 58 appearances.

“Deandre had an amazing season and he’s progressed every year and improved every year. He’s been here and so he’s a big part of what we do. His future with us is something we will address at the proper time which is in the future,” Jones said in an appearance on Arizona Sports 98.7 show Burns and Gambo.

“He’s a free agent and I’ve said all along, he’s about the same things we’re about which is winning. We’ll address it at the proper time.”

Contract negotiations between Ayton and the Suns reached an impasse last April after both sides failed to reach an agreement on a rookie contract extension.

He was eligible for a five-year, $172.5 million extension that could have reached as much as $207 million if he reached benchmarks and incentives.

“Deandre had a great season, a really productive season. I think across the board, when you look at what he did, he improved. That’s a testament to him and the hard work. That’s what you expect from a player of his calibre,” Jones said in his exit interview. “As far as free agency and those things, we’ll address them at the proper time. That happens in July, end of June, but we want to continue to keep our consistency and continuity and keep the guys that we have and continue to help those guys improve upon the things that we did this year.”

Ayton appeared in only 17 minutes of the Suns’ 123-90 elimination loss to the Dallas Mavericks in game seven of the Western Conference semifinals.