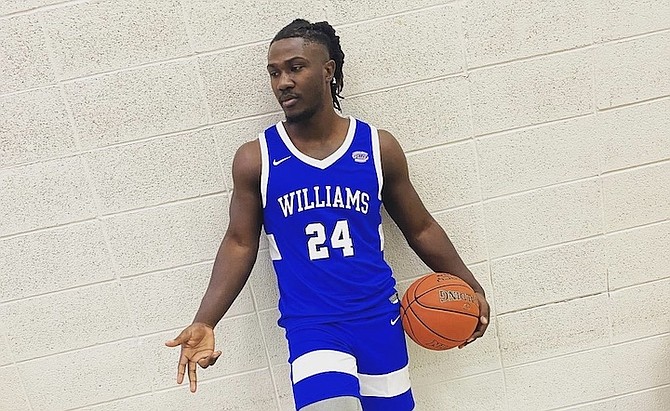 Franklyn Petion has overcome several setbacks over the course of his collegiate basketball career and is now seeking assistance to complete his academic and athletic goals.

Petion’s sophomore season for the Williams Baptist Eagles was cut short due to an ACL tear, but after reconstructive surgery and an ongoing rehab process, the Grand Bahama native is optimistic about a strong conclusion with the programme.

To that end, Petion created a Spotfund account to solicit crowd sourced funding in an effort to complete outstanding tuition payments of $7,000 and become eligible for a full scholarship.

“Right now I’m on a partial scholarship because I signed so late, there’s a chance I can get on a full scholarship now, they have the space, but the money I owe I have to pay before they sign another player,” he said. “But we have discussed it and they do want me back, that’s why I need help to get this done.”

The 6’3” guard suffered the injury just seven games into his first season with the Eagles. He scored 20 points on a perfect shooting night from the field in his debut.

“It was a good fit, the team chemistry was really good, the best chemistry I had since moving to the states. After the first game I knew I was going to go off and it was going to be a crazy year,” he said.

Six games later, a matchup against fellow Bahamian Edriel Martinborough and Evangel University, Petion suffered the injury that sidelined him for the remainder of the season.

“I was excited matched up against a former rival in high school. He beat me every time in high school so I just wanted to beat him in college. I was going off, I was probably going for 30 that game, when I got hurt I had 13 and it was still in the first half,” he said.

“The play where it happened I went up for a layup, I felt it but I didn’t pay any mind to it.

“The doctor said I should have stopped then because it was my meniscus first, but on the next play when I went down, I tried to slide on defence, my knee hyperextended and the doctor said that’s when the meniscus opened up and tore across my ACL.”

It meant that for the second consecutive year, injuries would sideline the versatile guard.

His college career began with Missouri State West- Plains at the junior college level where he had a promising freshman season before an accident sidelined him in his sophomore campaign. After admitted miscues in the recruitment process, he joined former high school teammate Shackeel Butters at William Baptist late in the process.

“I had a great freshman year, sophomore year was okay but I had to deal with injuries, I had surgery on my face after suffering a broken nose,” he said,.

“I had a couple of DII offers, I should have taken one of them, but I missed those opportunities. I felt like I was better than a DII which I shouldn’t have been thinking. I just was thinking I wanted to go DI but I should have been thinking that what really matters is my education. I went to William Baptist with a former teammate Shackeel Butters. The plan was to go there, play my COVID year and transfer, but now there’s a lot going on here.”

Petion began his basketball life in earnest with the St George’s Jaguars under coach Darell Sears.

He credits Sears and his staff for their continued guidance both on an off the court.

“There was a moment in my life where I was about to make one of the worst decisions of my life. Coach Sears and coach McIntosh sat me down and laid out my options.

“They said I could take one path, help my mom and my family or take another path to end up dying or going to jail,” he said.

“The way they cared made me want to change my ways because there’s not much people that do that. For me as a kid growing up people don’t normally do that but to see how much they sacrificed for me, making sure I got to and from school, anything I needed they were there. It always meant a lot to me and made me want to be better.”

Following a successful high school career that concluded with a national championship, Petion saw many of his teammates leave for college on scholarships but those opportunities were not immediately present for him.

“Coach Sears always told me everyone’s path was different but just stick to it. My thing was I stayed working with St George’s and helped out and they allowed me to use the gym whenever I needed.

“I would work out in the morning, noon and night.

“Ms Higgs, who was also a huge help to me was coaching the girls at the time so I starting helping her out and we were able to come away with two titles in those two years,” he said.

“My mindset was just to keep going and not to give up. Watching everyone go off to school was tough, it hurt but it was just adding more fuel to the tank. I know God wasn’t just going to let it happen like that.”

The disappointment led Petion to discover his passion for coaching on the sidelines.

“I’ve always wanted to coach. Coaching in the US would be great to help kids with their recruitment wanting to come here. I want to tell them about my path, what to do, what not to do, what to expect and how to navigate the whole process.”

Currently pursuing a bachelor’s degree in sports medicine with a minor in psychology, Petion is hoping he has an opportunity to complete his academic and athletic career.

“I’m a kid from Freeport, Grand Bahama, raised from nothing. I was in a bad place but I’ve spent years bettering myself, changing and becoming a better person. Getting my degree will be successful,” he said.

“I feel like I can be a good representative of where I come from and how hard you need to work to get to where you want to be.

“I hope to be able to give back to people from my situation as well.”

The link to donate to Petion’s cause can be found at: