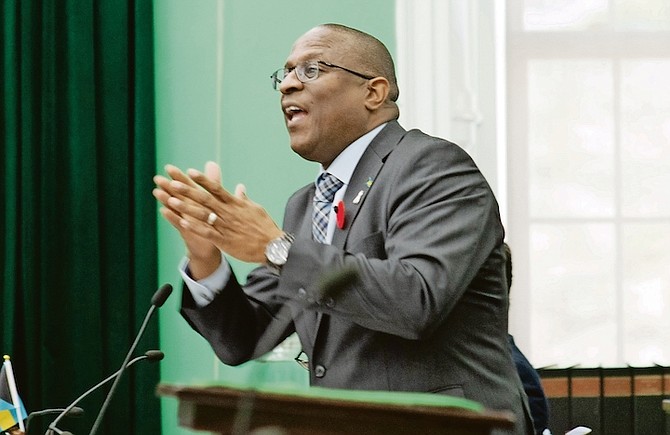 The controversy over Bahamas Power & Light’s (BPL) fuel charge hikes erupted again yesterday after the Opposition’s leader argued that the Government’s “dereliction of duty” had “heaped” a $100m bill on the Bahamian people.

Michael Pintard, in his contribution to the House of Assembly debate on the minimum wage increase, asserted that the 24 percent or $50 per week increase - said to benefit some 60,000 workers - will be wiped out or more than exceeded by skyrocketing electricity bills that would not have been incurred if the Davis administration had continued with the fuel hedging strategy in met in place following the September 2021 general election.

He accused Alfred Sears KC, minister of works and utilities, who was not present in the House of “dereliction of duty” and the Prime Minister of “lack of oversight” in placing what he described as an entirely avoidable energy cost burden on Bahamian households and businesses.

Mr Pintard also threatened to, but ultimately backed away, from tabling in Parliament e-mail correspondence which he alleged showed the relevant Cabinet ministers and government officials were fully briefed on the consequences if the rolling series of BPL fuel purchases - known as call options or trades - were not executed within the narrow available timeframe to secure the extra volumes to support the initial hedge.

“On the BPL issue, one of two things has to be true if the Prime Minister was not aware of this matter,” the Opposition leader charged. “One, the member for Fort Charlotte [Mr Sears], which he did deny but we knew was aware of the hedging programme, which had saved $25m and over the life of the programme would save $55m. Without a shadow of a doubt he knew.”

Bacchus Rolle, parliamentary secretary in the Ministry of Works, intervened to argue it was “unfair” of Mr Pintard to assert what Mr Sears knew. Referring to a six-page letter sent to the latter on October 18, 2021, by ex-BPL chief executive, Whitney Heastie, laying out how the utility’s fuel hedging strategy functioned, Mr Rolle argued: “It was not an example of what we do over that or the next.”

The Prime Minister was then prompted to get involved after Mr Pintard returned to the Heastie letter. Echoing Mr Rolle, Philip Davis KC argued: “All that did was set out the circumstances about the hedging programme. If you just read the first paragraph of that letter, you’ll see what that letter is all about.

“There are no recommendations about what is to happen or not in relation to the hedging. It just sets out the circumstances in which the hedging was entered into, and the present condition and state of the fuel hedging programme.” Mr Pintard responded by reading out the paragraph identified by Mr Davis, which prompted a further intervention by the Prime Minister.

Pointing out that the letter was written just over a month after his administration took office, Mr Davis said: “It did not speak about any futuristic recommendations. It did not speak to any challenges.” Mr Pintard, though, referring to the e-mails that he did not table or release to the media, noted that Mr Rolle was among those copied in on discussions surrounding BPL’s fuel hedge.

The Opposition then suggested that the Prime Minister was “done a disservice” if he was not informed by either Mr Sears or Simon Wilson, the Ministry of Finance’s financial secretary, of discussions concerning an issue of such “gravity” that it had already saved BPL customers some $25m - a figure that was forecast to double.

The Heastie letter, tabled in the House by Mr Pintard a week ago, warned that “timely fuel hedges are executed” to ensure that BPL’s fuel charge is smoothed out and did not become volatile - just like it has now. It was headed “response to the financial secretary”, which indicates that Mr Wilson, the Ministry of Finance’s top official, had concerns over the BPL fuel hedge and how it was structured although these were not detailed in the document.

“The major intent of the programme is to smooth the peaks and valleys that the market is subject to over time and provide a stable and, if possible, a lower fuel charge to customers. The pricing of the fuel purchases is subject to market conditions,” the then-BPL chief executive wrote to Mr Sears.

He then explained why it was necessary to execute the rolling series of trades, known as call options, that had been structured to enable BPL to purchase fuel at advantageous prices. “To prevent large movement in the fuel charge, timely fuel hedges are executed. These periodic purchases provide ‘layering’ of the hedges that will result in a smoothing effect to the fuel charge to customers over time,” he wrote to Mr Sears.

“The execution of contracts is based on quotes obtained from the market by the IDB and passed on to BPL. The options have a strike price, and with each strike price is a corresponding premium that is paid, along with the transaction fee, to the IDB..... For the period August 1, 2020, to January 31, 2022, BPL has hedged just under 90 percent of its fuel at a strike price of $40 per barrel for a premium of $8.99 per barrel. In essence, we have locked in this fuel at $49 per barrel.”

The Davis administration and BPL have repeatedly said the initial fuel hedging structure, put in place by the IDB remains in place, which is correct. The December 2020 hedge covered a total 3.565m barrels of oil for BPL that were priced at $40 each and split into three tranches.

This transaction hedged 75 percent of BPL’s fuel needs for 2022, 50 percent of its requirements for 2023, and 25 percent of 2024’s needs via the IDB’s upfront hedge. These were were not hedged 100 percent because BPL needed to monitor global oil price movements so that it did not end up hedging at a price above market costs and thus end up losing money.

The Government, though, is not giving the full story. BPL was supposed to “backfill” the original IDB hedge by purchasing the extra fuel volumes to fully address its needs. This was to be done via the series of trades, known as call options, referred to by Mr Pintard that would have enabled BPL to obtain fuel - covering the 20 percent balance for 2022, 50 percent for 2023 and 75 percent for 2024 - at prices below then-prevailing oil market rates had they been executed.

It was these trades, scheduled to have been executed in tight windows in September 2021 and December 2021 just after the Davis administration took office, that were not carried out. As a result, BPL has increasingly been buying fuel at higher market rates with the fuel charge artificially held at 10.5 cents per kWh via the combination of government subsidies and $90m Shell non-payment. This can no longer be sustained, and consumers must pay up as a result.