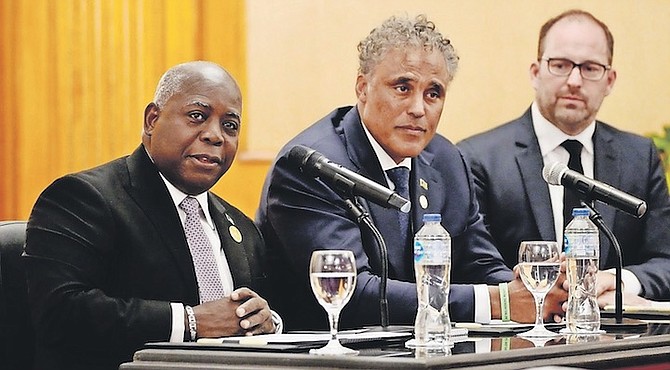 THE Davis administration is eyeing the development of the world’s first carbon-negative housing community as it seeks to mitigate the impacts of climate change disasters, three years after Hurricane Dorian ravaged Abaco and portions of Grand Bahama.

To do this, Prime Minister Philip “Brave” Davis announced that his administration signed a memorandum of understanding with Partanna, whose co-founder is Bahamian Rick Fox, a former Los Angeles Lakers basketball player.

The company is investing $50m into the Bahamian economy to establish its manufacturing plant in the country. Around 100 jobs will be provided to Bahamians during the course of the pilot phase of the project.

Mr Fox partnered with architect Sam Marshall, whose background is in hospitality, to develop what the prime minister described as “an exciting innovation in helping to reduce carbon”.

Mr Davis said the MoU will set The Bahamas on a path to sustainable, long-term adaptation in the face of climate change.

The first 30 affordable homes to be built with the new sustainable material are set for Abaco next year.

“I am pleased to announce today, a memorandum of understanding signed between Partanna and the government of The Bahamas,” Mr Davis said during a press conference on the sidelines of COP27, which is being held this year in Sharm-El-Sheikh, Egypt.

“The promise of the Partanna material is both an exciting innovation in helping to reduce carbon, and, for The Bahamas, also a path to sustainable,long-term adaptation in the face of climate change.

“Under the partnership, which I’m announcing today, Partanna will begin a pilot project to design, develop, finance and construct 30 affordable homes.”

Under the MoU, Mr Davis said Partanna must provide proof of verification for the carbon credits, which will be associated with their product in relation to the technology used in the construction of the homes. Each home is expected to generate 260 of the highest valued carbon credits on the market, Mr Davis said.

“Provided the verification process is successful, which I have no doubt it would be, over the following three years, we have committed that Partanna will increase that number to build 1,000 affordable, sustainable homes,” the prime minister also said.

“This arrangement satisfies two key priorities of my government: firstly, to provide affordable, sustainable housing in The Bahamas, and secondly, to meet the carbon priorities of the country.

“The government also wishes to create a new, carbon-negative building industry, which will generate new job opportunities and training for Bahamians. You would have seen on the video at the opening of this press conference the young men that he has working at the factory off Carmichael Road.

“Their investment of $50m into the Bahamian economy to establish the manufacturing plant is most welcome. We hope that this is just the beginning.

“Partanna has committed to providing employment for at least 100 Bahamians over the life of the pilot project. They will also provide training in the new skill sets required to create the foundation of this new global industry, which The Bahamas is leading.

“The Partanna technology is forecast to generate approximately 260 of the highest-valued carbon credits on the market, per home, paving the way for a sustainable future for The Bahamas.

“The company has also committed to enter into further negotiations with us, the government, to discuss the use of any carbon credits generated as a result of the pilot project and moving forward.

“Under this agreement, the dream of home ownership will soon become more of a reality for many Bahamians,” Mr Davis said.

Mr Fox at times became tearful as he spoke of the devastation left behind by Hurricane Dorian, which was ultimately the inspiration for Partanna. He was also moved to tears as he spoke of trying to save the world from climate change.

“We’re in the hot zone, we’re in the front line,” Mr Fox said yesterday. “Together Sam and I got to work and we developed a technology that has the potential to change the way we build in the world.

“We need to build better. We need to delink development from pollution. Partanna provides the opportunity for us to do that, for us to build in a more nature-positive way.

“We use recycled materials which allows it to be carbon negative over its life cycle. Our technology is affordable, scalable and completely sustainable and for people living in countries like my country, homes can be built using Partanna and can create hurricane resilient regenerative homes because our products get stronger when we’re exposed to seawater.

“Now think about that? In a world where rising sea levels are a fact, when I walk the beach at Montagu Beach that my dad walked every morning, I don’t see the same beach. Sea levels are rising.

“By 2100, two billion people will be refugees from rising sea levels. So, when you’re building structures in our case where we’re surrounded by water, you better believe that our structures better meet nature’s elements and in our case get stronger,” Mr Fox said.