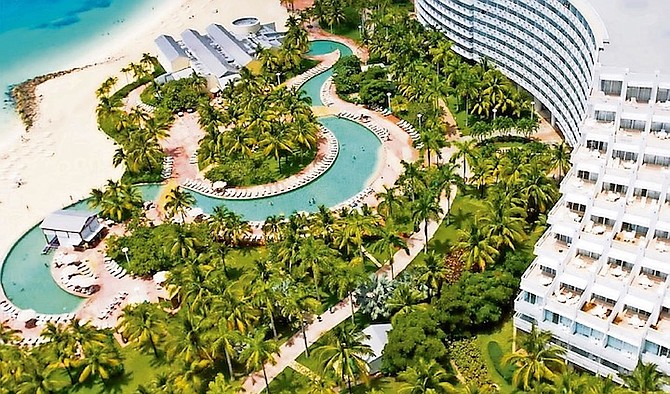 • Resort board ‘in active talks’ with new buyer

The Grand Lucayan’s former chairman last night said “I told you so” after the Government admitted the resort’s $100m sale has collapsed and it is now seeking an alternative purchaser.

Michael Scott, who headed Lucayan Renewal Holdings under the former Minnis administration, told Tribune Business he had been informed several weeks ago that the deal with Electra America Hospitality Group was in trouble as its current Board begins “active discussions” with an unnamed replacement.

He accused the Davis administration of making the same mistake as its predecessor, which he served, by effectively putting the cart before the horse and failing to address the Dorian-devastated Grand Bahama International Airport with more than a “band aid” solution.

Asserting that regaining US pre-clearance status was key, given the need to deliver sufficient stopover visitors to guarantee the Grand Lucayan buyer a return on their investment, Mr Scott told this newspaper that “nobody is going to invest $250m (or $300m as Electra America had promised) unless they have an assurance on the airport”.

Julian Russell, the Grand Lucayan’s current chairman, promised to call back when contacted by Tribune Business but never did before press time last night. However, in a statement, Lucayan Renewal Holdings said Electra America had blamed difficulties in obtaining the required financing for its failure to bring negotiations to a conclusion and complete the deal.

The buyer, according to the special purpose vehicle (SPV) that holds the resort on the Government’s behalf, said the prospective buyer had attributed its woes to a combination of tightened debt/credit markets and rising construction costs sparked by global inflation. As a result, the financing it would have to raise - and pay back - has increased beyond original estimates since it signed the Memorandum of Understanding (MoU) with the Government back in May.

“Electra America has advised that shifting global capital markets and related inflationary pressures resulted in higher construction costs and costlier access to credit,” Lucayan Renewal Holdings said. “Accordingly, the company had difficulty securing development financing at terms that would allow it to fully execute the vision outlined in its business plan.

“Given this, the closing deadline of November 15, 2022, is not possible and negotiations with Electra America have come to an end.” The announcement effectively means the search for a buyer who can revive Freeport and Grand Bahama’s ‘anchor’ resort property, and by extension its tourism product - especially the adjacent Port Lucaya Marketplace - continues having been sent back to square one.

In reality, the Electra America deal had been in difficulty for some time. The group received no less than four extensions to the initial 60-day due diligence period that was supposed to first expire at the end of June, with the last taking it to mid-November, and there were no answers to questions on whether the required $5m deposit had been paid.

The timing of the release, coming one week before the latest November 15 deadline expires, and with sub-tropical storm Nicole heading Grand Bahama’s way, suggests the Government was possibly hoping to bury or mitigate the impact of bad news with attention focused elsewhere. The $150m spent by the taxpayer to-date on maintaining and keeping the Grand Lucayan open, including the $65m purchase price, is now set to increase further.

However, seeking to offer Grand Bahama hope, Lucayan Renewal Holdings added: “The Board is currently in active discussions with a well-capitalised entity that has expressed its interest in acquiring the Grand Lucayan Resort. The entity has a vision for the property, and a track record of having recently completed notable transactions in the hospitality space.”

Adding that the potential buyer has been vetted by Colliers International, the global real estate firm hired to manage the Grand Lucayan’s sale, it added: “The Board of Lucayan Renewal Holdings remains committed to ensuring that a credible plan and shared vision for the Grand Lucayan is realised - a plan that will provide jobs, entrepreneurial opportunities and strengthen Grand Bahama’s economy in the best interest of the people of Grand Bahama and the entire Bahamas.

“In the meantime we will complete functional renovations to the Lighthouse Pointe buildings. We are also working with airline partners and the Ministry of Tourism to derive tangible benefits from the significantly increased airlift to Grand Bahama.

“We welcome opportunities with Bahamasair from Raleigh, North Carolina, and Florida; American Airlines from Florida and Charlotte, as well as Sunwing from Montreal and Toronto. With this boost, Lighthouse Point is forecasting steady occupancy levels and continues to employ approximately 140 Bahamians.”

One source, speaking on condition of anonymity, suggested the Electra America deal had been “dead” for some time but the Government was reluctant to confirm this because it would have set off “a political firestorm”.

“I think the Prime Minister has taken this over personally,” they said of the Grand Lucayan buyer search, “and sent a special emissary to two casino groups. I don’t think that emissary would have been greeted or invited if they weren’t serious.” The source added that one of the casino groups was Hard Rock.

Mr Scott, meanwhile, said of the Electra America deal’s collapse: “I predicted it and it happened. From a government perspective, these guys are making the same mistake my guys made. You have to start at the bottom and work your way up. If you don’t have the infrastructure, all the posturing and press releases and announcements are just verbiage.

“You have to start with the airport. Nobody is going to commit $250m to an investment unless they have an assurance on the airport. They have no way of recouping the capital outlay of their investment let alone the interest and a return by way of net income. It’s not going to happen.

“When I say ‘fix the airport’ I’m not talking about a band aid. The message isn’t getting through. I thought I did a reasonable job in conveying to them what the problems were but that went straight in one ear and out the other.”

Mr Scott said the Minnis administration had been heavily criticised for its decision to purchase the Grand Lucayan for $65m from Hutchison Whampoa’s real estate arm in September 2018 - a move that was designed to prevent its closure and stop Freeport from suffering a second Royal Oasis.

“I have always been consistent in my position. I’ve said it repeatedly, said it to them and will say it again,” he added. “You have to deal with the infrastructure. It’s critical. There aren’t enough revenue sources from day trippers from Miami and West Palm Beach, nor can you utilise the airport as it exists with a band aid because you will never get pre-clearance back. That’s the key to the whole thing.”

Time for some resignations. More s..t to hit the fan soon. Ask Rothschild.

Yep, it would have been better to put $65m in the island infrastructure. This is the role of government. Buying dilapidated hotels on the other hand is not what the government is supposed to do, but we never learn...

Is anyone really surprised. I am never surprised at the Government's ability to screw things up!!

The FNM Government is the great big fool in this. Why did they buy that hotel it made no sense FNM nonsense from the get-go. there used to be Holiday Inn the Atlantic beach and the Lucayan beach. the FNM papa made the deal to make them no more,

Agreed. The FNM messed up big time on this. They were crazy to even consider putting money into a run down hotel. Maybe $10 million but no more than that.

See what I did there Birdie? I agreed with something bad without comparing it to something another party did way back when.

EAHG raised $500M last spring and quickly acquired new properties for development, the Lucayan Resort purchase obviously was never a front runner. And since Davis & Co already had their headline and a scapegoat when the deal failed due to the empty promises about a new airport…

No money for infrastructure, no money to pay nurses, yet there’s no end to that available for pigs at the teat. There’s 70 a-swilling at the latest hog fest in Egypt right?

The problem lies at the feet of Hutchinson-Whampoa and GBPA ......... these two lousy entities are trying to squeeze the Government to take on assets in GB that they do not want to carry on their asset/liability portfolio .......... Now both FNM & PLP are left holding the hotel & airport bag.

There is no good end in sight for this fiasco ........... two white elephants and no investors.

@Comrade SheepRunner12, not earnest ask of just any someone just strollin' 'on by.
Why in the dickens, did it come about for the Red Party's governance administration, has overpaid $65 millions for a hurricane damaged hotel in the first place?
Shouldn't it have been a more accessible easy ask of your own out island's, still** a House-seated, certified Pintard member ― Yes?

Well to be fair they did say the deal would close in October. They didn't say what year.