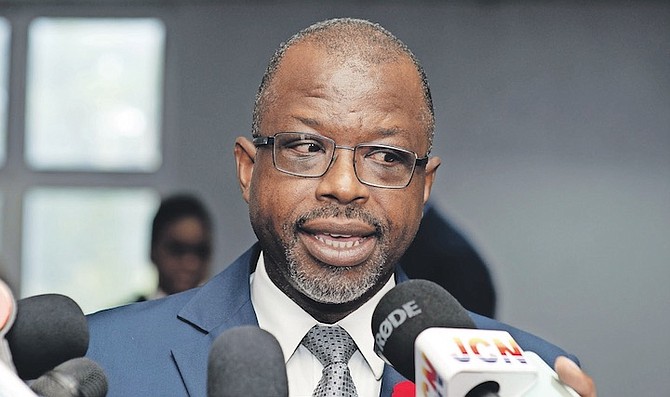 NATIONAL Security Minister Wayne Munroe said the director of public prosecutions has agreed to have someone marshal bail revocations in the Supreme Court with lawyers from the commissioner of police’s office so that there can be a more “aggressive” process.

Last week, Mr Munroe said officials were not satisfied with the DPP’s management of his office. He had also said previously that officials are concerned about the number of people committing offences while they are on bail and being electronically monitored.

While speaking on the sidelines of an event yesterday at police headquarters, Mr Munroe was asked about the penalties regarding bail breaches.

He replied: “The point we made is if you breach the terms of the bail, particularly regarding electronic monitoring, the position that the commissioner puts to me which I agree with is you shouldn’t be put back on bail. So there’s a fine now for breaching your bail condition but committing an offence while on bail, it’s a reason to revoke bail.

The minister later alluded to the meeting with the DPP.

“We had a productive meeting with the DPP and his officers. The DPP has agreed that Chief Superintendent Roger Thompson, who was a lawyer of 14 years standing who was in the commissioner’s legal office, can marshal these bail revocations in the Supreme Court with lawyers who we have in the commissioner’s office so that there can be a more aggressive process.

“For once you are convicted, once you’ve (been) dealt with for bail violations, we can then go to the Supreme Court get your bail revoked. There’s a presumption of innocence, fine, but if you’re not obeying the rules then you forfeit your privilege of being on bail.”

Several people on bail have been arrested and charged for not adhering to curfew conditions. In other instances, it has been reported that the batteries of their electronic monitors have intentionally been allowed to die; there have been cases where some people have removed the devices from their bodies.

In September, Police Commissioner Clayton Fernander said 38 people had been charged with breaching bail conditions. Several more have been charged since then.

In response to the criticism from Mr Munroe last week, Garvin Gaskin said he and his team at the DPP’s office will continue to “press for the due advancement of the criminal justice system”. He added that he had only recently returned in September from seven months’ vacation leave, but was looking forward to “appropriately addressing” any “deficiencies” in the legal and law enforcement systems.