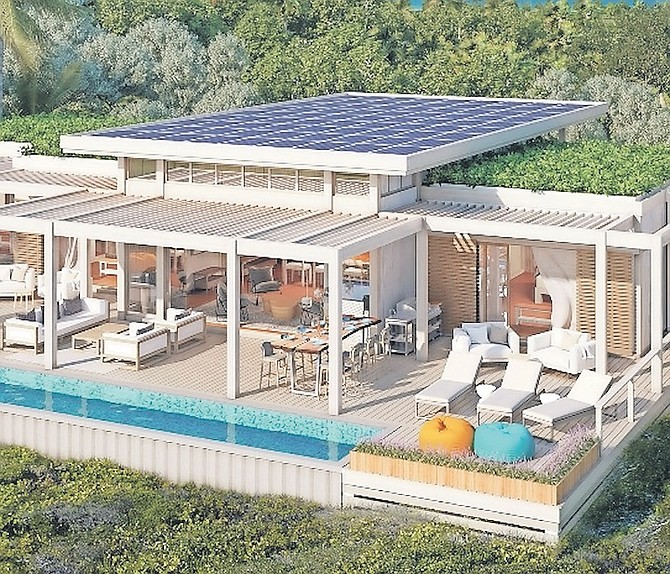 • Ki’ama Bahamas to create up to 85 full-time jobs

A $73m investment is aiming to attract 36,000 guests per year at full build-out of a “zero carbon” residential and yacht community on an Exuma cay located just three miles from Georgetown.

The Ki’ama Bahamas project, in an Environmental Impact Assessment (EIA) viewed by Tribune Business, said its plans to develop a 36-acre community on the southern third of Elizabeth Island will create permanent employment for 80-85 Bahamians as well as 45-60 local jobs during the three to four-year construction period.

Describing their vision for a “first-class, fully sustainable, zero carbon, solar-powered residence and yacht community”, the developer consortium said: “Resort guests and owners will have the ability to enjoy the world’s most pristine and undiscovered destinations without negatively impacting the environment.....

“Ki’ama Bahamas’ project construction timeline is anticipated to be up to five years. Total development costs are anticipated to be up to $73m. At full build, the project anticipates annually accommodating up to 36,000 guests spanning nearly 10,000 occupied room nights, or a projection of nearly 5,000 round trips to The Bahamas. The annual guest projection equates to roughly 100 average guests per day on both land and sea.

“Even if all guests were on land, this would equate to approximately three guests per acre. Despite the low-density nature of the project’s occupancy, to mitigate potential impact to the environment during operations by utilising electric golf carts, restriction of single-use plastics, significant way-finding signage to ensure guests remain on gravel roads or established trails, and abundant waste and recycling receptacles reducing potential litter.”

Research by Tribune Business revealed that the Ki’ama Bahamas development is a joint venture between three entities who have formed Ecoisland Development. They are Mauritius-headquartered Silent Resorts, billed as “the world’s first integrated land/sea, ultra-sustainable, private, secure, 100 percent solar-powered, luxury and adventure brand”, together with Equity Residences, a real estate investment fund, and Elite Alliance, a residence club owner.

Silent Resorts, whose chief executive and founder, Victor Barrett, appears to be the Elizabeth Island project lead, states on its website that it has selected Exuma and The Bahamas to host the prototype for its “new model of sustainable development” that includes fully solar-powered yachts.

The development was referenced recently by Chester Cooper, deputy prime minister, who has responsibility for investments, during the recent Exuma Business Outlook conference when he said: “On Elizabeth Island, there is a unique zero carbon integrated residential resort and yacht community over 35 acres.” The developer, he added, plans to build 28 “low impact”, solar powered residences varying in size from three bedrooms to six bedrooms.

The disclosure of Ki’ama Bahamas EIA, ahead of a November 29, 2022, public consultation on the document and wider project shows it is now ready to apply for - and obtain - the Certificate of Environmental Clearance (CEC) required from the Department of Environmental Planning and Protection (DEPP).

The report confirms that the developers plan to construct between 22 to 28 solar powered residences, which will have shared and individual ownership, via “carbon negative” building techniques that will use hardwood timber and bamboo derived from “sustainable resources”. A beach club, including a fitness centre and restaurant/bar area, will also be developed and there is to be no dredging of the marine environment.

While the EIA veers between different job creation figures, promising 80-85 full-time posts upfront and 45 to 60 construction jobs, only to reduce the former to “up to 50” two pages later, this could just reflect the variation between direct and indirect employment that is spurred.

Promising that only 18 percent of the property will be developed, and that more than 80 percent will retain its existing natural vegetation, the EIA said: “The existing project design and engineering team is entirely Bahamian and spans multiple firms and disciplines.

“Given the advanced sustainability of the project, the development team anticipates significant training opportunities for Bahamian talent in the fields of modular construction, solar power, desalination, water purification and electric boat operation and maintenance. These advancements are at the forefront of hospitality development trends and demand for these skills is only set to increase.....

“Such a scale of investment is expected to contribute to the revitalisation of the Exumas as one of the world’s top touristic destinations as a place for vacation, but also a conduit for economic growth and development. The project with its investment of some $73m is expected to generate much need economic stimulus for the Exumas. The project benefits far outweigh any limited unavoidable negative environmental impact identified.”

Ki’ama Bahamas sits squarely within the boundaries of the Mariah Harbour Cay National Park. The EIA discloses that the developers presented their proposal to the Bahamas National Trust (BNT) on August 8, 2022, since its backing is vital given the location.

The Trust was described as “supportive of the project”, although the attached October 18, 2022, letter by its executive director, Eric Carey, stopped short of being an unconditional endorsement. “If the developer adheres to the design as presented, the resort as proposed may be compatible with the management objectives of the Mariah Harbour Cay National Park,” he wrote.

“If your stated development objectives are achieved, and the sustainable standards maintained, it is not inconceivable that Ki’ama Resorts could indeed serve as a replicable model for development within, adjacent or within close proximity to national parks.”

Mr Carey said the developers would need to obtain the Trust’s permission for any activities that could impact the marine environment around Elizabeth Island, since it manages the waters, while they would also have to obtain permits from it and the DEPP for any research or environmental monitoring that is conducted. The Trust chief executive also promised that it will review and comment on the EIA.

The developers, meanwhile, pledged in the EIA: “The project anticipates providing up to $1.2Mm in funding to Silent Catch, a non-profit organisation focused on advancing sustainable fishing practices that is to be headquartered in the Bahamas. The phase one start-up funding of Silent Catch will be $150,000.00.

“The organisation will empower and train the local artisanal fishing community and local organisations to implement electric motors and solar charging, thereby reducing the cost of local fishing and environmentally harmful externalities inherent to the practice. For example, this organisation could work alongside the Bahamas National Trust team representing the Mariah Harbour Cay National Park (MHCNP) to benefit the local fishing fleet in the area.”

Compared to this Our Lucaya is real.

I wondered. I have the same assessment as Eric Carey. If they do what they say, this is exactly the way we want to develop the family islands. The key here is not to trust them.

We saw the depths construction crews will go to from the Bahamar internal emails. The key here is to monitor every nail, block and timber put into this property. But I have yet to see our ministry of works, politicians, govt officials, and lawyers be uncorruptible. Some of them are the classic biblical prostitute, they will do anything for money.

It dont matter how the Bahamar engineer intends to cheat, the inspector should catch it. It dont matter how many immigrants decide they gonna build against code or hook up utilities illegally, the inspector should catch it. the fact that Bahamar completed and that we have 200 acres of illegally connected utilities tells you some worker was corrupted and someone at the tippity top of everything was paid off to ignore it

In my crime fiction book, the person at the top never gets their hands dirty. They dont even know how the money comes in, all they see is a section on their 2nd set of books called "Other activities" where all the income from the kickbacks and shingles purchase is listed. The "Man of Business" handles all the details, he's right next to the lead man but you never see or hear him he's in the backroom cutting deals. If he gets caught he can say things like "if I have to resign or go to jail, everybody going to jail". Cause he know everything and he know every party does it. . "When you in charge its your turn when I in charge its my turn". So nobody ever goes to jail and the Bananas continues to crumble. Its a great book of fiction.