INSIGHT: Fyre, FTX and the harm to our nation

BILLY MCFARLAND who was convicted of fraud after the Fyre Festival.

A YOUNG entrepreneur, out of his depth, losing a ton of money and injuring the reputation of The Bahamas along the way.

I could be talking about Sam Bankman-Fried, whose company FTX has combusted so spectacularly in the past week or so – and I will – but let’s take a trip to the past first.

Remember the Fyre Festival? It was the most talked about festival of 2017 – but not in a good way.

Created by Billy McFarland, a young, white businessman, and rapper Ja Rule, it was to be one of the most luxurious festivals ever created – where you could hang out with supermodels in Exuma while enjoying some of the top musical talent in the world.

The event was promoted by social media influencers such as Kendall Jenner, Bella Hadid and Emily Ratajkowski – who were paid to promote it.

But the event itself was a disaster. Without proper organisation of security, food, accommodation or even ensuring the artists and models who were promised would actually appear, the whole thing failed so spectacularly that both Netflix and Hulu vied with one another to tell the story with separate documentaries.

At the time, then Tourism Minister Obie Wilchcombe said that the government “did all the right things” and claimed: “Up to the very last minute no one really knew the level to which the matter had fallen apart. I don’t think we should lose sight of the fact that at all times, The Bahamas did what it was supposed to do.”

It was never clear what the Ministry of Tourism had actually done to determine whether or not the island could host an event the size of Fyre Festival – even down to such things as toilet facilities for such a venue.

In fact, misgivings about the event had been raised online for some time – but it didn’t matter. Visitors arrived in Exuma to find themselves with nowhere to stay and little to eat. A much-circulated picture of a meagre sandwich was an enduring image of a festival that promised so much and failed so badly. Fyre Festival became a byword for failure the world over.

As for those documentaries, Mr Wilchcombe said he had no interest in watching them, saying: “I don’t waste time.”

He added that the event “didn’t cost The Bahamas anything” even though there was a swathe of unpaid local vendors after the festival collapsed.

Mr McFarland pleaded guilty to two counts of wire fraud in court in Manhattan, and admitted using fake documents to attract investors to put more than $26m into his company. He was jailed for six years, but released early to house arrest, which ended in September this year.

The scale of the funds lost in the Fyre Festival venture pales into insignificance when compared to what happened with FTX in the past week.

FTX rolled into The Bahamas to set up its headquarters, and in a flurry of donations, ingratiated itself with the business and non-profit community.

The company talked big, its founder Sam Bankman-Fried was a star in the cryptocurrency community, and the government talked about getting FTX to help with its plans for carbon credits trading.

All that came burning down last week.

It started on Wednesday of the previous week, when a story on the news service CoinDesk raised concerns about the risk to FTX’s cryptocurrency’s value because a sister company to FTX held billions of dollars of that currency, FTT, on its balance sheet and was using it to secure loans. That company, Alameda, is run by Sam Bankman-Fried’s girlfriend, Caroline Ellison. First, rival company Binance said it would be pulling its investments in FTT, and then a run of investors withdrawing their funds showed a major problem with FTX’s available funds. It stopped withdrawals, and promptly started to collapse.

In a few days, Mr Bankman-Fried lost $17bn from his fortune. The whole affair has been called the biggest one-day collapse of personal wealth ever, by Bloomberg.

Mr Bankman-Fried apologised to employees and on Twitter, saying “I f---ed up, and should have done better”.

He blamed “poor internal labelling” but the amount being talked about was a sum of $10bn. I don’t know about you but I’m careful when sending a couple of hundred dollars to family online – moving $10bn ought to be beyond poor labelling being a risk.

On Thursday, The Bahamas announced FTX assets were being frozen. On Friday, FTX filed for Chapter 11 bankruptcy protection in the US, also including the US version of FTX and Alameda. Mr Bankman-Fried was out as CEO. 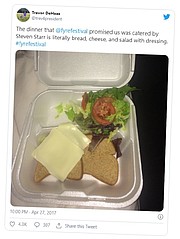 THE FAMOUS image of the sandwiches being served at the Fyre Festival.

Some questions were raised about a brief window when trading reopened on FTX but for The Bahamas only – but the collapse has prompted a number of investigations. It’s hard to see how this ends anywhere except in a courtroom.

So there we have two young investors – both aged 30 – presiding over financial disasters. In the second case, it’s hard to see exactly what The Bahamas could have done to stop the collapse – that was driven by a combination of unsound practices and outside pressure – but in both cases, our nation’s name is featured in news reports around the world associated with these actions.

And as ever there will be questions about how we are choosing who we do business with. Sometimes that’s unknowable – but here’s the thing, sometimes it is knowable.

For example, just as FTX was collapsing last week, Mr Fyre Festival himself, Billy McFarland, was starting to promote a new venture to take place right back here in The Bahamas again.

He released a TikTok video last month saying “the moment is right to start making this up to everybody”. He said: “I’m working on something new. This time, it’s a little crazier, but a whole lot bigger than anything I’ve ever tried before.”

It turns out, that’s a treasure hunt called PYRT, in Exuma. He has been on a redemption tour of the media in the US – where his customers are – but not here in The Bahamas – where those unpaid vendors are.

It does make me think back to during the pandemic, when a boy selling coconut water by the side of the road was arrested and ended up in court. How does someone break the law on the scale of rich white entrepreneur Billy McFarland – and still get to come back and set up shop in our nation again? Who gives him permits? How is allowed to operate here again? The comparison with how people like him are treated compared to how the poorest of our own nation are treated tells its own story.

Did anyone ask if the FTX kids all received Bahamas citizenship? Would PM confirm or deny?

That would be an infringement of the constitution if they did. Currently no law allows citizenship to be sold.

Where have you been? or maybe youre hung up on citizenship as opposed to residency

Comrades, what we've long known but wouldn't admit to, so as to prepare for the day exposure will reach and as to the degree of which never before was experienced by any other colony's generation in its 308 years of governances history is the extent weakness of resilience that crosses over into all political cultures**--- on selling of our souls to 'foreigner' peoples' money' (FPM).

Lesson once again learned why it's high time to write into constitution the 'clamping down on the signing-over' of our colony's parcels of lands and private islands to revolving sets of Foreigners.

Like Columbus and Wallace Groves, they come short while and leave to seek out other Homelands.

It's not our King Charles 111 that decreed why the price of a small parcel of his colony's land should cost you a royal fortune — Yes?

Comrade TalRussell - please improve the readability of your posts. You often share nuggets of insightful knowledge but I don't have the time or competence to decipher all of your messages.

The average audience of your posts reads mainstream US and UK English.

Also, what is your writing style derivative of? I find it curious and would like to learn more.

The photo of Sam Bankman-Fried leading our PM on a tour of FTX facilities is priceless.