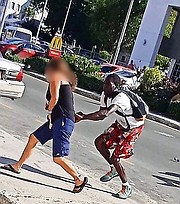 PHOTOS from social media of a man snatching a tourist’s purse yesterday. 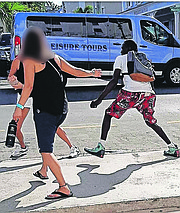 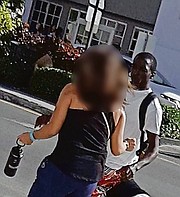 The incident took place on Bay Street, near McDonald’s.

In the photos circulating on social media, a man is seen approaching two people and snatching a woman’s purse. The woman fell to the ground during the incident.

When asked by reporters about this matter, police press liaison officer Chief Superintendent Chrislyn Skippings told reporters on the sideline of an event that police are actively investigating.

She could not confirm social media reports that the suspect was in custody.

“I don’t have that information, but it has been brought to our attention, and we’re actively right now trying to reach out to the station to find out whether or not it is the case,” she said.

Scores of Bahamians took to social media to condemn the matter.

Worse than ashamed, I feel sad. For a country that has had so much promise and so many opportunities? The only thing that will come out of this domestically is more excuses. As Christmas approaches, as inflation rises, as our government continues to dawdle on the important issues, we will witness this trend toward lawlessness. Tourists being shot on the Family Islands. Robbed at gunpoint in Nassau. More pontificating to the clueless by the Christian ministers. Higher and higher prices for tourists and residents alike. Our politicians are just like the same grabby ones who came before. Almost seems like we don't want those who contribute the 80% to our GDP to come here. Those of us who may be paying attention see clearly the nationwide implications of our poor attitudes. What government worker thinks they will have a job when our tourist sector collapses? What government official boasting about VAT revenues thinks we are looking at a positive trend here? Are we all fools?

This is disgusting, imagine the perverseness to have to prey on women because you can't get your own money. They need to share this on social media.

Umm, I think that was made clear in the short article above.

Ok, but knowing this country and the slackness that's so wide spread nothing tangible might come of it. We'll forget and carry on normally by the morrow.

What's most embarrassing is no police were around, hotel employees stopped and held the man until police came.

I'm just guessing but he's probably out on bail. I'll look for him today as I'm sure he's out there looking to do the same thing all over again.

Now we know why the US Embassy continues to give warnings to Americans who plan to visit. It is because of matters like this. As Bahamians most of us think crime is only an over-the-hill issue. This shows we are wrong. The criminals target all and sundry. Tourists are no different.

Out on bail???? Not if they beat him bad enough, oh, I forgot, we is a “Christian” nation and don’t practice corporal punishment, my bad.

We all know by now that when the Police say they are “actively investigating” a matter this is merely a convenient response to deflect from the fact that they are in reality doing NOTHING … how many times have you made a Complaint and filed a Report and literally heard NOTHING … even after repeated follow-ups?!?

Bey forget the Police, where the Bahamians were? You gonna stand by and let this bey rob and harass tourists in front of you? Those that are keeping this shaky nation afloat? Muddoes. Should have been 10 Bahamians beating that jonser into the ground. I only hope that guy is not a Bahamian, though it doesn't make the act any less infuriating. Attacking tourists is an attack on the Bahamian economy.

No wonder they tell the tourists to stay on the ship. Bay Street looks abandoned with all the boarded up buildings and disrepair, now it's got the brazen crime to go with it, no idea why tourists even walk those streets, I know I don't.

A homeless Man stabbed a tourist in Hollywood with a pair of gardening shears, another homeless man stabs a woman and boy in a Target store in Los Angles, s Virginia college student and former football player shoots and kills three other football players and wounds others. Two fellow college students and residents of a college residence in Idaho are being questioned by police after four college of the same residence found stabbed to death… and a mass shooting somewhere across almost every week. This country looking to set s new record in murders or, at least break the number set last year.. what’s going on? The violence, the desire to maime if kill.. why Over 27 police recruits plowed down by a vehicle going the wrong way on a street and st least five in critical condition. Some liken the scene to a plane crash with bodies and injuries everywhere. Some call it post Covid stress and some say it’s just the beginning as the effects of long Covid will also set in.., the world gone mad.