Champions crowned in the BAISS 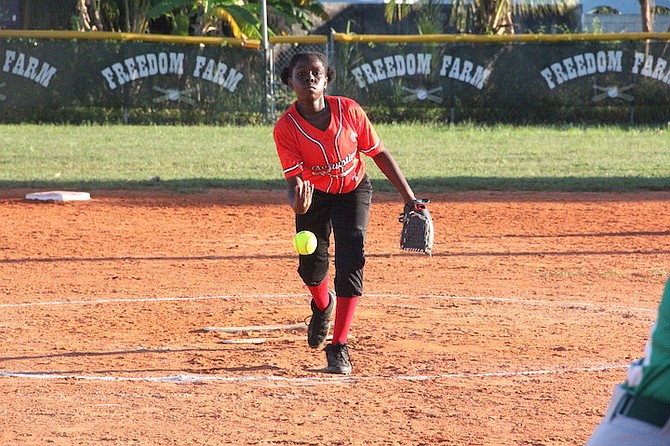 SAC pitcher Ashleigh Forbes got the win on the mound for the Big Red Machine junior girls with three strikeouts.

The Comets concluded the series and the season with a 15-9 win over the Temple Christian Suns. They took game one 11-8.

“We had no doubts all season long that we had the best team in the division, both offensively and defensively,” said Comets head coach Julian Kemp. “I’d like to thank God for giving these boys the talent and the work ethic to continue on all season. This was our only loss of the year against St Augustine’s so it means a lot to us.”

A high scoring Comets’ offence was led by Ajay Knowles, Ethan North and Evon Johnson who all went 3-4 and scored two runs each.

The Comets scored three runs in the first inning and broke the game open with a five-run second. They eventually took a 10-0 lead before the Comets got on the scoreboard.

“We came out ready to hit the ball today,” Knowles said. “We jumped on them early and we never stopped.”

North added: “We have a lot of great hitters and they really came to play today. It’s a good feeling, we worked very hard to get here.”

Kamaii Knowles was the winning pitcher.

The Suns’ offence was led by starting pitcher Stanaz Seymour who finished 2-3 with two home runs and four RBI.

After a high scoring 23-19 win in game one, the Big Red Machine junior girls closed out the Comets 15-9 in game two.

The Comets had an early 7-3 lead before the Big Red Machine rallied to score 10 runs across the fourth and fifth innings.

Ashleigh Forbes got the win on the mound for the Big Red Machine with three strikeouts.

In senior girls’ play, the Nassau Christian Academy Crusaders completed an undefeated season with a 4-3 win over the Comets.

Apryl Davis was dominant on the mound with seven strikeouts to lead the Crusaders to the win.

Crusaders manager Donna Brown said the win was influential for the programme and the impact it can have on school spirit.

“It means a lot because it boosted their spirit. Most of these girls haven’t played since COVID really started so when we knew we were going to play this year everyone came out,” she said. “I had like 50 kids come out to try out and we just kept working and working until we had the best possible team.”

The Crusaders took a 14-10 win in game one but didn’t score the go ahead run until the fifth inning in a closely contested game two.

“It was unity. They fought hard and they all came together. We have a great pitcher but even when she got hit, the defence behind her was ready to make plays,” Brown said. As for the sustainability of the programme: “We only have two players that are leaving,” she said. “The rest of them will still be here so we expect to be back next year.”

In senior boys’ play, the Big Red Machine forced a third and deciding game in the series with a 19-18 win in game two last night.

SAC squandered an 11-5 lead and the Crusaders rallied to eventually take control, 18-17 in the top half of the seventh inning.

With the score tied at 18 in the bottom of the seventh, Cedric Duvalier delivered a two-out walk off single to keep the Big Red Machine season alive.

In the highest scoring series in all divisions, the Crusaders took game one 26-11.

Game three is set for 4pm Friday at the Freedom Farm Baseball Complex in Yamacraw.