‘I know what it takes to run the association’ 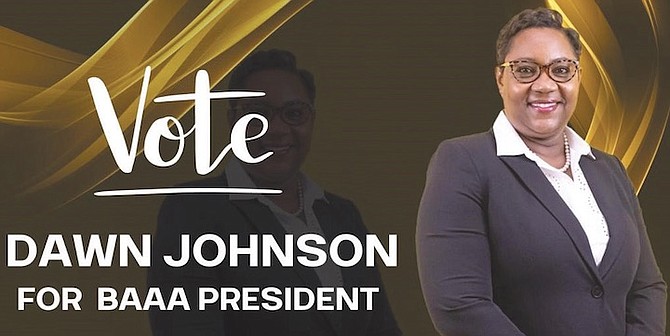 WITH a mandate to change the mindset of the athletes and coaches and to develop a programme to revitalise the sport of track and field, Dawn Woodside- Johnson has revealed her platform she’s campaigning on to become the new president of the Bahamas Association of Athletic Associations.

Woodside-Johnson, a former athlete, coach and executive, is hoping the delegates would give her a chance to take over the helm rather than returning it in the hands of incumbent president Drumeco Archer and immediate past president Rosamunde Carey.

With her campaign now in full gear, Woodside- Johnson is confident that she secures sufficient votes during the annual general meeting and election of officers on Saturday, December 3 at the Thomas A Robinson National Stadium.

“They’ve had two presidents who served running again, so why not give me a chance as a new candidate running to become president,” Woodside-Johnson said.

“I’m a former athlete, who became a coach and then served as an executive and a manager. So I know what it takes to run the association.”

Woodside-Johnson said while they saw the need for change because she felt the BAAA was not heading in the right direction, she’s pleased to see that the association is putting some emphasis on making sure that they get the job done.

“I’ve grown up around track and I’ve seen how the BAAA is operated in the past and so I said if not me, why not me,” she said.

“I’ve been around track for a long time and I know what the athletes need, having served in all areas of the sport. So why not run to become the president.”

If elected, Woodside- Johnson said she intends to bring good governance, make the association more accountable and to make sure the members are all educated on the constitution.

“At some point during the next administration, the constitution has to be revamped and revised in order to bring it in alignment with NACAC and World Athletics and to make sure that the constitution enables us to engage all of those persons living on the various islands in our archipelago.

“We also need to rebrand the BAAA in terms of being able to finance the association by ensuring that corporate Bahamas is on board with us, so we won’t just be going on trips, but we try to bridge the gap between those athletes graduating from college and making the transition to being pro athletes.”

This has been one of the biggest downfalls for the BAAA in recent times as Woodside-Johnson said it’s evident in the fact that the Bahamas has failed over the past few years to field relay teams in both the men and women divisions as they’ve been in the past.

“We can’t field the teams because we lose those athletes in between college and the pro ranks,” she said. “They are making the decision between whether they will enter the job market or they continue to pursue their track careers,” Woodside-Johnson said.

“We need to provide some type of funding to assist the athletes who are on the borderline and we have to make sure that, not only the executives, but both the athletes and the coaches are kept abreast of what’s happening in the BAAA, NACAC and World Athletics.”

When the membership are invited in the decision making of the BAAA, Woodside-Johnson said they will feel more a part of the organisation and they will be more willing to do more, rather than always complaining.

While she’s not proposing a slate of officers to work with her, Woodside-Johnson said she has identified some persons to assist her, including an accountant to ensure that the BAAA is operating properly and a marketing and public relations officer in Tanya Woodside.

“We are finding out that the members don’t want to concentrate on slates during this election,” Woodside-Johnson said.

“They want to choose the best candidates and put them in their positions so we can function the way we should.”

With the countdown on the elections, Woodside-Johnson said her campaign is going quite well and she’s looking forward to a favourable result on election day.

“Campaign is going pretty good. It’s going to be a tough one,” she said. “You have three persons running for president. But as the new person running for president, hopefully the membership will elect me to bring about the change. “Having served in just about every category in the organisation, I want the membership to have the confidence in me to know that I am for change and I want the BAAA to get to another level from where it is on.”

Her aim is to enable the BAAA to develop a culture of liability and trustworthiness for their members as they put their confidence in the executive team elected to serve for the next four years.

“We also want to safeguard the workshops that coaches should have been well engaged in the sessions by 2023.

“The coaches need to learn about harassments, exploitations and abuse,” she said.

“So all coaches will have to go through this safe-guarding workshop to ensure that their athletes are safe and that they provide a safe environment for them.

“We don’t just want for our coaches, but our athletes as well on their nutrition and all these good things because coaches can’t do everything.”

She said the athlete has to do their part in terms of eating and sleeping to secure their athletic scholarships to college.