Pintard calls for Sears to resign 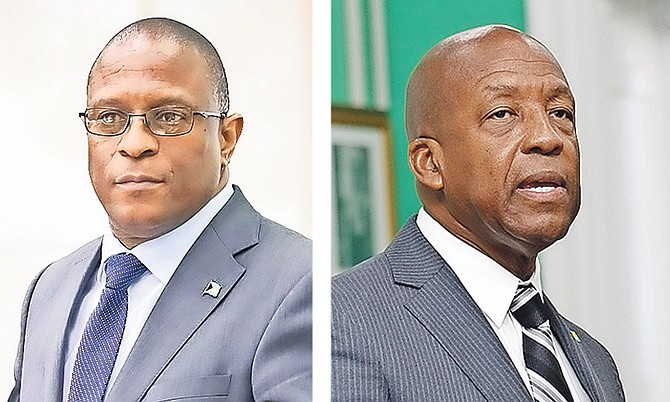 FREE National Movement leader Michael Pintard on Friday called for Works and Utilities Minister Alfred Sears to resign, pointing to what he called a “failure of the government to act appropriately to reduce the cost of electricity”.

Mr Pintard made the remarks outside the Office of The Prime Minister (OPM) where he led a press conference in the parking lot surrounded by more than 20 party members, including FNM Chairman Dr Duane Sands. An equal number of police officers, who had blockaded the parking lot and cut off the access to the front lawn of the building, were also present.

After urging ministers at Parliament on Wednesday to admit to the public that they received recommendations on how to avoid a 163 percent increase in BPL’s fuel surcharge for consumers, Mr Pintard continued to press the issue outside the OPM.

“The Minister of Works and the Prime Minister on their feet in the House of Assembly denied that they got any briefing notes, they were not advised of any recommendations that could have saved the Bahamian people what we now believe to be over $100 million that we are on the hook for,” he said during the press conference.

“The bottom line is he made the point that the prime minister and he were fully aware. I don't believe there's any other recourse for that minister, but to resign, it is the appropriate thing to do.”

He added: “More importantly, they have in fact, added pain and suffering to the Bahamian people by making a bad decision that has caused us over $100 million.

“When asked if he would consider a private meeting with the Prime Minister if offered, Mr Pintard said, “We have written (to) the Prime Minister on multiple occasions to be full partners with them during the COVID crisis, and on other matters.

“We were invited here once before, to a crime briefing, not a conclave. So, if it is going to be a meaningful meeting where we determine what we're going to discuss, we have access to the minutes that we get with them to craft that press release, so they do not put a spin on it.

“But if they are prepared to be transparent then, we're more than happy to work with any administration to improve the plight of the Bahamian people,” Mr Pintard said.

Before these remarks and in a discussion with officers at the Office of The Prime Minister, Mr Pintard pleaded with police officers to let him conduct a press conference on the lawn, instead of at the end of the parking lot. However officers refused saying they were acting on behalf of Commissioner of Police Clayton Fernander.

“At this point you are following instructions,” the FNM leader told officers on site. “So. I am asking is it perceived that the government or the police are at risk with us standing in close proximity to the building?

“With government buildings all over the country persons are able to stand outside peacefully and share their views, after all, the property is owned by all of us,” Mr Pintard said.

On Wednesday at Parliament, Mr Pintard accused Works and Utilities Minister Alfred Sears of “misleading Parliament” after he admitted that the Davis administration rejected proposals and recommendations “that had the potential to save the Bahamian people $100m.”

Mr Pintard told Tribune Business at the time that he and other opposition MPs were left “stunned” after Mr Sears said that the Ministry of Finance, headed by Prime Minister Philip “Brave” Davis, had dismissed recommendations to continue the trades, calling BPL’s fuel hedging initiative “not in the interests of the country at that time.”

Mr Sears responded: “The Minister of Finance communicated that based on what was presented, it was not supported. That determination was communicated in October 2021. What is the relevance of this new revelation?”

Mr Sears declined to speak further on the matter when approached by reporters at the House of Assembly on November 16.

This indeed does seem like a deliberate attempt to mislead parliament. They were very vocal about not knowing anything at all, now to find out there was a cabinet paper on it and it was rejected? There are two possibilities, they saw it and they mislead parliament or someone else running the government.

I wonder why commenting enabled on this story. I guess it makes the PLP look bad, that might be the criteria

I was wondering why so many news articles are comment disabled. Thought it was because the newspaper was under threat, got scared, and caved in to the threats. So, freedom of speech.....and citizens giving their opinions.... is the first thing to be eliminated. A dangerous precedent.

A newspaper's revenue is not so much derived from se;;ing newspapers but rather from sellig advertising space and publishing legal and government notices. And of course the Hon. Sears should certainly do the correct parliamentaty thing and resign, also he almost certainly will not resign.

Representatives of the Chinese Communist Party in The Bahamas are now dictating much of what the news outlets can and cannot say, and shutting down opposing voices of the Bahamian people. Our elected officials are puppets with their master puppeteers based in Beijing calling all the shots. Get used to living in a police state run by an authoritarian regime.

No need to ask for a resignation. These PLPs are shameless. You have to implicate them in the Supreme Court. Or sully their reputation to make them pariahs.

The now very dishonourable Sears sold his soul to the devil many years ago when he decided to lie in the same bed as the likes of Sebas Bastian and Craig Flowers.

Yes, he's the biggest fake in the house. My skin crawls when he stands and opens his mouth with his slow drawl.

Well Mr. Pintard, why don't YOU explain to The Bahamian People, IN DETAIL, what other Options they have to Fuel BPL & pass on the savings to the people. Instead of political manipulations. There Are Options as You and Others have been informed many times over. Explain Why the Fuel Oligarchs do not wish to affect their CashCow Shell. Explain To The People that these options have been available to 3 PAST ADMINISTRATIONS, PLP, FNM, & PLP once again. These are still there after 15years; think of the COST and BURDEN TO THE PEOPLE this inactivity has allowed? FPL OPTED FOR COMPRESSED NATURAL GAS IN 2009, 13 years back! GET WITH THE MODERN WORLD. Solar Power needs Large Expensive Storage Batter Capacity to be fully functional, it's time is coming, in 30yrs possibly. At this rate the Bahamian diaspora will outnumber those in your land.

Mr Sears is a good man bar none, Mr Pintard can not drag his old shoes , the FNM could have signed , Pintard is a man of toggie and boggie fame he would do well to stop showing off and see what he can do for the people of Marco city who voted for him they are still waiting for nothing

Mr Pintard is all about power he appears would do anything for power he does not care about the poor not when VAT was raised 60% remember them in their black shirt about the spy bill they made the bill worse and passed it , the dooms and the feeding program these fellows hands filthy dirty then they lock up poor people for going to the pump while they opened airports for the rich

Im not tied to either party but I appreciate facts. I doubt the FNM wrote the book on "crooked". They took power for the first time in 97. We went all through 25 drug years ...Norman's Cay, Joe Leader ... under Pindlings leadership