FACE TO FACE: ‘Godfather of the Flats’ committed to protecting our natural resources

PRESCOTT enjoys casting his line in the beautiful flats of Andros, Bahamas. 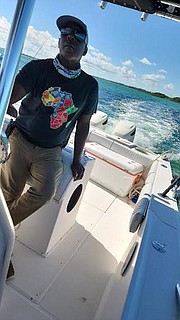 Prescott Smith is most popular for his love of fly fishing, but he also enjoys taking to the deep blue for big game fishing.

LONG before climate change, conservation and sustainability became the popular catch phrases that they are today, Prescott Smith was out in the world sounding a clarion call to protect natural resources. A native of Andros, The Bahamas, Prescott grew up in the place known for many natural wonders. As he roamed the flats and the pine forests, he fell in love with its beauty and learned the value of its existence. He continues to live there to this day, but his campaign for conservation extends from his homeland to the world. This month, Prescott’s decades of activism was recognised by the Caribbean and Gulf Fisheries Institute.

Minister of the Environment and Natural Resources (MENR) Vaughn P Miller, left, with Prescott Smith, right; the first Bahamian to win the Gladding Memorial Award for advocacy in fisheries. (Photo by Samantha Black)

He became the first Bahamian to receive the Gladding Memorial Award, which is only given to “fishers who have displayed an enduring vision for the sustainable and wise utilization of the world’s marine resources over the years”. For Prescott, his passion for Andros unfolded into an entire career in fly fishing. But, he couldn’t just consider it a lucrative enterprise for himself. He wanted to make sure that the pristine natural beauty of Andros - and The Bahamas - would be kept intact for generations to come.

Andros is considered by many as the bonefishing capital of the world. Fly fishers from all over the globe flock to Andros for a hearty sport of catch and release; hunting bonefish, tarpon, permit and other species - all abundant in The Bahamas. 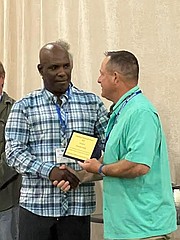 These fish dwell in some of the most extensive mangrove forests and estuaries in the world. It is also home to the third largest barrier reef in the world, which sits alongside the tongue of the Atlantic Ocean (a 6,000-foot drop), just off the eastern shore. Andros consists of North and Central Andros, Mangrove Cay and South Andros, and as such, it is an archipelago within the Bahamian archipelago. Andros also houses some 178 inland blue holes. It is the fifth largest island in the Caribbean. With sandy flats bordering the shore, Andros can be clearly seen from space and as such, astronauts have fallen in love with it, and consider it a symbol of the beauty of planet Earth.

With all that going for it, no wonder that Prescott continues to rave about his homeland to just about anyone willing to listen. He has met and guided billionaires and millionaires, celebrities and everyday people in his extensive career, which spans nearly 40 years. His love for fly fishing led him into conservation and activism. Today, he has inherited the title “godfather of the flats” after his father, the original world renowned bonefish angler, Charlie Smith. He serves as the president of the Bahamas Flyfishing Industry Association, which has a vision to partner with government, the travel trade, local communities and other relevant stakeholders to position the Islands of The Bahamas as the global leader in sustainable shallow water fly fishing.

He recalls a moment that helped to shape his vision even wider than his country: “I remember one time I was fishing on the flats with a female astronaut. She said to me, ‘Prescott, the United States Government is aware that you have the most extensive mangrove nursery system in the entire western world’. But what I recognized is that while we are the caretakers of that, it belongs to us all.”

His sentiments were echoed by the Minister of the Environment and Natural Resources (MENR), Vaughn P Miller, who travelled to Destin, Florida along with an entourage from MENR to witness Prescott receiving the award.

Minister Miller called him a “profound fisher, advocate, and influential conservationist”. He said Prescott has “always been passionate about the development of a grassroot conservation model” and he is an “advocate for policies and legislation that promote Bahamian ownership and participation”.

Most recently, through the BNRF, Prescott has been agitating to protect Andros from mining operations. The BNRF says that mining in Andros will explore 80 feet into the ground, when the freshwater lens extends to about 40ft. The freshwater lens is an important source of potable water. This is just one of many environmental campaigns he has brought to the fore over the years.

“This kind of information is not very much on the surface and it’s not easily available. As I kept digging deeper, I had to do global research on resources to see that the model is not just unique to The Bahamas. So even though you have a majority black government, you have to look at who is funding these elections. You have billions of dollars in limestone for example, and that is just one resource that is exported out of the country.”

He has taken his advocacy campaign global, and has appeared on numerous media outlets, including Fly Fishers International magazine, in which he was lauded for “fighting the good fight” for The Bahamas’ inshore fisheries and marine habitats. He was also featured on “What’s Up, Africa?” on Tempo TV.

Prescott’s interview in Fields and Stream Magazine highlighted the mining issue. The magazine reports that Michigan State geologist Sophia Huss believes mining in Andros could alter the water table and threaten local fisheries. She is working with a group of scientists to put together a policy brief for Bahamian lawmakers. She stated that blasting from mining is intense enough to register on the Richter scale, and would change the way that water moves through a very sensitive ecosystem. The article also notes that the Environmental Defense Fund values Andros’ ecosystem as one that “evolved over millions of years to produce fish in briny water” and that an altered salinity in the habitat could lead to “a crash in game fish populations”. The Bahamas Material Company is currently analyzing 53 monitoring wells in North Andros and conducting electromagnetic surveys to map out the delicate limestone foundations of Andros. The project has been in development for the past 16 years and during that time, the proposed mining site has been moved twice, as president of the company Cameron Symonette says they remain “deeply committed” to careful research.

Environment Minister Miller, addressing the Caribbean and Gulf Fisheries Institute during its November 7 to 11, 2022 conference, said that fly fishing generates $140 million per annum for The Bahamas, according to an economic survey executed a few years ago.

“There is a belief that the country’s fly fishing industry has the potential of being A multi-billion-dollar industry in the future, once sustainably maintained,” Minister Miller said.

“Consequently, our country can reap tremendous benefits from exploring this sector, and it has been noted by many that the fly fishing industry in the Bahamas has the potential to become more lucrative, in comparison, than the traditional tourism sectors such as cruise ships, hotels, sun, sand, and restaurants.”

He added that fly fishing has the potential to generate “even as much as $500 million annually, particularly in the Family Islands, where most of these small businesses exist as guides and lodges”.

Prescott is not just a veteran angler and conservationist. He is also the owner of the Stafford Creek Lodge in North Andros. He is one of the sons of Charles “Crazy Charles” or “Bonefish Charles” Smith, a pioneer in flats fishing in the country, and founder of Charlie’s Haven in Behring Point, Andros. Prescott grew up in Staniard Creek Andros, then moved to New Providence for High School, where he graduated from RM Bailey Senior High.

After graduation, he worked for several years with his father at Charlie’s Haven. Later, he trained and was accepted into the Royal Bahamas Defence Force. He worked there as an engineer for six years, helping to maintain the boat engines for its fleet. Prescott had dreams of leaving Nassau to study to become an airline pilot, but he got side tracked by his brother Andy, who encouraged him to open the Stafford Creek Lodge and keep up the family tradition. This led to his lifetime calling. He now holds a Master’s A Captain’s license and is a marine mechanical engineer, a certified scuba diver, a fly casting instructor with the Fly Fishing Federation of Montana, and a Master Instructor of Fly Fishing at Daytona University. But no matter where he roams, Andros - and Stafford Creek Lodge - is his home.

The Stafford Creek Lodge has a unique philosophy. Fly fishing guides are treated with the same level of respect and consideration as the guests. For example, guides sit and eat with their clients at the end of the day. If the guests have lobster, then so do the guides. The aspiration of the lodge is for all involved - staff and guests, to be treated with a high level of respect. Guides are invited to socialize with clients, and all of the amenities at the lodge are available to staff and guides, as well as to their beloved guests. This is a cardinal value, because Prescott aims to destroy the “two-tier hierarchy” that exists in many industries.

Stafford Creek Lodge has assisted and facilitated programmes that expose Bahamian youth to the fly fishing environment. The lodge once hosted students from Akhepran International Academy. It also hosted an Island Stewards Camp for kids from Bain and Grants Town in New Providence, led by the Indaba Project. Most recently, Prescott is steering the fly fishing course for young Bahamians ages 25 and under, launched by the Bahamas Agriculture and Marine Science Institute (BAMSI). Since 1994, he has been a master instructor of the National Guides Certification Programme, teaching courses in fly casting, the flats environment, and bonefish biology.