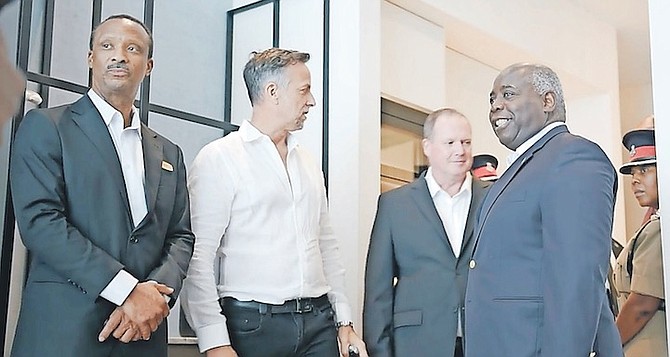 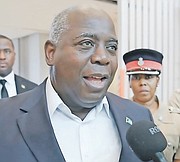 He was accompanied by Works and Utilities Minister Alfred Sears and other officials.

He spoke in a video released by the Office of the Prime Minister yesterday. 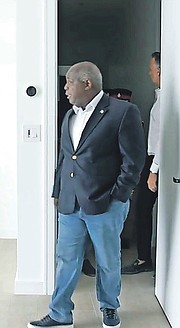 “I remember when it was just a mere house there, two houses that were situated on this property and to see what the property has been converted to. It’s just a wonderful display of what I call Bahamian ingenuity and I like to see the amount of Bahamians that are here working and at one time, there was a lot of doubts as to whether or not this could’ve happened and behold it has happened.”

Mr Davis went on to praise the project’s developer, Paul Wynn, and his team, adding: “They have done a wonderful job.”

He continued: “The workmanship is impeccable, exquisite and I’m sure the residents here will have an exquisite experience.”

The Prime Minister also described the project as a true demonstration of the growing investors’ confidence in The Bahamas.

“It will all go well for our economy because I’m advised that they will be hiring at least 200 plus workers here on the property. They are about to start another phase of this next door so this is another boom for the economy and for that, I would like to thank the investors and the developer for their continued confidence in this country,” he said.

John Adams, the property’s chief operating officer, spoke about the make-up of the condo hotel.

“We’re referred to as a condo hotel so we’re 81 keys on the hotel, meaning we have 81 residential suites. We have studios, one-bedroom, two-bedroom and some luxurious three-bedroom suites and on the residential side, we have 79 residential suites for owners to live in full time to be residents here in The Bahamas,” he said.

He also revealed that officials intend to “go live” for the property’s first paying guests next February.

It’s core market, he added, will mostly be US citizens along with Canadians.

“Starting February, we’re looking to ramp up slowly,” he said when asked about their forecasted occupancy levels.

“We want to make sure that we do it right and that we find our stride. We want to create a truly customer centric experience so we’re going to be a little bit apprehensive to just go guns a blazing, but we’re going to target for an overall average for year, we want to target about 65 per cent occupancy.”

The location of the property is across from the Office of the Prime Minister.